An Interview with JAMES MAXEY 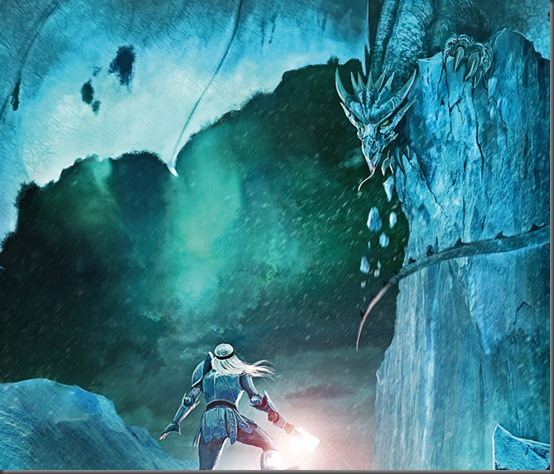 James Maxey’s Dragon Apocalypse is a series I have been eager to read for a long while. It has been one of many victims of Kindle Invisibility Syndrome (I bought Greatshadow soon after it came out). Now that I have acquired Hush and Witchbreaker, I’ll be sure to blitz through the series, which so many reviewers (many of whom share my tastes in this sub-genre) have enjoyed. So, without further ado, let’s get to the questions…

Let’s start with an introduction: Who is James Maxey?

I'm a guy who daydreams a lot and has enough discipline to write down some of the crazy stuff that crosses my mind.

Your latest trilogy, Dragon Apocalypse, has been published by Solaris. How would you introduce the series to a potential reader?

First, I refrain from calling it a trilogy, and usually only refer to it as a series. The three books out now constitute one arc of a larger story, but there will definitely be future books featuring these characters. It’s a big world with lots of potential, and my eventual story-arc covers decades.

My short pitch for the series is that it’s “X-men meets Tolkien”. The setting and scope of the tale are definitely epic fantasy, but the characters – and to some degree the plot lines – are more superhero inspired. Every major character in the series has some kind of superpower. Instead of battling super villains, they battle dragons, and also each other. 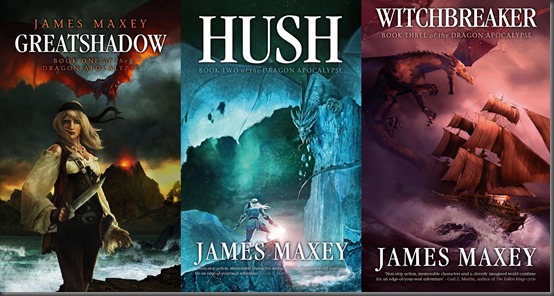 The first book, Greatshadow, is mainly the story of Infidel, a woman with a mysterious past who is super strong and invulnerable. The story is told by Stagger, her best friend, who is secretly in love with her but never confesses his love until the moment of his death in the middle of the first chapter, after he’s accidentally been stabbed with his own knife. His spirit winds up tied to the knife that killed him, so that he winds up haunting Infidel, witnessing her trying to carry on with her life. After Stagger dies, she feels like she’s done with the life of a vagabond mercenary, and wants to make one last big score so she can be insanely wealthy and retire in peace. To do this, she joins up with a hunt to kill Greatshadow, the primal dragon of fire, with the goal of looting his legendary treasure trove. However, the hunt is being organized by the Church of the Book, the dominant religion of the land and the group responsible for her bearing the nick-name “Infidel”. She has to join a party of knights and priests sworn to kill her if they ever learned her true identity. Complicating matters even further, the leader of the dragon hunt is the legendary knight Lord Tower – the man she left standing at the alter near fifteen years before. Hijinks ensue. It’s a love story.

My previous series, the Dragon Age (not related to the video game), was actually science fiction in fantasy drag. Everything in the books has the look of epic fantasy, but underneath it all there's scientific explanations grounding how our world became the world of Bitterwood. Having written all those epic fantasy books without any recourse to magic, I wanted to go in the opposite direction and create a world where science just doesn't have any say in the rules. So, instead of the sun being a giant ball of burning gas, the sun is actually a dragon named Glorious who flies across the sky at the same time every day because he's kind of obsessive compulsive. Also, the Bitterwood novels were fairly gritty, with a few moments of humor, but mostly a very serious tone. The Dragon Apocalypse is much more humorous. It’s not a parody of the fantasy genre, but it does have a lot of fun playing with some of the more absurdist underpinnings inherent to all fantasy. 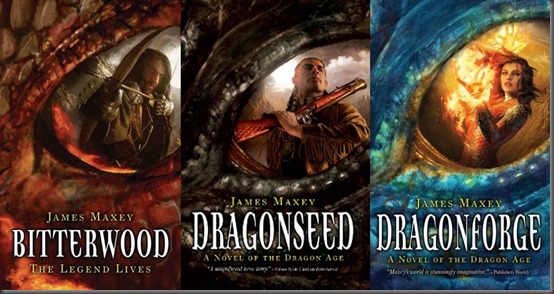 Comic books, mostly. Once I discovered superheroes, it was all over for me. My mother worried reading all those "funny books" would warp my mind. Boy, was she right! From comic books, I branched out into reading a lot of science fiction in high school, branching out into more fantasy in college, then, for a long time, settling into reading mostly non-fiction about science, history, geography, etc. I get much more day dream fuel out of reading about the real world than I do reading about made up places.

The Dragon Apocalypse novels are your second series to feature dragons prominently. What draws you in particular to dragons?

As you might suspect from my reading material, I’m something of a nerd. From the time I was in high school until well into my 30s, I played AD&D religiously. Usually, I was DM, so I got to play the roles of all the dragons and other monsters the players would fight. And, dragons really had a lot of questions surrounding them. Just what did they want all that treasure for? If they could talk, did that imply culture? They were pretty smart, genius level in fact, and a lot tougher and stronger than humans. Why weren’t they running the world? Eventually, these musings laid the groundwork for the novels I would go on to write.

One specific writing practice I engage in is that I never look back. Once I start writing a book, I never read any of the first draft until I get to the end. Forward is the only direction. Also, I try to write as swiftly as possible, since I really think momentum matters. The faster I write, the better the story flows. I get into zones where my own thoughts go silent and it’s like I can hear the characters talking to one another. Which, arguable, is a symptom of an undiagnosed mental illness, but let’s not go there.

As to whether I enjoy it... well, yeah. People often ask me what I’m smiling about, when I’m just sitting around looking like I’m doing nothing. What I’m usually smiling at is something funny one of my characters just said in my head. I hope I never reach an age where I outgrow my imaginary friends.

I wrote a lot of short stories in high school, then a lot of terrible poetry in college. When I was 25, I put butt in chair and vowed to write a novel. It took me two years to accumulate 60,000 words. It was unrelentingly awful in just about every aspect. The characters were cardboard, the plot was random, the style was pretentious and opaque. The best thing about the book is that it taught me a lot about how not to write a book. Failure can be a great roadmap to success.

I confess, I read almost no current fiction. I used to write a book review column for Intergalactic Medicine Show, and reading nothing but new releases for a couple of years left me yearning to read some older material, stuff I’d always meant to get around to reading, but somehow never had. These days, I’m reading classics almost exclusively. Just this week, I finished A Princess of Mars by Edgar Rice Burroughs, and now I’m reading King Solomon’s Mines by H. Rider Haggard. I’ve got a warm place in my heart for these older pulp novels. There’s something charming about reading books from an era when people were still creating the genres of fantasy and science fiction. 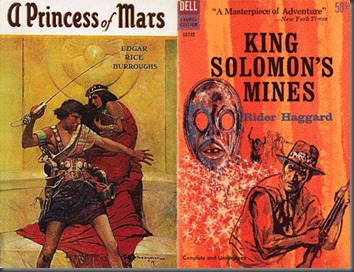 As to where my work fits in, I’d say the writer I’m most often compared to is Terry Pratchett. I mix humor, action, and philosophy and try not to take my books too seriously, while also taking care not to slip into slap-dash silliness. I never want to let the humor get in the way of you caring for a character or undercutting what’s at stake in the plot. Ultimately, I write books that I want to read. I think that my pulp fiction affinities are pretty evident on the page, with my emphasis on larger than life characters having big adventures against exotic landscapes.

My debut novel was a superhero tale called Nobody Gets the Girl, which came out ten years ago this October. I’ll be celebrating the anniversary with a new print edition of the book this October that will include a new story set in that world. After that, I’m kind of at the mercy of publishers to find out what’s coming out next. I’ve got a steampunk novel under consideration by a couple of publishers, and recently finished the first draft of a new superhero novel called Accidental Gods that I’ll be shopping around soon. While those books are working though the publishing pipeline, I plan to work on a new Dragon Apocalypse novel.

In addition to the pulp novels, I recently read One Flew Over the Cuckoo’s Nest and reread On the Road. On my daily commute, I’m listening to Jane Eyre as an audiobook. My most recent non-fiction was Gulp by Mary Roach, and I just today bought a book called Wretched Writing, which is about, you know, wretched writing. Lately, I’ve been working on three books at once; an audio book while driving, a bedtime book I read on my Kindle, and some kind of non-fiction paperback on hand for the times when I have little snippets of time to kill.

This July, I wrote an entire first draft of a novel in just 4 days. (The superhero novel I mentioned, Accidental Gods.) Admittedly, non-consecutive days, Monday, Wednesday, Friday, and the following Monday. Four fifteen hour sessions of just typing as fast as I could to never let the story lose it’s flow. I had a small window of time where my old day job ended and my new day job hadn’t started, and wanted to find out if I could use the intervening days for something productive. Now, I entertain fantasies of locking myself in a cabin with a bottle of tequila and a laptop with no internet connection for one long weekend and seeing what I might emerge with...

In March, I turn 50. I’m going to have a huge party the night before, then, the next day, celebrate by taking a 50 mile bike ride. I’ve been building up to it all summer; so far, the longest distance I’ve done is 30 miles, but I think with another six months of training I’ll be able to do it.

Be sure to check out James Maxey’s website for information about his novels. In addition, The Dragon Apocalypse was recently collected into a handy omnibus eBook. 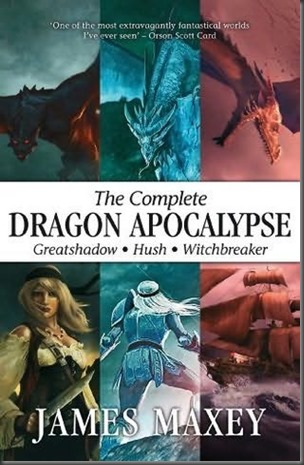