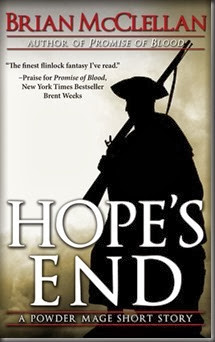 Captain Verundish has two problems. On campaign with the Adran army and far from her homeland, she is helpless when the young daughter she left at home is threatened. To make matters worse, General Tamas has put her lover in command of a Hope’s End — the first charge through a breach straight into the teeth of enemy cannon and sorcery. To save the people she loves, Verundish will have to come up with a deadly solution...

This is a pretty interesting story. A “Hope’s End” is the first charge against a fortress or other reinforced emplacement. It is pretty much guaranteed death. Tamas likes to select those who bought their commissions to lead these hopeless endeavours. In this case, however, Captain Verundish is in love with the man chosen to lead the next Hope’s End. With trouble back home (her husband is an asshole, and threatening the welfare of her daughter), the story actually opens with her contemplating suicide. Instead, she decides to volunteer to take over the Hope’s End, with the expectation of dying and guaranteeing her daughter’s financial future. Naturally, not all plans go according to plan.

Anyone who was disappointed at the lack of female characters in Promise of Blood will be pleased with Captain Verundish. She’s an interesting character, and I like the way she handles the personal and professional tests she’s presented with. The battle scene is pretty good, too – it’s focused, tightly-plotted, and not over-written. It is followed by an example of how good a leader Tamas is off the battlefield. It’s nice that McClellan has actually paid attention to developing our understanding of why Tamas is such a beloved leader – rather than just telling us that he is, and letting that be the end of it. It’s a good story. (This is set when Tamas’s son, Taniel, is only two years old.)

Well written, this is another good introduction to McClellan’s writing and fantasy world. I really like the way the author has been releasing these short stories to add more to our overall picture and understanding of the pre-coup world. Certainly recommended, and a must-read for fans of the novel. This has only increased my anticipation for The Crimson Campaign… 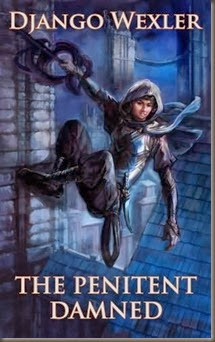 THE PENITENT DAMNED by Django Wexler

Alex is a master thief, with dark magic to give her an edge. When she goes up against Duke Orlanko’s Concordat secret police, though, she may have taken on more than she bargained for...

I read Wexler’s The Thousand Names recently, and thought it was a very interesting start to a new series. In The Penitent Damned, the author takes us far from the location of his novel, and back to a city under control of Duke Orlanko. Alex, the protagonist, has always had special abilities which have given her an edge in her chosen profession. Schooled by a former master-thief, she has taken a job in the city. Frustratingly, to go into much more detail about the story will ruin it (it’s a very short story). We get a glimpse of more of what is going on behind the scenes. We learn just a little bit more about certain events at the end of The Thousand Names, which opens up some intriguing possibilities for the next book in the series. All very cryptic, but I think if you read the novel, and then this short story, you’ll see why I don’t want to go into too much detail. We get to see more magic in action, this time around (which didn’t feature as much in Thousand Names). And it was very cool, giving rise to some good action scenes.

Even if you haven’t read the novel, though, this is a pretty good introduction to Wexler’s writing style and fantasy world. I’d recommend it to anyone who hasn’t yet decided if they want to read The Thousand Names, as well as fans of the novel. Wexler is, I believe, definitely an author to watch. A very satisfactory short story, discussed in a rather unsatisfactory review. Sorry about that.

Posted by Civilian Reader at 7:31 PM