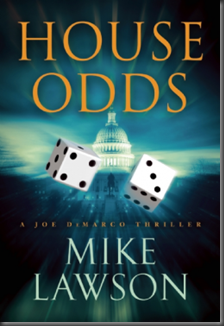 Washington D.C. fixer Joe DeMarco has been asked to handle a lot of difficult situations over the years for his boss, congressman John Mahoney. But nothing has ever been quite so politically sensitive, or has hit so close to home, as the task Mahoney hands DeMarco now.

Mahoney’s daughter, Molly, has been arrested and charged with insider trading. An engineer with a high-flying technology firm, she allegedly placed a half-million dollar bet on one of the firm’s clients. DeMarco’s job is to clear Molly’s name and keep his boss clean. But how did Molly get her hands on so much money to invest in the first place? Before long, DeMarco uncovers that there’s far more to Molly’s case than meets the eye, and the risk to Mahoney is more than just a little political embarrassment.

In this eighth novel featuring Congressional fixer Joe DeMarco, we get a look at the sordid underbelly of Beltway politics, complete with manipulative gangsters and politicians, crooks and thieves. I’m a big fan of this series, ever since I read the first in the series, The Inside Ring in a single day. Each new novel has been an addictive, well-written and expertly-plotted thriller. House Odds is no exception.

The synopsis does a great job of providing all of the information you need, so I’m not going to go any deeper than that, and keep the review short. House Odds hooked me from the start, and yet kept me guessing until the end. Things do not play out at all as I expected, as DeMarco comes across a number of liars, conflicting agendas, hidden motives, and the desperation of a powerful family brought low. It’s a novel filled with grey, and very little black or white. Lawson isn’t afraid to let the muck stick to both his protagonists and antagonists, which makes this a very satisfying and more realistic read.

Throughout the novel, as DeMarco tries to first get to the bottom of what Molly allegedly did, to then trying to get her off the hook, he is left questioning who, in fact, are the good guys. The plot is winding, and perhaps more so than previous books in the series, as Lawson keeps us guessing. The first half deals with one mystery, and the second half another, as our hero is faced with a near-impossible job. Strange alliances will be forged, threats will be made, and leverage will be exercised. House Odds shows us just how dirty politics can be.

As with Lawson’s previous DeMarco novels, there’s plenty of good commentary on the American political system – especially the egos involved. In addition, his characters are well-rounded and realistic. The author’s prose is stripped down, streamlined, and well-composed. The plotting is excellent, too, and I blitzed through this.

I really can’t recommend this series enough. If you have any interest in thrillers set in and around the world of American politics, then Mike Lawson is a must read. House Odds is excellent. Very highly recommended.

Posted by Civilian Reader at 10:30 AM