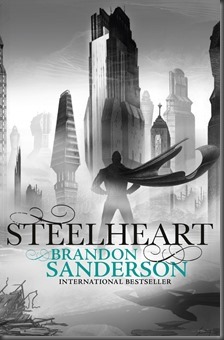 I’m going to keep this review pretty short. As a big fan of comic books and super-heroes, I was very intrigued to see what Brandon Sanderson – best known for his magic-heavy, epic high fantasy tomes – would come up with. As it turns out, Steelheart is a fun, quick-paced super-hero novel. It’s a good novel, with an interesting hook, but it is by no means perfect. While I had a couple of niggles, they were easily overlooked based on the strength of the pacing and streamlined prose.

Superhero villains! This has become a popular idea (for my money, the best example is Mark Waid’s Irredeemable comic series). Sanderson manages to pull this off with aplomb. The plot moves at a quick pace, and Sanderson’s direct prose grabbed me from the opening scene. The story opens in a bank, and we learn that the superheroes – or, “Epics”, as they’re known in this reality – are not all about truth, justice and equality for all. Instead, they are pretty much just about getting what they want, when they want. And everyone else is just an inconvenience, a pawn to used and discarded, or an obstacle to be destroyed. In many ways, there’s something about this cynical approach to super-powers that rings more true than the utopian portrayals often found in comic books: human nature is far more likely to make those with super-powers work on behalf of their own selfish desires than for the good of others. [But then, I am eternally cynical…]

There’s a pecking order to the Epics, based on their broad range of abilities, as well as how many they have. It seemed to me like Sanderson put plenty of effort into devising the “system” of super-powers of this world – not as much as he might for a magic system in his fantasy novels, but he appears to have thought of everything and put more thought into the ‘rules’ than many writers do. The detail he offers in the story – of how the powers work, how some Epics have complementary powers, and also their weaknesses – is very well-woven into the narrative, and I never felt like I was being fed an info-dump (although, there were a couple of instances when things came close…). 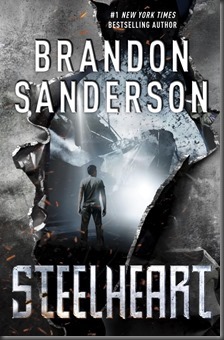 I liked the idea of our (non-super-)hero, David, being there when Steelheart bled. The momentous, covered-up event that has fuelled his quest for retribution against the Epics, and Steelheart in particular. It has dictated almost everything he has done, including collecting perhaps the largest ‘repository’ of information on these oppressing Epics. The novel follows his quest for vengeance, and along the way we meet plenty of interesting and colourful characters. Some of them are a bit thin, but they are never dull. David himself is an interesting guide, although his apparent fetishisation of guns left me feeling somewhat uncomfortable. He hooks up with the Reckoners, a group of insurgents who are acting against the Epics in any way they can – attempting to take them out where possible, but equally content to just upset their various plans. Steelheart is the ultimate target, and with the help of David, they think they may have come up with a way to take him and his inner circle of uber-Epics down. There’s action, a bit of suspense, much plotting, some sneaking about, and a huge climax. There’s also a rather under-developed ‘romantic’ possibility, but that seemed like an afterthought, and was therefore a little predictable.

Sanderson’s prose, as anyone familiar with his work would expect, is very well-crafted. It’s focused, fluid and not at all over-done. I’m still very behind on my Sanderson reading (which I’ve mentioned a number of times here on CR), but after reading this, I am even more eager to get to Mistborn and even the Stormlight Archive (ten epic-length fantasy novels…? Usually, that would be a very scary proposition, especially when only the second novel is coming out this year), not to mention Brandon’s stand-alone novels, Warbreaker and Elantris.

If you like super-hero fiction and comic books, or are a fan of Brandon Sanderson, or even if you’re just a fan of science-fiction and speculative fiction, then Steelheart should certainly entertain. It’s a quick read, but an enjoyable one. The pacing does mean Sanderson doesn’t give himself much time to really get into the characters’ heads, which was unfortunate. I would have liked to have learned more about David’s comrades and their pasts. Maybe in the next book? Steelheart could also function as a good introduction to Sanderson’s work and writing. It’s certainly worth picking up. I hope we get to more novels set in this reality in the not-too-distant-future.