Upcoming: “The Dark Blood of Poppies” by Freda Warrington (Titan) 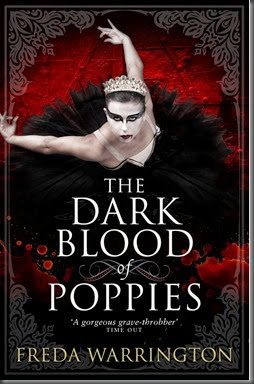 I’m intrigued by Freda Warrington’s Blood Wine series. It was first released near the height of the vampire vogue – authors such as Anne Rice had established the genre as far more varied and ambitious that mere heaving bosoms and strained bodices. This year, Titan Books began re-issuing the series, which started with A Taste of Blood Wine (A Dance in Blood Velvet is due to hit shelves in October 2013). Last week, this cover for the third novel in the series was unveiled. And it’s another stunning, attention-grabbing one, too.

Here’s the original synopsis, from the 1996 edition (which I nabbed from the author’s website) – I don’t know if Titan will be changing it for their 2014 edition, but I assume it won’t be too different:

The ballerina Violette Lenoir has fallen victim to the bite of the vampire Charlotte. Her fire and energy have fuelled a terrifying change and a dreadful realisation; that Violette has become Lilith, the demon mother of all vampires.

Haunted both by what she has done and by Violette’s dark sensuality, Charlotte and her immortal lover Karl are drawn towards the dancer and the terrible destiny that has fallen on her shoulders.

But other, far more dangerous shadows are gathering around Violette. To the vampire Sebastian and to the dark heirs of Kristian, she threatens to wreak havoc with their plans to bring all of mankind under their dark wings.

Innocently embroiled in the endgame, courtesan extraordinaire Robyn Stafford finally meets her match as she is torn between the two ultimate lovers: Sebastian, and Violette ...

As someone pointed out on Twitter, that is a very Black Metal cover – everything from the title to the model’s make-up does remind me of band photos from Terrorizer and Metal Hammer… It also has a smidgeon of Black Swan in there (ok, a fair bit…). I’m intrigued to read this series, and luckily I have the first book on my tottering TBR Mountain. I’ll hopefully get to it at some point in the not-too-distant future.

The Dark Blood of Poppies is due to be published by Titan Books in April 2014. A new, fourth novel in the series – The Dark Arts of Blood – is also meant to be coming out next year (October).