Still haven’t been reviewing as many comics as I had been earlier in the year, but I recently started reading two very good series – one brand new and on-going (Constantine), one already completed (Lucifer). I enjoyed them both very much, so I thought I’d show them some brief love on the blog.

Liar, cheater, manipulator... John Constantine is all of these, and yet he uses these skills and more to protect the world from the darkest corners of the DC Universe.

Spinning out of both Hellblazer (which spanned 300 issues, and was Vertigo’s longest-running series) and also Justice League Dark, this series gives John Constantine its entire attention. I’ve only dipped in to Hellblazer, and certainly haven’t read nearly enough to consider myself overly familiar with the character or conversant with his part, but I enjoyed what I had read. The dark focus on the occult and supernatural were like catnip to me, and they were also what made me try Justice League Dark (which I have been enjoying quite a bit, too). 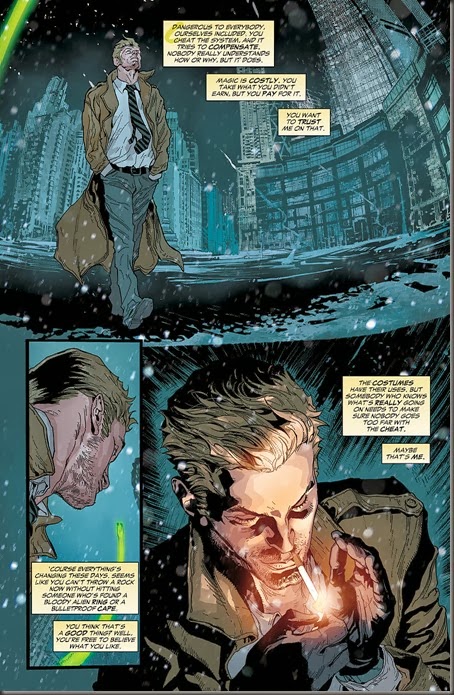 This series is written by Jeff Lemire, who also recently took over JL Dark. It’s a really good opening to the new series, I think, and we get a good introduction to Constantine’s character. It’s dark, deliciously so, and Constantine is his charming-anti-hero-self throughout. He’s not afraid of sacrificing others for the “greater good”, either – making him not a whole lot better than his antagonists. The end of #1 was particularly gruesome and startling, but these four issues are filled with visually and narratively stunning work. The main villains in this particular story (still incomplete at this stage) is the Cult of the Cold Flame, who have cropped up in JL Dark, too. I’ll certainly be reading more of this series. Recommended.

(Issue #5 is part of the Trinity War story-line, so I’ll be reviewing that as part of an Event review, in a few weeks’ time.) 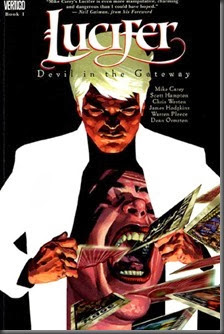 From the pages of THE SANDMAN, Lucifer Morningstar, the former Lord of Hell, is unexpectedly called back into action when he receives a mission from Heaven. Given free reign to use any means necessary, Lucifer is promised a prize of his own choosing if he fulfills this holy request. But once he completes his mission, the Prince of Darkness’ demand shakes the foundation of Heaven and Hell. Now as his enemies unite to stop his reemergence, Lucifer gathers his forces as he prepares to launch his new revolution.

This is an excellent, independently intelligible spin-off from Neil Gaiman’s Sandman (of which I have only read the first book).

In the first of these two story-arcs, we join Lucifer at his Los Angeles club, Lux. I’m not really sure how to review this book. It’s excellent, certainly, and wonderfully dark. It reminded me of Richard Kadrey’s Sandman Slim series (which is excellent and highly recommended). Lucifer is called up to help out Heaven one last time, in return for a particularly generous reward. The former Lord of Hell sets off on a very strange, dream-like journey. People’s wishes are coming true, and the consequences are starting to become devastating. Teaming up with a “victim” of this plague of wish-granting, Lucifer needs to get to the bottom of the mystery, before the world wishes itself into chaos.

In the second story, the first of Lucifer proper, we begin in Hamburg, where a set of mystical Tarot cards tries to influence the world around it. We get some neo-Nazis, hate crimes, and all of the seven deadly sins exaggerated and enhanced by the influence of the Tarot cards. Lucifer intervenes, in order to bring balance back to the world.

I really liked the alternative location – for once, we weren’t in the USA or UK, which I certainly welcomed. It’s still early days, but we start to see how the series will shape up in the future. I don’t want to spoil things (from either of the two stories), so this is perhaps a rather thin, unsatisfactory review. Nevertheless, I think this is an essential read for anyone with a taste for the darker sides of fiction and comics. Heaven and Hell are popular tropes in speculative fiction, but Lucifer Vol.1 offers a genuinely original spin, and is both written and visualised brilliantly.

I liked this so much, I bought volume two before I had even finished it. I’ll be starting that very soon indeed, so will hopefully have a review up in the next week or two. Deliciously dark, this is a must-read. 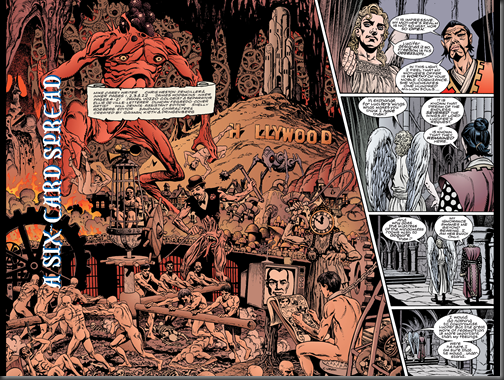