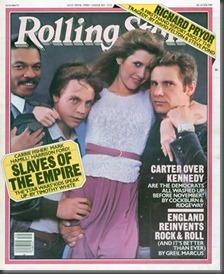 While perusing Rolling Stone’s website (something I do frequently), I spotted a link for “Star Wars in Rolling Stone”. It’s a collection of the articles from the magazine, beginning with an interview with George Lucas from 1977. They’re presented in reverse-chronology, so I’d start with the final page (linked above) and work from there.

One article in particular jumped out for me – partly because of the title – and that was from the June 12th, 1980 issue of the magazine (pictured): “Slaves to the Empire: The 'Star Wars' Kids Talk Back”, by Timothy White. The article is about (according to the standfirst):

“Five actors caught in the paradox of ‘Star Wars’ (the highest-grossing film of all time has done nothing for their careers) talk about their trap, the making of ‘The Empire Strikes Back’ and why they still want to be a part of the third installment”

It’s an interesting interview, more about their opinions about the movies, working on them, and where they came from, than about being “trapped” by the films’ success. It’s filled with some great trivia for die-hard Star Wars fans. For example: Carrie Fisher is quite mischievous, and suggests that Leia should have fallen for Chewbacca; Mark Hamill considered Luke to be the “classic thankless role”, confesses that he is a “serious collector” of Star Wars memorabilia, and amusingly bemoans the fact that the Luke dolls have been marked down in price for collectors; Anthony Daniels (C-3PO) explains why the first movie was a “miasma of pain”; Harrison Ford sheepishly admits that he’s “never been much of a film fan” but felt like Empire Strikes Back was "the first time I’ve ever seen anything I’ve done that I’m happy with".

The piece also addresses Mark Hamill’s car accident, and is actually the first time I’ve read anything about it:

“Hamill's anxiety about landing choice roles was tragically accelerated when his BMW ran off the freeway in 1977. Star Wars had not yet been released, and his face was sufficiently ravaged that he wondered whether he would be able to retain any part of his angular good looks, let alone fulfill the remainder of his three-picture deal with Lucas. That mental anguish was only intensified when the film proved to be an international smash.”

Posted by Civilian Reader at 12:02 AM