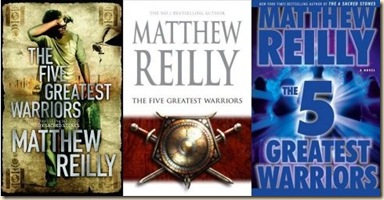 It began with Six Sacred Stones and the Seven Ancient Wonders. Jack West Jr. and his loyal team of international specialists are in desperate disarray: they've been separated, their mission is in tatters, and Jack was last seen plummeting down a fathomless abyss. After surviving his deadly fall, Jack must now race against his many enemies to locate and set in place the remaining pieces of The Machine before the coming Armageddon.

As the world teeters on the brink of destruction, West will learn of the Five Warriors, the individuals who throughout history have been most intimately connected to his quest.

Scores will be settled, fathers will fight sons, brothers will battle brothers, and Jack and his friends will soon find out exactly what the end of the world looks like...

I have long been a fan of Matthew Reilly’s novels. They are exciting, filled with over-the-top action and are simply great fun to read. Five Greatest Warriors is the next in Reilly’s Jack West Jnr series, and it certainly lived up to all my expectations. As always, however, it is difficult to write a review without spoiling the ending…

First off, Reilly provides a handy re-cap for those who may have forgotten the story so far. Immediately afterwards, we rejoin West as he plummets down an immense shaft below the second “vertex” that forms part of The Machine that will save the world. After his incredible solution to this predicament, he is reunited with his team of international specialist – Zoe, Sky Monster, Pooh Bear, Stretch, Wizard, the Lachlan twins (they all have call-signs, but they aren’t always referred to as such), and Lily (Jack’s adopted daughter, who featured very prominently in Seven Ancient Wonders). From then on, the story never stops or lets up, as we are taken all over the world in West & Co.’s quest to locate the remaining sacred stones and vertices.

This international treasure hunt take place while the team also has to contend with rival factions intent on beating them to the prize for their own nefarious ends: Jack’s father, Wolf, and his military-industrial-complex-like private army; the Japanese doomsday cult, the Blood Brothers; and the Chinese army. West and his friends must deal with betrayals, heart-wrenching loss, constant frustration, and the endless ticking of a doomsday clock that could spell the end of humanity.

In the interview included after the novel, the author says:

“I just keep trying to top myself with each book and come up with the fastest most out-of-control action-adventure stories imaginable.”

Five Greatest Warriors definitely fits into Reilly’s plan. It certainly manages to up the action quotient, increasing the thrills and adventure (and suspending reality and belief just a little more) to even greater levels than before. It’s cliché to say so, but this is a whirlwind of a novel. Perhaps only dropping in pace once or twice when some needed back-story is needed, as Reilly juggles ever more simultaneous storylines.

Reilly’s plotting is extremely fast-paced, and this is one of the fastest novels I’ve ever read. The story rattles along at an incredible speed, each chapter and segment providing just enough to draw the reader on and on through the novel. I read this in a couple of sittings, each one keeping me up past 5am! It’s not just a matter of good pacing, however, as Reilly’s writing is also very assured and well-crafted. Perhaps my only criticisms would be his use of italics for certain adjectives and superlatives, which seem unnecessary, and the occasional submission to the call of schmaltz. (Admittedly, these are minor criticisms, and don’t detract from the enjoyment of the novel.)

Reilly will likely never win any literary awards, but his novels are such escapist fun, that it’s a crime to know authors like Dan Brown are out there getting all the glory. If you want a novel filled with action, adventure, a pinch of conspiracy and an entertaining take on ancient history, then anything by Reilly is a good bet – it’s as if Indiana Jones were directed by either Jerry Bruckheimer or Michael Bay, with a budget far larger than normal.

A book you can live vicariously through, Reilly’s Jack West Jr. series is highly recommended.

Posted by Civilian Reader at 8:10 AM