Spotted the UK cover in Forbidden Planet in London today, and was moved to share it on here. I’ve been aware of R.S. Belcher’s The Six-Gun Tarot since it came out in the US (published by Tor), but it seems to have also been quietly released in the UK, recently, by Titan Books. Here are the two covers… 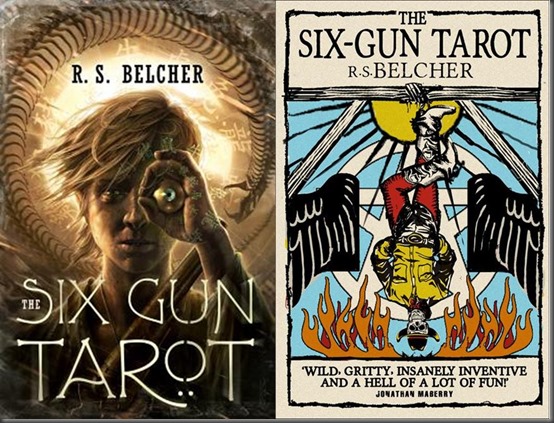 Out of the two, I definitely prefer the UK cover (on the right). Really cool. If that doesn’t grab your attention, here’s the synopsis:

Nevada, 1869: Beyond the pitiless 40-Mile Desert lies Golgotha, a cattle town that hides more than its share of unnatural secrets. The sheriff bears the mark of the noose around his neck; some say he is a dead man whose time has not yet come. His half-human deputy is kin to coyotes. The mayor guards a hoard of mythical treasures. A banker’s wife belongs to a secret order of assassins. And a shady saloon owner, whose fingers are in everyone’s business, may know more about the town’s true origins than he’s letting on.

A haven for the blessed and the damned, Golgotha has known many strange events, but nothing like the primordial darkness stirring in the abandoned silver mine overlooking the town. Bleeding midnight, an ancient evil is spilling into the world, and unless the sheriff and his posse can saddle up in time, Golgotha will have seen its last dawn…and so will all of Creation.

I’ll be sure to review it as soon as possible (I already have it).