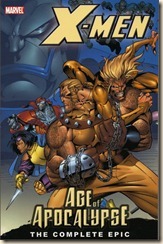 In a cracked-mirror world ruled by the genocidal mutant despot Apocalypse, only one hope remains: Magneto and his Astonishing X-Men!

This is the second graphic novel I’ve read, as part of my attempt to get back into reading comics and reacquainting myself with some of my favourite characters from my youth. While I was disappointed by All Star Superman, reading this was an entirely different experience. It’s only book one-of-four, but it’s a considerable tome, and one that was enjoyable throughout.

The Age of Apocalypse follows an interesting premise, set in an alternative time-line: in this world, Charles Xavier gave his life to save Magneto, who has taken on the mantle of champion in this universe, rather than a villain, and dedicated his life to the cause his friend would have pursued.

I actually thought the story was pretty good. With Apocalypse taking over, instigating a human genocide, the X-Men/Marvel world as we know it is very different. Magneto is quite a tragic figure in this telling – the loss of his best friend and another loved one weigh heavy, but also inspire him to be good and ever-better (there are occasional moments of ruthlessness that come out, so he’s not completely different to how we know him from other comic arcs or the movies).

Much like in the movies, Wolverine (“Weapon X”) and Rogue are newcomers. There are some familiar faces from the very beginning –Iceman, Colossus, Jean Grey, Sabretooth (the latter with dubious loyalties), and other fan favourites are introduced over the course of the collection – Cyclops, Beast, Nightcrawler, Gambit, and more. But, just as Magneto’s allegiance is different, so too is that of some other established X-Men, who find themselves in entirely different situations. It makes for some interesting reading, and surprising character development.

This is the first of four volumes, collecting the entire story, which was published over a couple of decades as special one-offs, or short runs in between other storylines. It’s meant to collect the “Complete Saga”, but it still feels incomplete, and like there are some gaps in the overall story. Some of these gaps are filled in with exposition, but some of the ‘off-screen’ events seemed pretty major to have been left out. There are, therefore, some story and plot elements that don’t gel so well, and between each section there can be some considerable jumps forward in time.

The artwork changes over the course of the book – these were released over quite a number of years, so we get to see the development of Marvel’s house-style, from the classic comic art of Terry Dobson (who pencilled the first section), to the stylised art we find more often today (by, among others, Trevor McCarthy). This latter style is the one I’m most familiar with, having started reading X-Men in the 1990s: many of the male characters look like they suffer a little from gigantism, or as though they've been dosing themselves with too much gorilla growth hormone, with excessively-defined musculatures; while the women have impossibly shapely curves. It was nice to see the evidence of style-development, and all the artists who worked on this volume’s content did a very good job.

The story is somewhat episodic – partly the fault of the time-jumps involved – but there’s plenty of clear continuity and background provided when necessary. The special that focused on Blink was particularly interesting, as she goes through an adventure of her own, in yet another alternate reality. She’s a character I’m not familiar with, so it was nice that she got a dedicated side-story. Morph is sometimes a little annoying, but it seemed to depend on the author – sometimes he was a buffoon, sometimes he was amusing-but-competent. Sabretooth is surprisingly nuanced as a character, given his usual blunt-force-maniacal nature. Magneto can, at times, be a little too-angsty. Overall, though, the storylines were interesting, and kept me engaged throughout. The dialogue was realistic, and never came across as particularly simplistic or cliché (there were some “comic-isms” that were acceptably incorporated into the storyline to fill in gaps and explanation).

Overall, then, a solid start to a much larger story. I look forward to getting my hands on the second book. And I hope Wolverine features more in future volumes (he’s only in a couple of short segments of this book).

A thought on this compared to All Star Superman:

I am much more familiar with the X-Men universe, characters, and so forth, than I am with Superman’s extended setting (the movies and Smallville are about it), so I think this might account for my easier time getting to grips with the story. Which begs the question: where’s the best place to start with various comic series? This, an alternative reality story, is interesting but I think some of the allusion might be lost on newcomers (although, those familiar with the movies might recognise the references). My next graphic novel is All Star Superman author Grant Morrison’s New X-Men: Volume 1.