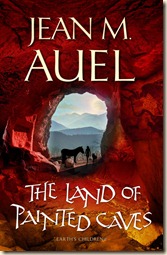 The Conclusion to the Earth’s Children Series

Europe is in the grip of the Ice Age. Its harsh but spectacularly beautiful terrain supports many varieties of animal but few people. They are Cro-Magnons – the first anatomically modern people – and Neanderthals, the other race with whom we shared that cold, ancient land.

THE STORY SO FAR: Ayla is a Cro-Magnon child who lost her parents in an earthquake and was adopted by a tribe of Neanderthal, the Clan. The Clan’s wary suspicion was gradually transformed into acceptance of this girl, so different from them, under the guidance of its medicine woman Iza and its wise holy man Creb. But Broud, the Clan’s future leader, becomes an implacable enemy, and causes her exile. Forced into dangerous isolation, she eventually finds her soul mate and fellow Cro-Magnon, Jondalar.

Their epic journey across Europe is complete and Ayla and Jondalar join his people in the region now known as south-west France.

Settling into the rhythm of life in the Ninth Cave, the couple find much pleasure in their baby daughter and in being reunited with friends and family. Ayla plays a vital role in the area of healing: her knowledge of plants and herbs, gleaned from her days with the Clan, strikes awe in her new tribe. They are also both impressed by and wary of her uncanny affinity with long-time companions, the mare Whinney and Wolf. But, torn between her desire to concentrate on her new child and the rigours of her training as a Zelandoni acolyte, Ayla finds her relationship with Jondalar moving into stormy waters. Can she manage to balance her sense of destiny with her heart?

Though Jean Auel has dedicated thirty years of her life to the Earth’s children series, this is only the sixth book since Clan of the Cave Bear was first published in 1980. The long waits between books is explained by her as research time, and it is absolutely clear that Auel’s meticulous attention to detail and research has paid off. Having studied palaeolithic archaeology and having excavated a cave dwelling myself, I can vouch for the sheer breadth of study Auel has undertaken: archaeological, sociological, zoological, anthropological, and art studies (I could go on) are all evident in her books. The Land of Painted Caves is the conclusion to the series and no less well researched for it. Ice Age France comes vividly to life with all the sounds, smells and flavours of Cro-Magnon existence leaping from the page.

Readers of the earlier books will already be familiar with the Ninth Cave, Ayla’s mate Jondalar’s home and tribe. As such, Auel has dedicated less of the story to exploration and description of the surroundings – though they are still richly detailed and explained where necessary – and the author has instead concentrated more on the characters and human interactions of Ayla, Jondalar and the people of the Zelandoni. The spiritual aspect of Ice Age man, hinted at and touched upon in the previous books, is explored in greater detail in this latest instalment, and the breakthroughs in astronomy (yes, astronomy, look it up if you don’t believe it), art and social behaviours that led Cro-Magnons to modern man are all examined in this novel.

As in the other books, Auel uses the vehicle of cultures clashing to make the reader think about our own attitudes and beliefs, and I certainly found her treatments thought-provoking and good enough for me to consider alternative perspectives on many issues. Some readers may, and do, find the feminist sociological slant too heavy-handed for their taste, but I’m fine with it. I like a book that makes me think and I don’t feel the need to agree with everything that is being said or written.

The story in The Land of The Painted Caves revolves around Ayla’s training to be a Zelandoni, a spiritual leader, and her turbulent relationship with Jondalar, the man who brought her to the Ninth Cave. Unusual in the series for not including very much travelling and exposure to other characters, and the Neanderthal are noticeably absent, in this book Auel has allowed Ayla to settle down and make friends, enemies and, ultimately, a home. Familiar characters from The Shelters of Stone make up the bulk of the cast, though the one who really takes pride of place alongside the main protagonists is of course the First Among the Zelandoni, Ayla’s mentor and friend. I can’t say much more without spoiling the plot, but there are some lovely surprises  and links to past books that help to wrap up the series in a slightly schmaltzy but welcome way. As with the rest of the series, the writing style is gentle, richly descriptive and deeply engrossing.

Of course, much of Auel’s world is conjecture, albeit well informed, and I don’t believe for a moment that the plot devices where almost all the major discoveries and inventions of the late palaeolithic were made within a single generation by a group of half a dozen people are meant to be taken seriously. Jean Auel is clearly in love with the Ice Age, and this is as much a love letter to the Cro-Magnons as it is a love story between Ayla and Jondalar. I had trouble putting it down at night, and my only regret is that there won’t be any more from this great saga of the Ice Age.

Posted by Civilian Reader at 11:14 AM