There are many ways a young man with quick wits and a quick sword can advance in the world. Vlad Taltos chose the route of the assassin. To his other qualifications he added two things: The first was a smattering of witchcraft – badly thought of on Dragaera, but only a fool refuses a weapon…

The second was his constant companion, a young jhereg, its leathery wings and poisonous teeth always at Vlad’s command, its alien mind psionically linked with his own.

A good number of authors and friends had recommended Steven Brust, many listing him as an inspiration and early fantasy-favourite. I had hoped to get this read for the 28th anniversary of its publication (first week of April), but other things pushed it out of the way. Nevertheless, having now read it, I am very grateful for the recommendation.

Jhereg is the first book Brust wrote starring assassin-hero Vlad Taltos and set in Dragaera, a pseudo-medieval world of noble houses and endless machinations and politicking – not to mention killers-for-hire that said politicking can sometimes require. It was first published about two weeks after I was born, which for some reason also made it rather appealing. I can’t say for definite that it influenced many of the authors writing in the sub-genre (single adventurer/thief/assassin protagonist fantasy), but you can certainly see some of the genre seeds being planted with Vlad’s adventures.

Vlad is an assassin and successful crime lord (of a sorts), who hires his services to anyone who can afford him. With the help of his merry band of other criminal acquaintances, he has managed to carve a considerable reputation and successful niche for himself in Dragaera’s underworld.

In Jhereg, Vlad is hired to take care of a wayward House Jhereg noble, Mellar, who has absconded with an awful lot of House funds. Vlad’s new employer, the noble known simply as ‘The Demon’, wants Mellar dealt with as an example that you can’t get away with ripping off the Jhereg lords. Mellar appears to have been plotting his theft for a very long time, and has taken refuge at the home of Vlad’s close friend, the ever-noble Morrolan – Lord of House Dragon. Given the history between the Jheregs and Dragons, Mellar’s devious plan coupled with the Demon’s impatience could be enough to rekindle a historic feud between the two houses, unless Vlad can find a way to complete the job while protecting Morrolan’s strict rules of noble etiquette – specifically, that a guest’s safety, health and life are inviolable while at his home.

Overall, there are seventeen Houses of the Dragaeran Empire, and the series is intended to have a book for each House (along with, apparently, an introduction and a conclusion), and so there should be nineteen novels by the end – the latest novel, Tiassa, is the 13th book (published this May). In each book, there’s a significant character linked to the plot belonging to the House indicated by the title. What I didn’t realise, when I first picked up Jhereg, was that Brust did not write them in chronological order. This was a little difficult for my OCD nature to accept for a few minutes, if I’m honest. (I don’t like starting series mid-way, which is part of the reason established, epic series are so daunting.) But, I quickly ignored the need to read Yendi (the second book in The Book of Jhereg omnibus, but first chronologically), and got stuck into Jhereg.

Put simply, this novel is great fun. It’s very different from much of contemporary fantasy work being published today, and is far less grim and gritty. That’s not to say it’s unserious and flippant (despite Vlad himself voicing many one-liners and sarcastic comments), but the tone is much lighter than many modern fantasists. Brust’s prose help a great deal – they are streamlined, quick and highly accessible, and much is left to the readers’ imagination.

The plot moves at a very brisk pace, and given the relative shortness of the novel, it’s reasonable to expect to burn your way through it at a fair clip. The characters are likeable – especially Vlad and his close group of companions. If I had one niggle, it would be that sometimes Brust gives Vlad too many sarcastic comments in too short a period (this, actually, I put down to Debut Novel Syndrome – it’s something Pratchett suffered from, as well). Jhereg throws us right into the world, and Brust does a good job of allowing the story to fill in our greater understanding and impression of the world he’s created and the characters that populate it. Sure, there are some passages that read like blatant exposition, and some pretty huge informational bombs are dropped on us, but Brust’s writing is good enough that we welcome and enjoy the explanation and background. Quite a few questions are left unanswered, too, which I imagine would have been particularly frustrating for fans who read the novels as they came out; the next novel, Yendi, takes us back in time to a younger Vlad’s adventures.

Some elements of the world are underdeveloped, while others are laid out in considerable detail. The balance isn’t perfect, but it does add incentive to read more. One could say the novel lacks a certain polish that is evident in many modern fantasies, but its rougher-around-the-edges nature is definitely part of its overall appeal.

If you’re after something a little lighter, I would recommend you check out Steven Brust’s Vlad Taltos series. It’s great fun, and offers plenty of twists on some classic fantasy tropes while also setting a few precedents of its own. 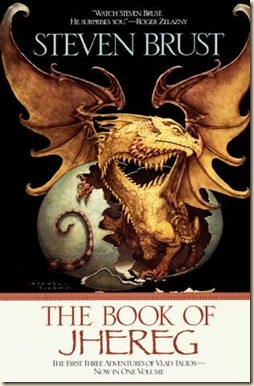