An Interview with Alan Campbell 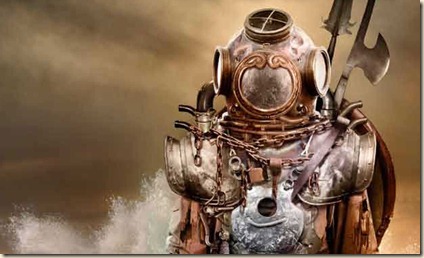 Alan Campbell’s latest novel, The Sea of Ghosts is easily one of the best novels I’ve read in a good number of years. It had everything – superb characters, great plotting, a vivid and interesting world, and of course exceptional writing. In order to find out a little more about Campbell’s books and writing, I contacted him with a handful of questions, and he was kind enough to answer them.

Your new novel, The Sea of Ghosts, has been very well received so far. How would you introduce the novel to new readers, and where do you see the series going from here?

The Sea of Ghosts is the start of a new series for me. It’s an adventure story set in a world of poisoned seas, entropic sorcery, drug-addicted dragons, telepaths, and minefields of dangerous artefacts. When former imperial munitions expert Thomas Granger is betrayed and robbed by a colleague, he sets out on a journey across the high seas to recover what was taken from him. The series as a whole was actually inspired by themes from classic vampire literature. While this will not be particularly obvious in the first book, it should become apparent as the story subsequently unfolds. The next volume starts where the first one left off. I would describe it as a romance in the original sense of the word. 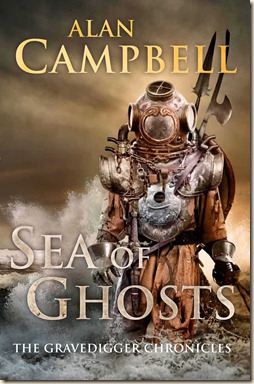 The Gravedigger Chronicles is your second fantasy series. For those who are new to the genre, how would you describe your first series, The Deepgate Codex? Did you approach the two series differently?

The Deepgate Codex was dark, claustrophobic and very violent. It’s the story of two angels: one who dreams of battle, but who is not allowed to fly, let alone leave the safety of the church; and one who abhors killing, but is forced to murder in order to survive. I wrote Scar Night as a standalone novel, but then found myself with the challenge of turning it into a trilogy. With The Gravedigger Chronicles, I had the wonderful luxury of being able to plan the series from the very start, so while Sea of Ghosts has a beginning, a middle and an end, it is also part of a much larger story.

From all around. There’s a scene in Sea of Ghosts where my protagonist is trapped in a three-sided corral abutting a harbour and forced to endure trial by combat. The Empire unleashes a ferocious hound. Many years ago in Spain I watched a similar scene play out, but in that case the corral was made from steel rather than dragon bone, and in place of the hound was a rather foul-tempered bull. This is what happened: 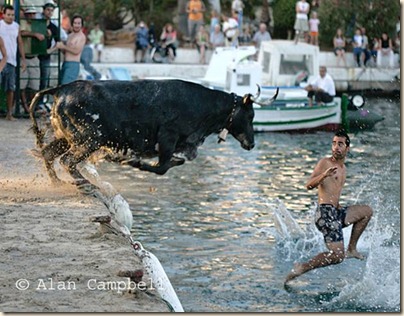 The sorcery in Sea of Ghosts is a cauldron brew of quantum physics, 18th and 19th Century science, a few of our stranger contemporary theories about the nature of the universe, and the work of Nikola Tesla.

Who would you say are your biggest influences and what first drew you to genre fiction?

Mervyn Peake’s Gormenghast was the book that made me want to first pick up a pen (it actually was a pen because I didn’t have a computer at the time). I loved the atmosphere Peake created, but also his humour and his playfulness with prose.

I’m drawn to fantasy because of the sheer wonder of it. I like to be startled and amazed, carried away to wonderful places to meet strange cultures. I have this theory that most writers and readers of fantasy are frustrated explorers, and that we lament the fact that so much of our world is discovered, threaded with roads and divided into little enclosed spaces which are inevitably owned by someone who doesn’t want you there. When even the hill tribes of the Amazon are wearing branded sneakers, you have to wonder what has been lost from the world. Fantasy offers me an escape from all that.

The Sea of Ghosts contains some interesting scientific content and concepts about space. What made you decide to include this in a fantasy novel, when usually you’d expect it in a sci-fi novel?

When I write, I’m asking the reader to accompany me to some very strange places indeed. I’m asking him to suspend his disbelief. It seems to me that the stranger the world, the more work is required to ground it and make it seem real. This is especially so for worlds that feature magic. I worry that I am I asking too much of my readers to simply accept that a knife allows the blind to see or that spectacles can gaze into the past. So if I happen to have a character who is a scientist, then I need him there on the ground, trying his damnedest to figure out how such artefacts work and why this cosmos works the way it does. He doesn’t necessarily have to succeed, but if he has an inquiring mind he certainly has to try.

I don’t see any reason to exclude science from fantasy. The characters who inhabit these fantastic realms will be interested in understanding their own environment. And that’s all science really is – whether its Neolithic peoples building stone circles, or the ancient Greeks studying geometry, or Newton pondering an apple – it’s all about unravelling magic. 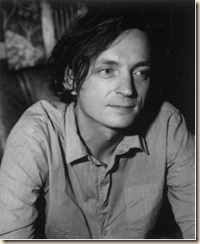 The Author ponders his next Novel

As a follow-up, what’s your opinion of the genre as a whole today? Do you think the labels of ‘fantasy’ and ‘sci-fi’ are too restrictive? (After all, authors like yourself and Mark Charan Newton are expanding fantasy with traditional sci-fi elements.)

People, especially publishers and booksellers, do like to pigeon-hole books so that readers who like one type of book know where to find similar ones. With the appearance of so many sub-genres (urban fantasy, epic fantasy, high fantasy, and so on), it can sometimes seem like a desperate and increasingly impossible task to categorise everything. But I don’t think many authors sit down to write with their chosen sub-genre firmly in mind. I suspect that most of us just write the sort of stories that we love to read, and leave it to others to decide how to categorise them. I do worry that some people have preconceived notions of a genre, and will therefore avoid reading stories they might enjoy if they just gave them a chance.

You used to work in the computer game industry. Do you miss it, or want to ever go back to it? Any favourite projects that you worked on? Any projects you wish you’d been able to work on?

I actually enjoyed programming. There’s much satisfaction to be had from creating something from – quite literally – nothing. You don’t need any raw materials, just hard work, some skill and imagination. Of course, that’s just like writing, which gives me the same sort of satisfaction. Would I go back to it? The money is better, certainly. But I’d miss the freedom writing gives me. I did enjoy working on the first GTA, and there are a few game projects of my own I’d still like to realise, if I ever find the time.

Something inspires me, and I’ll start to write. I soon get lost in the story, and the rest is a mix of hard work, joy, excitement, doubt and head-clenching fear. I have a solid idea of where I want the story to go, but the characters often take me there via routes I don’t expect. This was true in Sea of Ghosts. My protagonist, Granger, found himself in certain difficult situations simply because those situations seemed inevitable to me as a writer. I allowed him to go there, because I trusted him to be resourceful enough to get himself out of trouble. The problem was, as is often the case, that the character is more resourceful than the writer. What took Granger moments to figure out, took me weeks. It was the same with Maskelyne. Months of research went into a few short paragraphs that the reader doesn’t even need to understand. However, it was important to me that the character understands what he’s talking about.

I find myself researching more and more these days. It seems to me that you need to approach a fantasy novel with just as much attention to detail as you would employ in an historical novel. The fantasy world is invented, but it still has to feel real. 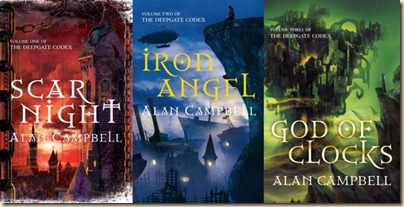 Going back to Gormenghast again. On every single page you can sense how much fun Peake is having. As soon as I recognised that, I knew that I wanted to write. My first story since leaving school was actually Scar Night. It took me seven drafts before I was happy with it, and I’ve been learning more ever since.

Going on holiday. Sad but true. I really need a break. 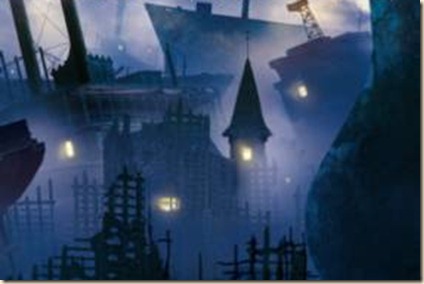