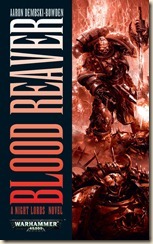 In Blood Reaver, we get the continuation of the story begun in Soul Hunter and Throne Of Lies – of a company of traitor Night Lords, as they struggle to survive and continue the Great War against the Imperium. Soul Hunter took me by surprise – it was a superb science fiction novel, populated by complex and interesting characters, with a solid and engaging premise. Blood Reaver takes things one step further and transcends its predecessor. This is, truly, a superb novel by anybody’s standards.

Deadly internal rivalries and ever-greater numbers of brother Astartes succumbing to the embrace of Chaos is slowly draining the meagre strength of the Company. The Night Lords are tearing themselves apart from within, and Talos – the peculiarly still proud and noble (in his way) leader of First Claw, prophet of the Legion – must help the Exalted (the twisted, mutated Company commander) rebuild their forces. To do so, they must re-arm and repair the damage wrought in their previous engagement, and that requires a trip to Hell’s Iris, a deep-space bastion of the renegade Red Corsairs.

There is a frustration that defines the Night Lords’ war against the Imperium. Those who retain their noble core are fed up of nipping at the heels of the Emperor’s forces, and wish to stop surviving and start winning the eternal war. But first, the Night Lords must rebuild, repair, and heal their still-fresh wounds. As the Exalted states,

“I wish to be proud once more. Proud of our war. Proud of my warriors. Proud to stand in midnight clad. We must rise again, greater than before, or be forgotten forever.”

Despite the novel’s synopsis, it took longer than expected for the Red Corsairs to appear. This was no bad thing, however, as Aaron appears to favour a slow-build approach to his novels, leading inexorably to a climactic and satisfying dénouement.

I am still amazed by the author’s ability to imbue even his ‘evil’ characters with a certain nobility. The Night Lords are, for all intents and purposes, superhuman terrorist thugs, but the author develops them, delving deeper and making them seem far more human than one might expect. The struggle of the Traitor Legion, not something one usually sees in Black Library fiction, is a superb angle for the novel, and Blood Reaver adds further layers to our understanding of the desperate circumstances that these brutal-yet-proud warriors must operate in.

The lives of the non-Astartes inhabitants of the Covenant of Blood are further explored, as Septimus and Octavia enjoy higher stations and respect (mixed with increased fear of Octavia, following an deadly accident) after the events of Soul Hunter and the conflict that ended the first novel in the series. It’s an interesting look at how humans evolve given difficult and dire circumstances, and how neglect from their Night Lord masters can impact the overall community and efficiency of the mortal crew. After the initial raid on a supply and manufacturing outpost, the new mortal slaves add dissent and tension among their ranks, which slowly start to affect the Traitor Astartes also.

The novel’s tone is mostly serious – touching on themes of betrayal, honour, vengeance, frustration, and also a twisted form of family and community – but Dembski-Bowden sprinkles in some levity through his characters. Navigator Octavia’s bizarre assistant, Hound, is an amusing, if also grotesque, compliant Gollum-like figure, who offers some light, amusing moments due to its cluelessness and puppy-like devotion to Octavia. Deltrian, the Covenant of Blood’s mech-priest is largely devoid of humanity, but his few and hesitant attempts to ‘fit in’ are also amusing.

As with Soul Hunter, the author has approached his subject with far more depth than anyone else dealing with the Traitor Legions in the ‘contemporary’ WH40k timeline (the Horus Heresy novels are different, as they focus on a much different time, when all Astartes began loyal to the Emperor). Greater attention is paid to making them a diverse group with characters with conflicting, loyalties, agendas, morals, and so forth.

There is a lingering sense of honour, a vestigial humanity that remains among some of the Traitor Legions. While many have devolved into killing machines or given in wholeheartedly to Chaos worship (complete with the mutations and abrasion of character and self that entails), most of First Claw shares Talos’s fervent desire to remain untainted (ironic, given his prophetic gift – which didn’t feature as much in this novel as it did in Soul Hunter). The juxtaposition between the original Traitor Legions and the renegade Chapters is well handled – the more recent traitors seem to accept Chaos far more readily, as evidenced by the Red Corsairs’ lair, populated by mutants and cultists of all stripes and shapes. Variel, the obsessive-compulsive Red Corsair apothecary who doesn't like to be touched, is a noble renegade, grown brutal because of his circumstances and environment, but retains a sense of formality, pride and dignity, resisting baser instincts and corruption.

Those familiar with the Warhammer 40,000 setting will, of course, get more from this novel (and series as a whole) than total newcomers. That being said, AD-B has written a novel that, while firmly grounded in 40k lore, transcends its strictures and is just an awesome science fiction novel, expanding the scope of what one might usually find in such fiction and developing it into so much more. This, actually, is something one is finding more and more in Black Library releases – the level of writing across the board has taken considerable leaps in quality, and it remains a real shame that the ‘stigma’ of tie-in fiction remains. Authors such as Aaron Dembski-Bowden, Graham McNeill and Dan Abnett in particular, but also a number of others, are producing ever-finer science fiction and fantasy.

Dembski-Bowden’s treatment of the Night Lords and their plight is tragic, noble, yet also utterly ferocious. Their purpose was to be the Emperor’s terror troops, sowing the seeds of fear and despair wherever they went, before setting worlds aflame. The author brilliantly and perfectly reflects this in his characters, but makes them far more three-dimensional and complex (even Uzas, the First Claw warrior who has accepted his bloodlust far more readily and enthusiastically than any other, has moments of clarity and philosophical lucidity).

Newcomers will read a military sci-fi novel of the utmost calibre, while long-time fans of the franchise will find in Blood Reaver one of the best novels Black Library have ever published. That the novel was written by a young author at the start of what will, hopefully, be a long and illustrious career, is something to be celebrated. I don’t think I’m exaggerating when I say Dembski-Bowden is a real, rare talent. His prose has that indefinable quality that just deserves to be read, it's insistently readable, if that makes sense. There is a touch of poeticism in his prose – not too florid, just enough to entrance the reader.

At the risk of appearing to succumb to hyperbole, this novel is, truly, essential reading. I can’t think of a single fault. (I didn’t even notice any typos.) Aaron Dembski-Bowden has become, without any shadow of doubt, Black Library’s best author, and one of my favourite authors overall.

Blood Reaver is excellent, and any fan of WH40k should love it, and fans of (military) sci-fi should certainly also enjoy the series. There really are no better words to describe this novel, other than it is exceptional. It works on every level – plot, pace, characterisation, dialogue, action (less than one might assume, given the subject), prose, structure.

Like a master-crafted blade, this novel is nearly perfectly balanced.