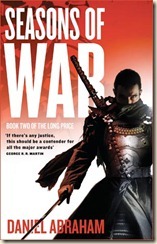 The poets and their magical andat have protected the cities of the Khaiem against their rivals in Galt for generations.  Otah Khai of the Winter City of Machi, has tried for years to prepare his people for a future in which the andat can no longer be safely harnessed, but his warnings have been ignored.  And now it's too late.

A ruthless, charismatic Galtic general believes he has found a way to strip the andat of their power.  If he is wrong, Galt will be destroyed.  If he is right, the Khaiem will fall.  Only one thing is certain: comflict is inevitable, and Otah and his old friend and enemy, the disgraced poet, Maati, must fight a desperate battle to protect their cities from slaughter.

These two men, bound together by shadow and betrayal, will bring the world to the edge of a cataclysm unlike anything either side had imagines.

For if the cost of war is high, the price of peace may be unimaginable...

The two novels that make up this second Long Price Quartet omnibus follow on from Shadow & Betrayal (which Stefan reviewed), and conclude the intertwined tales of Otah and Maati. Abraham brings their world to bright, bloody and compelling life, the very strangeness of the customs and culture somehow serving to make them that much more believable. A new culture and new civilisation is introduced, the Galts, and the politics and intrigue are deftly handled in a way that feels very natural and true to human nature. We are also introduced to the children of Otah, and their part in the conclusion to this magnificent series.

Without giving away too much of the plot, I can say that the story is at times maybe a little bit predictable, though the writing certainly doesn’t suffer for it. The world is well-defined and beautifully crafted, and the characters are a wonderful mix of noble qualities and talents, and very human faults and failings. Abraham succeeds where many authors fail in making it very difficult for the reader to take sides, and while one does find oneself having a favourite character, this is despite their sometimes unpleasant or even stupid behaviour. It is because of their flaws that the characters are easier to relate to.

Abraham treats magic with a delicate touch, defining its limitations and ensuring that it is a rarefied tool, keeping its use limited and not allowing it to become the answer to every problem the characters encounter. Magic feels more like a vehicle for us to examine the characters’ reactions and behaviour than a character in itself, and the story is more rounded and character-driven as a result.

If you enjoy considered and well crafted epics, read Shadow & Betrayal and then tuck into Seasons of War. You are in for a satisfying, intelligently written and original fantasy read.

[Stefan will write a longer review of this omnibus in the near future: He can’t help it – he loves Dan Abraham’s writing… First, however, he’ll write a review of Abraham’s latest, The Dragon’s Path, which should be ready very soon.] 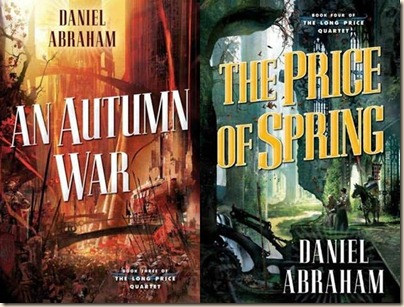