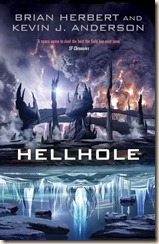 A new Sci-Fi series that shows potential, despite some flaws

Only the most desperate would ever dare to make a new home on Hellhole, a planet ravaged by natural disasters. The planet is a dumping ground for undesirables, misfits and charlatans. But its location out on the wild frontiers of the Constellation, among the Deep Zone worlds, makes it the final refuge for those fleeing from the rule of tyrant, Diadem Michella Duchenet.

General Adolphus, the military leader of a failed rebellion, is exiled to Hellhole, which he is determined to transform into a place of opportunity. While colonists work to develop the planet, the General forges secret alliances with leaders of the other Deep Zone worlds. He dreams of turning his prison into the centre of a new coalition of planets free from the Diadem’s iron grip.

On the decadent capital planet, Sonjeera, surrounded by corruption and consumed by the plots and feuds of the old guard nobles, Diadem Michella is confident that the General has been neutralized.

The planet Hellhole, though damaged and volatile, hides secrets of historic magnitude. Lurking beneath the surface are the remnants of an obliterated alien civilization, detailing an unrecorded past, which, if unearthed, could tear the fragile human civilization apart.

I had high hopes for this novel, co-authored as it is by Kevin J Anderson, an author whose novels have thus far never failed to entertain. With Hellhole, however, I was left a little less entertained and gripped than usual. It’s a solid premise, imaginatively drawn, but the execution is a little inconsistent, and there are too many voices for a first volume.

The novel kicks off with a prologue, set at the end of the rebellion mentioned in the synopsis. We see how it was that the rebels came all the way to Sonjeera before being beaten by the devious Duchenet. Adolphus’s character and virtue are laid on a bit too thickly, which actually made me dislike him a little (the job could have been done with a little more subtlety and nuance). What surprised me, however, is that the novel then jumps seven years in time. I had expected a little bit more story about the initial landing and struggles on Hellhole, as the exiled general and his comrades and companions acclimate to the harsh environment and learn to deal with the inhospitable environment. When we re-join the story, things are relatively settled, and the general has turned Hellhole into quite a successful – albeit still struggling – Deep Zone colony, drawing its fair share of willing immigrants as well as convicted criminals and political exiles.

What we see of Adolphus’s support for modernising and civilising Hellhole has some echoes of an enduring mythos in American history – that of the Frontier: the idealised impression of the Western expansion and the hard-scrabble lives of those who made the journey is evoked in the colonists attempts to transform Hellhole into a thriving colony. There was potential to develop the story further, I think, if the authors had given us just a few chapters on the early struggles of the Hellhole population – it might also have helped the reader appreciate their predicament more.

Hellhole is just as much about galactic politics as it is about the travails of the Hellhole (real name “Hallholme”) population – actually, it’s perhaps more about the Constellation’s politics than it is about Hellhole. The wealthy elite of society enjoy near-total power and a phenomenal amount of pull, which allows them to pursue petty jealousies and vendettas to extremes; and they have no objection to meting out excessive punishments for minor infractions. For the purposes of this novel, that means getting people shipped off to Hallholme/Hellhole. This is shown a number of times in the backstories of key characters currently eking out an existence on the new colony. The politics is Machiavelli run amok, as multiple noble families see nefarious motives behind every simple move, every statement (grand or insignificant) by those others who form part of the Council of Lords. All the while, the emotional and petty Diadem must juggle not only the shifting loyalties and agendas of her subjects, but also the unruly and embarrassing affair her daughter is conducting, not to mention the political fallout that it creates.

The universe the authors have created is interesting, and certainly has considerable scope and potential to be near-endlessly expanded upon, and revisited in future novels. There are some interesting twists on popular sci-fi and fantasy tropes, which make the novel stand out – for example, they offer an interesting, twisted take on the ‘humble boy discovers his noble heritage’ story, as a member of a centuries-ago disgraced noble family discovers his lineage and sets about executing a rather diabolical plan to recover his position among the elite, while meting out revenge on those families who caused the downfall of his own.

There are quite a lot of characters in the novel, perhaps too many. With this number of perspectives, and the authors’ desire to give them equal space in the novel, we are forced to jump around a lot. Perspectives change pretty much every chapter (which can sometimes be as short as three pages), which means you can’t really develop much of an attachment to or connection with any of them. This is the novel's greatest weakness, and it’s difficult to select examples of any who particularly stand-out. The same can be said for the worlds – they are wonderfully described, but we get so many descriptions, so quickly, they become a blur. I was also a little disappointed that we don’t spend much time on Hellhole itself. Some explanation of how the new colonists and exiles managed the incredible feat of making Hellhole moderately hospitable and developed is revealed as the novel progresses, and shows how the General can work towards his ultimate agenda.

The novel is quickly-paced, populated by interesting if under-developed characters, and the events on Hellhole and around the Constellation suggest much bigger events still to come. The first half of the novel sets things up, and then the second offers up some surprises as we start to learn more about the original population of Hellhole. The novel slowly builds to an end that sets things up nicely for the next novel, which does suggest future books may be more action-packed and exciting. In Hellhole, we get a very broad impression of this universe, complete with a vicious and scheming aristocracy, smugglers, a brewing insurrection, and a mysterious alien race with a bizarre request for help.

A cautious recommendation, therefore, with particular emphasis on the fact that this is the first book of potentially many, and so there’s a lot of world-/universe-building going on, which sadly makes the characters development suffer a touch. I’ll read future volumes, but I might not be so excited by book two as I am about the next Terra Incognita novel (out in June in the UK).

Posted by Civilian Reader at 10:33 AM