An Interview with Nathan Long 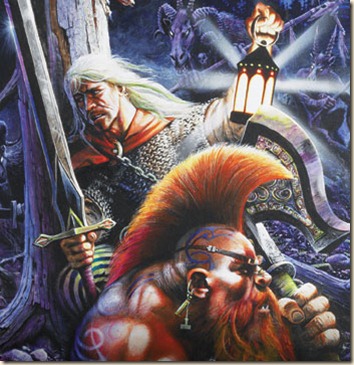 The Gotrek & Felix series has long been one of Black Library’s most popular (indeed, it’s the longest running), and is certainly one of my favourite fantasy series, having read it since the short stories appeared in the early Warhammer anthologies – Wolf Riders (1989), Ignorant Armies (1989), and Red Thirst (1990). Created by William King, the characters were taken over (and expanded) by Nathan Long, who has now written five increasingly-strong additions to the series. With his next novel, Bloodforged being published in June, featuring Ulrika the vampire (one-time flame of Felix), Nathan was kind enough to answer a few questions about the series, writing, and working in the Warhammer shared universe.

Your second Ulrika novel, Bloodforged, will be published this June. What can we expect from this novel?

Before I get started, I’d like to thank Stefan and Civilian Reader for the opportunity to do this interview. I read CR’s reviews all the time, and the site has always given my books – and tie-in books in general – a fair shake, and I appreciate that. For those of us who write tie-ins, quality reviews are few and far between. A lot of reviewers don’t count our books as “real fiction,” whatever that means, and so ignore us. Finding a place like this that reviews without prejudice is therefore a great blessing. Cheers, Stefan! Keep up the good work! 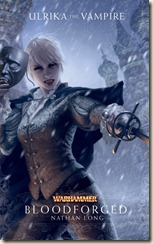 Okay, now what was the question again? Ah, yes. What can you expect from Bloodforged.

Well, I broadened Ulrika’s horizons a bit in this one. Bloodborn took place almost entirely in Nuln. In Bloodforged, she gets out and sees the world, traveling across the Empire and Kislev to Praag. Also, though the plot is mostly about Ulrika fighting Chaos cultists, the theme concerns her trying to figure out what to do with the rest of her eternal life, and how she deals with the conflict between her morality and her nature.

How did you find taking this character from the Gotrek & Felix series and letting her strike out on her own (as it were)?

I’ve really enjoyed it. Bill King created a great character in Ulrika, and set up a fantastic conflict for her: “What does a hero do when she becomes a monster?” I just took that question and ran with it.

I have done my best to craft stories that force Ulrika to face that question on every page. Sometimes she doesn’t get it right. Sometimes her best intentions ruin everything. It’s exciting to me to discover how she’s going to deal with the next conflict and what her ultimate decision will be. Hopefully the readers will think so too.

You took over writing the Gotrek & Felix series from its creator, William King. The three latest installments in the series have gone deeper than some previous volumes, and I think it would be safe to say that you’ve definitely made the series your own. What was it like, taking on these characters, and have you been pleased with the fan reaction?

It was terrifying, but fun as well. Gotrek and Felix are great characters, with well-defined personalities and quirks, so I had a blast writing them and coming up with scenarios that would highlight those quirks. At the same time, the pressure to get it right and live up to the reputation of the original novels was very stressful, and there were a fair few fans who were not pleased to see me take over the series. Nor did I always get it right.

Since those first steps, however, I hope I’ve found my footing, and a lot of people seem to like what I’m doing with the books and the characters these days. That is very gratifying.

Where do you see Gotrek and Felix going next?

Well, I’m still discussing that with my editors at the moment. I think I made it pretty clear at the end of Zombieslayer where they will be heading next, but what they meet along the way? That hasn’t been decided yet. Check back with me this time next year. [I think I might hold you to that… – CR]

Yikes. That’s a broad question. I pull inspiration from everywhere – from old books, from TV and movies, from current events, from friends. I don’t usually base my characters on any one specific person, but you will see reflections of recent political turmoil, gags from old kung-fu movies, locations from fantasy paintings, props from books on life in the middle ages, etc. It really does come from everywhere, then I strain it through the sieve that is my brain and it dribbles on the page.

What drew you to fantasy in the first place?

I’ve always loved it, but I think the start was my mom reading the Narnia books to my brother and me when we were kids. She read the whole series to us while we sat beside her on the couch in pajamas, looking at the pictures.

After that I sought out every book I could find with a knight or a dragon or a wizard on the cover. I read the Lord of the Rings when I was twelve, and after that started digging through the Conan stories and the Fafhrd and Grey Mouser books. I’ve been hooked ever since. 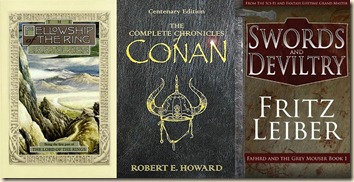 What’s it like writing within the established Warhammer setting? Do you have much freedom to adapt the world as you like, or are you sometimes reigned in?

The Warhammer world is pretty much set, and I have to abide by the rules, but I actually like that. One of the biggest chores a fantasy author faces is world building. The great thing about writing Warhammer fiction is that I don’t have to do any of that. I can just open an army book and look it up! And if it’s something truly obscure, I can ask my editors and they’ll find out.

I am allowed to invent a little town here and there if I need one, or a duke or a count, but mostly all that stuff has been done for me, and rather than finding it limiting, I find it comforting, and I enjoy fitting my stories into the existing world. It’s like doing a jigsaw puzzle – very satisfying once you’ve made the last piece fit.

The Ulrika series focuses on the undead and, by extension, necromancy, which also featured in recent Gotrek & Felix novels. What do you think of the increase in popularity of supernatural/undead fiction today? Any particular stand-out authors or titles, and what about them do you admire?

I’m afraid you’re not going to get a very good answer out of me on this. I haven’t read any of the recent zombie or vampire stuff, so I don’t have an opinion on it, and I’ve only seen a few of the movies/TV shows. I really enjoyed Let the Right One In, which was a Swedish vampire movie that came out a couple years back, and I liked what I saw of Walking Dead, the American zombie TV show, but other than that, I’m afraid I’ve been a bit lax in doing my undead homework.

Some of that has been deliberate, however. I have actually been afraid to read any of that stuff while writing Ulrika, for fear of being too heavily influenced or, on the other hand, second-guessing myself and trying too hard not to do what has been done before. Instead, I’ve stayed away from it all together.

What’s your opinion about the fantasy genre and community today?

This will be another unsatisfactory answer, I’m afraid. I don’t really read all that much of it. When I read, I tend to read older books – fantasy novels from the ’60s and ’70s – and even older adventure novels – swashbucklers from the ’20s, historical fiction, etc.

The last contemporary fantasy novels I’ve read were The Blade Itself by Joe Abercrombie, which I half-liked, and the two Locke Lamora books [The Lies of Locke Lamora and Red Seas Under Red Skies, by Scott Lynch], the first which I loved, and the second which I liked. That’s it, however. I don’t read as much as I should. Strangely, that seems to be the curse of being a full time writer. When you’re done writing for the day, you often just want to watch something, not read something. 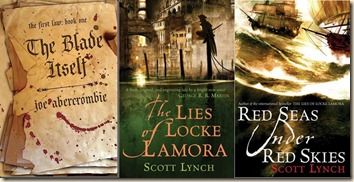 From the time I first started reading kids books, I thought about writing them. For a while I had other ideas. In high school I wanted to be an actor or a rock singer, but I came back to writing in college and decided to be a screen writer.

As to the second part of the question, I’m not sure how to answer. Do you mean the first story I completed? My first paid writing? My first attempt to make it a career?

I guess the short answer is, I look back on all of them fondly. I wrote my first complete fantasy story when I was twelve or so. It was terrible, but I was proud anyway because it was finished. It was something I could show people. It wasn’t just some half-done scribbles in the back of a school notebook, which is what I had been doing up to then. It was even typed!

My first paid writing was a story in Marion Zimmer Bradley’s Fantasy Magazine. It was my first interaction with an editor, and that was thrilling. To get feedback from a professional, and to be treated like a professional? Amazing. The fifty bucks was just a bonus.

My first attempt to make a career out of writing was when I moved to Hollywood to be a screenwriter. I have to say, that was as painful as it was thrilling, and there were a lot of lean and directionless years, but I don’t regret it. Screenwriting taught me structure and pacing, and how to reveal character through action, and those skills have stood me in good stead now that I’ve made the transition to novel writing.

I just this week got started on a new novel for Black Library. They haven’t announced it yet, so I can’t say what it is, but I will tell you that it’s in the Warhammer Heroes line, and it isn’t about an Empire hero.

Last month I turned in the final draft of the third Ulrika book, Bloodsworn (which should be out in June of 2012) and I’m really pleased with it. I think it’s a good conclusion to the series – as well as a good set up for another.

I am also getting ready to work on the Gotrek & Felix anthology that Christian Dunn announced at BL Live. I’ll be writing a story for it, and helping to choose and edit the other entries.

Besides Black Library stuff, I have a lot of personal projects I’m having fun with. I’m working on a comic book with a friend, writing a few screenplays, and I’m still trying to find some time to get started on an original (non-Warhammer) novel as well. Yeah, well, someday...

I am reading a swashbuckling tale of pirates and desert islands entitled Black Bartlemy’s Treasure by Jeffery Farnol. It was written in 1920. 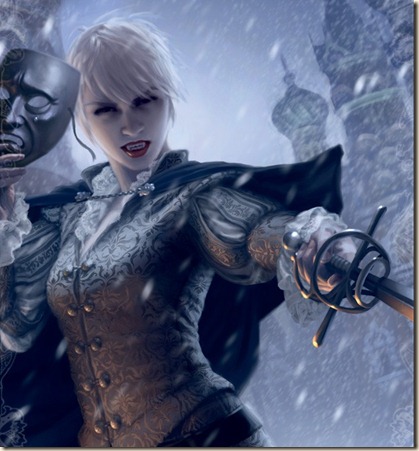 Posted by Civilian Reader at 8:40 AM