An Interview with David Chandler/Wellington

A little while back, I noticed on Voyager’s release schedule a mention of Den of Thieves by David Chandler. There wasn’t any more information available, so naturally I went hunting about on the internet, but was still not able to dig up much information. Some weeks have passed, and it was revealed that ‘David Chandler’ is the fantasy-writing alter-ego of horror author David Wellington – and not a world-renowned chemist, as Google would have me believe.

So, I contacted David himself through his website, to see if he might be able to shed some light on his upcoming fantasy series and his newly-published-in-the-UK vampire series. Thankfully, he was kind enough to fill me in on some details…

Your Ancient Blades trilogy is going to be released in the second half of this year, but there’s surprisingly little information available about it on the interwebs. How would you describe your series to prospective readers, the world in which it is set?

This is hardcore, classic, epic fantasy of the kind I loved as a kid.  It’s got dwarves. It’s got plenty of magic. And it’s got action on almost every page – there are sword fights, and monsters, and a love story, and most of all, a great plot and likable characters. It’s gritty without being grim – realistic but with a sense of fun. There’s some humor in there, and some grand adventure. It takes place in a medieval city run by a secret organization of thieves, where the noble knights are there to be made fun of... at least until you need somebody to kill a demon. Then the guy with the plate armor is your best friend. Which doesn’t mean you won’t pick his pocket while he’s distracted. 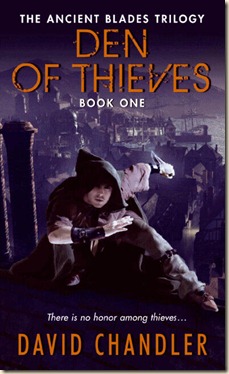 US Artwork for Den of Thieves

It’s the story of Malden, a master thief, who ends up holding a magic sword he doesn’t want and doesn’t know how to use. Too bad for him the sword has a destiny to fulfil, and he’s going along for the ride whether he wants to or not. It’s also about Sir Croy, a knight of the realm with a code of honor that shines brighter than his armor. He thinks people are generally good and trustworthy, and they just need someone to believe in them. The thieves of the Free City of Ness love guys like that. The third major character is Cythera, who is the daughter of a witch and a sorcerer and who is covered head to toe in mystical tattoos. She just wants to live her own life – which is a problem when both Malden and Croy fall in love with her at the same time.

It’s a hell of a story and I can’t wait to hear what people think of it.

You’re well known for your horror fiction, and 13 Bullets will be published in the UK in April (through Piatkus). This is the first novel in your Laura Caxton Vampire series. How would you introduce the series to a new reader?

The UK has seen my zombie novels previously, and anyone who liked those books should definitely pick up 13 Bullets. It’s the story of Laura Caxton, a young cop from Pennsylvania who runs across a vampire one night at a routine drunk driver stop. The problem there is that vampires are supposed to be extinct. The guy who killed the last one (supposedly) in 1983 shows up and starts teaching her how to kill vampires. Lesson one: vampires don’t want to date you. They don’t want to read you poetry and watch you drink red wine. No, they would rather rip your head off and drink blood out of your spurting neck. These are violent, nasty, grotesque vampires, the kind we were all afraid of as kids. Like all my books, 13 Bullets is about non-stop action and exciting characters. 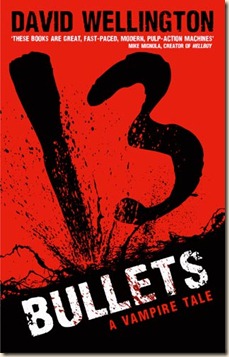 What made you decide to pen a fantasy series?  What drew you to the fantasy genre in the first place, and who and what would you say are the biggest influences on your work? Same question for horror?

I always planned on writing a fantasy novel. I never really planned on publishing one. I’ve loved fantasy since I was a kid but my writing career got started with a horror novel, and it can be hard to switch gears after a while. I wrote Den of Thieves, my first fantasy novel, for my own entertainment, frankly. Or, rather, my own therapy. I’d just gone through a bad divorce and needed something to keep my mind off of things. It was the perfect escape. I planned on sticking it in the back of my hard drive somewhere and just forgetting about it – but a friend of mind read it and immediately told me I had to show it to my agent. My agent demanded I publish it. The publisher demanded I write more of them. We’ll see what the readers demand!

My influences in every genre are the great pulp writers of the first half of the 20th Century: Clark Ashton Smith, Fritz Leiber, Robert E. Howard, Lovecraft to a lesser extent. These were writers who didn’t draw a big distinction between the various genres – they could write fantasy, horror, science fiction, mysteries, wherever the stories took them. I’ve always tried to follow that same dictum. More contemporary influences would be Terry Pratchett and Ian M. Banks.

What’s your opinion of the speculative genres you’re involved in today?

I love ’em. I love every genre, and always have. There are some great writers in fantasy right now, like Scott Lynch and Joe Abercrombie and George R.R. Martin, all of them doing very different things. That’s what I like about genre today, every writer gets to do his or her own thing, and the readers decide what they like – not the self-appointed gatekeepers anymore. I credit the internet with that.

Do you have any specific working, writing, researching practices, or authorial habits?

I write every day. I do about six months worth of research for most books, long before I even think about writing a single sentence. I don’t listen to music while I’m writing or anything like that – I get why some people do that, but I need to concentrate. Luckily I’ve learned to be able to do that just about anywhere: I write on airplanes, in hotel rooms, anywhere I can take my laptop.

I was six years old when I decided I was a writer, and I haven’t looked back since. It took me thirty years to publish my first book, but I never doubted it was going to happen. My first work was absolutely terrible, and should never be mentioned again. Writing isn’t something you can just pick up and run with – it takes endless work and practice. Unless you’re Robert Heinlein, supposedly – he sold the first thing he ever wrote. For those of us less blessed by destiny, it’s a long, frustrating process, but if you have it in you, you can’t not do it. If I don’t write I am plagued by disturbing dreams. That’s how I know I have to start a new project. 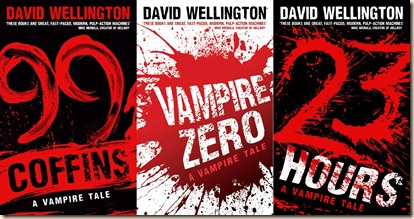 What projects do you have in the pipeline? Will you continue to publish both horror and fantasy?

I have the three fantasy novels coming out this year, and early in 2012 (in the US). I’m publishing my fifth vampire novel. I have so many more stories to tell, in fantasy, in horror, in other genres – as long as there are readers out there I’ll keep publishing.

Right now, taking a break! I’ve been working on my fantasy books for two years (I started thinking about the books five years ago, but only started typing in 2009) and I need to rest for a while. At least a day or two, before I start writing another book.

Thank you to David for taking the time to answer our questions! If you would like to learn more about David’s books, head on over to his website for news, information, and also some free online content.

Voyager will publish one volume of the Ancient Blades Trilogy in July, August and September 2011.

Posted by Civilian Reader at 10:15 AM