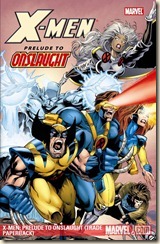 The prologue to the saga that literally remade the Marvel Universe of the 1990s.

Onslaught unnerved the X-Men and their enemies even before he entered the game, leading killer mutants and mutant killers alike to start the fight for survival early. Already edgy from the Age of Apocalypse, good, evil, and neutral wage war as the nemesis of the Nineties rears his telepathic head. Guest-starring Cable, Domino, and Nate Grey the X-Man.

As I’ve mentioned previously on the blog, I started reading X-Men and other Marvel comics during the Operation: Zero Tolerance ‘event’ (as Marvel terms the story arcs that can span their entire catalogue). The Onslaught Saga is the event that took place immediately before Zero Tolerance, and directly after the Age of Apocalypse (which I have also recently started). While spotty, this volume suggests it will be an interesting read.

This book offered a more traditional take on the X-Men, in that we’re set in the ‘proper’ Marvel universe, rather than some alternate-dimension where mutants hold dominion of the world, we are (re-)introduced to a host of familiar faces as they come to terms with a shadowy evil presence who has started to set into motion a diabolical plan on a global scale.

By its very nature, this is a rather choppy affair to begin with, as we are taken right to the start of the Onslaught saga – indeed, far before anything really happens – the conflict between Magneto and Professor X, when Xavier brutally retaliates to Magneto’s attack on Wolverine (which removed the adamantium from his bones). Over the course of the next chapters, based on the comic book issues, we start to see how Onslaught appeared in the Marvel universe (although, not in quite as much detail as I would have liked), but it’s clear that these stories were mere foreshadowing for the big event, which kicks off in the next chronological book (simply titled, The Complete Onslaught Saga, Book 1).

I’ve read that this book isn’t essential to understand or follow fully the four big collections that make up the Onslaught Saga, but it was nice to see how far back the writers and producers were planting the seeds of the larger event.

The artwork throughout is pretty nice, with only a couple of panels or pages that were a little rougher-around-the-edges. There are also plenty of nice touches, where the artists have had a bit of fun with the scenes they’ve drawn (such as, in one panel, Beast’s gripping the ceiling, but as it’s at the edge of the panel, the artist has made it look like he’s clutching the page itself – it’s a small touch, but I rather liked it). The artwork is also more of what I remembered from reading Zero Tolerance all those years ago – the slightly exaggerated, perhaps Manga-influenced art, stylised and recognisably Marvel.

This was meant as just a quick review, so I won’t delve too much more into the story as, I think, it probably would be fine to skip this before reading the rest of the Onslaught Saga. Completists, however, will like the added value of seeing the foreshadowing and groundwork that was laid for the overall, climactic Event.

Posted by Civilian Reader at 10:11 AM