Capsule Review: “One of Our Thursdays is Missing” by Jasper Fforde (Hodder) 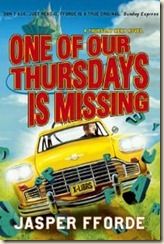 The Sixth Thursday Next Adventure

It is a time of unrest in the BookWorld. Only the diplomatic skills of ace literary detective Thursday Next can avert a devastating genre war. But a week before the peace talks, Thursday vanishes. Has she simply returned home to the RealWorld or is this something more sinister? All is not yet lost.

Living at the quiet end of speculative fiction is the written Thursday Next, eager to prove herself worthy of her illustrious namesake. The fictional Thursday is soon hot on the trail of her factual alter-ego, and quickly stumbles upon a plot so fiendish that it threatens the very BookWorld itself.

In Jasper Fforde’s latest Thursday Next novel, we get some glimpses of his prodigious imagination and inventiveness. Unfortunately, however, the novel doesn’t quite stack up with the rest of the series.

Jasper Fforde’s first novel featuring Thursday Next, The Eyre Affair, was excellent: it was witty, inventive and completely original. However, this, the sixth in the Thursday Next series, is not his best. With the real Thursday missing, fictional Thursday offers a similar yet different take on her character, which quite I liked.

The mystery of the novel is intriguing, and there are frequent examples of Fforde’s usual, witty form – for example, Sprocket, the mechanical butler, and the dodo who plays Pickwick, Thursday’s real dodo, were both funny and surprising, and the intricacies of BookWorld are always fascinating. Despite this, the novel just wasn’t as gripping as others in the series. It felt a little bit like the novel was almost self-consciously checking itself, in an attempt to make sure the reader knew how clever it all is. This had the unfortunate side-effect that the novel just wasn’t as absorbing as previous books, which had such well-done and fast-paced plots that you could get caught up in them. In this sixth novel, this just didn’t happen for me.

Fforde necessarily treads a fine line, and in this case I felt the book overbalanced into its own cleverness at times. One of Our Thursdays is Missing is worth a read if you’re a faithful Thursday follower, but I don’t think this is a standout success.

Posted by Civilian Reader at 10:27 PM

Email ThisBlogThis!Share to TwitterShare to FacebookShare to Pinterest
Labels: Fantasy, Hodder, Hodder and Stoughton, Jasper Fforde, One of Our Thursdays is Missing, Review, Thursday Next