“The Winds of Khalakovo” by Brad Beaulieu (Night Shade Books) 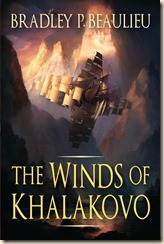 An unusual, intriguing and original start to a new fantasy series

Among inhospitable and unforgiving seas stands Khalakovo, a mountainous archipelago of seven islands, it’s prominent eyrie stretching a thousand feet into the sky.

Serviced by windships bearing goods and dignitaries, Khalakovo’s eyrie stands at the crossroads of world trade. But all is not well in Khalakovo. Conflict has erupted between the ruling Landed, the indigenous Aramahn, and the fanatical Maharraht, and a wasting disease has grown rampant over the past decade. Now, Khalakovo is to play host to the Nine Dukes, a meeting which will weigh heavily upon Khalakovo’s future.

When an elemental spirit attacks an incoming warship, murdering the Grand Duke and his retinue, Prince Nikandr, heir to the scepter of Khalakovo, is tasked with finding the child prodigy believed to be behind the summoning. However, Nikandr discovers that the boy is an autistic savant who may hold the key to lifting the blight that has been sweeping the islands. Can the Dukes, thirsty for revenge, be held at bay? Can Khalakovo be saved? The elusive answer drifts upon the Winds of Khalakovo…

In this highly imaginative and original fantasy, debut novelist Bradley Beaulieu has created something special. The author’s imagination is impressive, and the world he has created – not to mention the characters and politics that comprise it – intriguing and engaging. I really enjoyed this.

The Winds of Khalakovo opens with Nikandr visiting his mistress, Rehada (who has her own, hidden agenda), not long before he is to meet his betrothed – Atiana, a member of another Ducal family. It is through Nikandr’s eyes that we are introduced to much of this world, and his perspective dominates much of the first half of the novel. He is a sincere noble, comfortable in his position, but equally concerned about finding a cure for the blight that is effecting his and neighbouring lands.

The novel proceeds with quite a casual pace for the first half of the novel, as we are introduced to the world, the people who inhabit it, the Machiavellian politics of the nobility, and also the fierce resentments of the Maharraht (who seem to be a mixture of Romani Gypsies, Bedouins, and also fanatical insurgents). There are times I felt myself wishing the pace would pick up, as it sometimes dipped. Beaulieu has, however, spaced out key and momentous events almost perfectly throughout the novel – each time we think we know what’s about to happen, he surprises us with something new. It’s a great skill, and one can’t help wonder just how good his plotting will be as his experience and writing progresses.

The Ducal families of this world are incredibly self-conscious of their power and position. It is an aristocracy in which secrets are next to impossible to keep, and the matriarchs of the families (“Matri”) scheme behind the scenes to tug on the strings of fate and create connections that best suit their agendas. The Matri, in fact, are able to use an interesting type of magic, “taking the dark”, which allows them to move about the world as part of the aether, to commune with others leagues removed from them, and also to assume familiars (rooks are the most favoured, as assuming humans is forbidden), in the manner of Pratchett’s witches’ ‘borrowing’ of animals, only with much more control. The matriarchal magic system often put me in mind of some of the Stygian Norse magicks (best evoked in MD Lachlan’s Wolfsangel), but I couldn’t say what else might have influenced it. Whatever its influences, I think it’s a pretty cool, non-flashy magic system that felt entirely appropriate to the character of the Ducal families and their politics.

The magic of the Aramahn and Maharraht is one based on the control and manipulation of elemental spirits (earth, fire, water, and air especially – to control the windships), and is far more ‘flashy’ and obvious than the Matri’s. There appear to be various levels of spirits, and they form a crucial part of the story, as Nikandr, Atiana, Rehada and others attempt to get to the truth of the boy, Nasim’s nature and powers. The final set-piece of the novel is a climactic, elemental tour-de-force, as events and plots come to a head, and we see some pretty awesome displays of magic. These two magic systems are nicely juxtaposed in the novel, and it’s interesting to see how dependent the Ducal aristocracies have become on the Aramahn, who help guide their windships by manipulating the weather and winds.

The Grand Duke’s murder makes Nikandr’s investigation infinitely more difficult, as the rivalries between the Ducal families boil over and open hostilities ensue; former friends are pitched against each other, all while Nikandr’s genuine attempts to get to the bottom of the murder face roadblocks and scepticism from those who need answers the most. Ultimately, as the Vostromans (Atiana’s family) turn their suspicions into wrath, they come to war against Khalakovo, and Nikandr finds himself on opposite side to his former best friend, and brother to his betrothed (who finds her own allegiances confused). As the women of the families try to find a diplomatic solution to the tense political situation, Atiana is resigned to conflict: “When has reason ever stood in the way of politics?” The background politics and conflict offers a nice backdrop to Nikandr’s investigation, and is certainly interesting. Noticeably, however, for a novel that is very detailed, I thought not enough attention was given to the overall Ducal power politics. (Perhaps this will be a focus of forthcoming novels.)

One of Beaulieu’s strengths is that his characters are fully formed and realised on the pages: their relationships and interactions feel entirely natural, and I don’t think I found a single snippet of dialogue or description cliché or tired. It is sometimes difficult to decide who to root for, as those claiming to speak for each group allow petty jealousies and narrow agendas to dictate their actions, corrupting their cause. Loyalties and allegiances shift with events, and it’s next-to-impossible to predict the fates of any given character, as the author has crammed in so much information and so many events that keep the story moving. As a whole, Beaulieu is a very gifted and assured writer, far beyond what you might expect from a debut novelist. The world he has created is fascinating, fully-formed, and complex. The Winds of Khalakovo only gives us part of the whole picture, and I can’t wait for the next instalment of the series (The Straits of Galahesh), which will hopefully grant us a more full overall picture and understanding of the world, its magic and politics.

Put simply, this is a great, intelligent novel, set in a fully-realised and complex world. The pace may put off some readers who prefer their novels more brisk, but I think the pay-off justifies the steadier pace, which ramps up as we get closer to the dénouement, which pulls things together wonderfully. Highly original and engaging, The Winds of Khalakovo is one of the best debuts of this year, which also shows room for growth and expansion.

Brad recently wrote a post for Mad Hatter’s Review, in which he discusses the Cultural Influences of his world and novels. Head on over and read it; it’s really interesting, and fills out some more of his world.