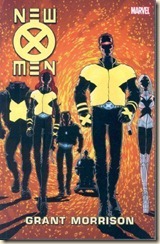 A gripping X-Men reboot (of sorts)

Sixteen million mutants dead – and that was just the beginning. A sinister force has embarked upon a mission of revenge and hatred, targeting Earth’s mutant population. Everyone and everything is expendable, as it works towards its ultimate revenge.

In this, the second X-Men omnibus of my re-introduction to comics, Grant Morrison (All Star Superman, We3) has penned a bold forced-reboot of the X-Men world. And it’s really very good.

If you caught my review of All Star Superman, you will have read how I was rather underwhelmed by Morrison’s script for that fan-favourite superhero. I bought New X-Men at the same time as the other, so I was rather anxious about starting this – X-Men titles were my preferred comic reading when I was younger, so I was concerned I may not like this, either. My fears, as it turned out, were unfounded.

Morrison has penned an interesting, multi-layered X-Men adventure. The team has been pared back – the main returning cast are Cyclops, Beast, Phoenix, Wolverine, Professor X, and Emma Frost (who I’d actually not encountered much before, but found delightfully tricksy).

In order to keep this review spoiler-free, I’ll stick to basics on the plot: someone has instigated a genocide on Genosha, an island of mutant ruled by Magneto. Coming in the wake, a shocked X-Men team tries to come to the rescue, only arriving when seemingly everyone has been wiped out. Everyone save Emma Frost, who has acquired a surprising new ability in the wake of the utter destruction wreaked on Genosha. What follows is Xavier and company’s attempts to help find, teach and recruit a new generation of mutants to deal with a world ever-more hostile to what they are and represent. The team must deal with a new group on the rise, the U-Men – surgically created mutants, who benefit from mutant organ grafts illegally harvested. All the while, another enemy continues to execute the final moves of its long-game, seeming to predict the moves of Phoenix, Cyclops and Beast, as they try to save the school, Professor X (who is starting to act a little strangely), and by extension the humans who may get caught in the middle.

The story moves at a steady clip, and the plot is both interesting and original. I read the whole book in just two sittings, it was so gripping, and I thought Morrison dealt with the characters and X-Men mythology extremely well. There’s a little more complexity to them all, partly the result of their nemesis’s ability to tap into their greatest fears and anxieties – this particularly affects Cyclops, who is trying to deal with his own emotional baggage; and Beast who, apparently, changes his beast-aspect (something I didn’t know before), and is coming to terms with what these new variations may mean for him and his ability to serve the X-Men in a capacity more than mere muscle – “Please don’t be alarmed,” he tells rescue workers on Genosha. “I know I look like a special effect, but we’re here to help.”

Emma Frost is my favourite character in this book, I think, as she is rather wicked and has no fear of taking her own, unorthodox approach to teaching at the Xavier Institute (she is, after all, a former ally of the now-deceased Magneto). For example, at one point, when a lesson is interrupted, she laments “Just as we were learning to implant deceptive erotic images into the minds of our enemies…” Her teammates often question her intentions and tactics, but ultimately it does appear that she has made a relatively painless transition from Magneto’s side to that of the X-Men.

The humour’s interesting throughout, but it’s used sparingly, in order to not detract from the serious situation. The story builds well, as characters and antagonists are drawn together for a final, climactic part, which sees the team come together (with some outside help) to save their wards at the school.

The artwork is handled by a number of artists, and while there are some I prefer over others, for the main it’s quite consistent, and there weren’t any sections that disappointed or were too stylised. It’s a visually impressive package to complement a solid story. There’s not much more one could ask for from a graphic novel.

This is a great storyline, and I can’t wait to get a hold of the second and third volumes. A really very engaging X-Men storyline, and one that should entertain all, as well as make them think a little bit – the various X-Men series have always been good at highlighting issues of racism, society, and acceptance, and this volume is no different.