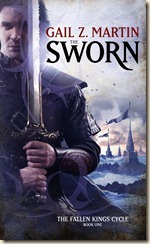 The Fallen Kings Cycle, Book One

As plague and famine scourge the Winter Kingdoms, a vast invasion force is mustering from beyond the Northern Sea. And at its heart, a dark spirit mage wields the blood magic of ancient, vanquished gods.

Summoner-King Martris Drayke must attempt to meet this great threat, gathering an army from a country ravaged by civil war. And neighbouring lands reel toward anarchy while plague decimates their leaders. Drayke must seek new allies from among the living – and the dead – as an untested generation of rulers face their first battle.

Then someone disturbs the legendary Dread as they rest in a millennia-long slumber beneath sacred barrows. Their warrior guardians, the Sworn, know the Dread could be pivotal as a force for great good or evil. But if it’s the latter, could even the Summoner-King’s sorcery prevail?

I’ve been aware of Martin’s work for a while, now, but for some reason I never got around to reading the first story arc set in her world (The Chronicles of the Necromancer, published by Solaris). As Orbit sent me a copy of The Sworn, and because it’s the start of a new series, I figured there was no better time to get stuck in, and I was rather happy with what I discovered within…

The Sworn is the beginning of a new, compelling epic tale set in a medieval-gothic world where the undead live cautiously alongside the living. The world is only just coming to grips with the chaos and disruption caused by Jared the Usurper’s bloody reign, when newer and potential greater threats begin to emerge: A plague is devastating the domains, creating tension and fear as scapegoats are sought; and a dark sect is desecrating the great barrows of the land, digging into evil magics long thought expunged, and a threat from the north is gathering its forces.

There are quite a few characters to get to grips with, and at the start it felt a little like I was lost amid a sea of people I didn’t know, like I was late to a rather large party. Even with the Prologue, which is intended to catch long-time readers up with what’s been going on, and give new readers an introduction to this world, I admit I was a little lost. Nevertheless, I stuck with it and I was rewarded for my patience; I found myself becoming familiar with the characters, politics, and creatures quite quickly, and some of them really started to grow on me.

And what a world Martin has created – the deathly, dark and gothic aspects and tones appealed a great deal. The world features ghosts, vampires (“vayash moru”), werewolves (“vyrkin”), and a necromantic magic system. The vayash moru and vyrkin have distinct politics and societies of their own, and we are introduced to a lot of it over the course of the novel. Issues of race also infuse the politics of the world, as some domains allow the vayash moru and vyrkin to live among them, openly-but-separate, while others still hunt them. The ghosts in this world interact with its living inhabitants, sometimes in strange and bizarre ways (the use of “ghost whores” is interesting, if also rather disturbing). The magic system is a blend of necromancy mixed with some Native American shamanism. It’s a good mix, and Martin does a very deft job of using it to add layers of atmosphere to the novel and world. There are also “dimmons” in this world (demons, basically, which made me raise an eye-brow the first few times I read their name – it seemed a rather pointless re-spelling). These creatures are sinister, vicious, and prey on the unwary travellers. The Dread, mentioned in the synopsis, are equally dark and sinister, as are the ashtenerath (reanimated corpses).

On a couple of occasions it feels like Martin’s trying to ‘authenticate’ her faux-medieval world by using phrases that aren’t really very helpful. Take, for example, this description of a character’s age: “He was a young man, a few years more than twenty seasons old”. This, to me, suggested he is ‘older than five’… But in actuality, he’s over twenty. To be fair, this instance is unusual and actually quite out-of-place, as 99% of the time, Martin’s writing allows the reader to naturally come to an understanding of the world, its political and societal norms. In fact, the author’s writing as a whole is very natural – other than the aforementioned age comment, the dialogue is realistic, accessible and with a good, natural flow. The slower pace of the plot might not suit everyone, but it did quite suite the story and atmosphere. That the pace was slower than expected was both surprising and a little disappointing, because the blurbs on the back of the book do suggest that Martin’s writing is quickly paced and “exuberant”, when I actually found some scenes and chapters dropped the pace considerably, drawing away from the story’s momentum. The Sworn is very much a the beginning of a new sequence, events and forces are still moving into place, so I imagine the sequel, The Dread, is going to be much more exciting, quicker paced, and I imagine feature a lot more action.

Gothic and interesting, the world is fully established and well-realised (this is the fifth novel set within it), and while I did have some minor trouble getting to grips with who everybody was and how they fit into the politics and plot, I became rather fond of some of them (for example, Aidane, Jair Rothlandorn, Jonmarc, and Cam). It would have been nice to spend more time with Martris Drayke, though, as I felt he didn’t feature as much in the novel towards the start of the novel as I had expected.

I can’t comment on Martin’s evolution as an author, as I’ve not read her previous work, but this is a very well-written and intricately plotted epic fantasy novel in a great setting, and I can’t wait for the second book in the cycle, The Dread. I would definitely recommend The Sworn. I would perhaps caution people of the uneven pacing, and also that they will likely get more out of reading the first four novels before reading this one, but, as I discovered, this is not essential to enjoy this novel.

Gothic and politics-infused Epic Fantasy. This is a very good, original novel and setting.

Chronicles of the Necromancer: The Summoner, The Blood King, Dark Haven, The Dark Lady’s Chosen