I’m a big fan of Amanda Downum’s Necromancer Chronicles, which have thus far been dark, gothic and evocative fantasies, set in an exotic world where the lines between the living and the dead are blurred. (It’s reminiscent of Gail Z Martin’s world, although I have to say I much prefer Downum’s creation and writing.) Both of the previous volumes in the series have been reviewed on CR, and if you haven’t yet checked either out, I would certainly recommend it!

The Drowning City was a good start to the series, not without some faults, but showed great promise for the future; while The Bone Palace was a superb, slow-burning supernatural fantasy and thriller, and fulfilled that promise.

Today, Orbit announced the artwork (by Larry Rostant) for the third book, Kingdoms of Dust: 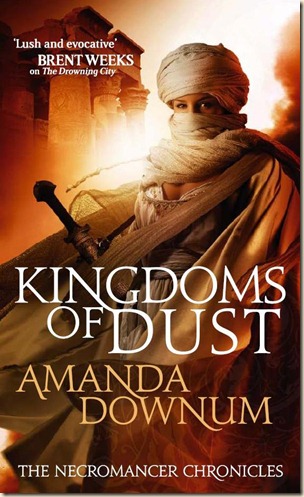 The new artwork sits nicely alongside the previous two novels’, with a more sandy-palette to suit the setting. I think it’s a pretty good cover, if a tiny bit derivative, but it does the trick.

[Please Note: After the break, there are some spoilers in the synopsis]

And, because no artwork post would be complete without an accompanying synopses, so…

With her master dead and her oaths foresworn, necromancer and spy Isyllt Iskaldur finds herself in exile...

Kingdoms of Dust will be published in all territories in December 2011 – so, some gothic fantasy reading to add contrast to the Christmas cheer, perhaps?

I’m really looking forward to this.

Here’s the artwork for all three books, together: 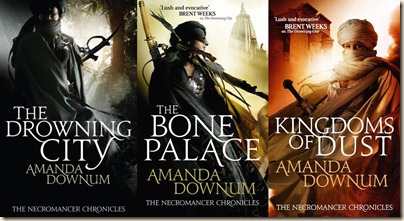 Posted by Civilian Reader at 2:35 PM