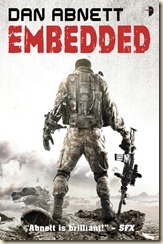 A journalist finds himself unprepared for a most unusual, potentially deadly predicament…

The colony planet of Eighty-Six looks as dull as all its fellow new worlds to veteran journalist Lex Falk, but when a local squabble starts to turn violent, and the media start getting the runaround from the military high command, his interest is seriously piqued.

Forbidden from approaching the battlezone, he gets himself chipped inside the head of a combat veteran – and uncovers the story of a lifetime. When the soldier is killed, however, Falk must use all his resourcefulness to get back home again… and blow the lid off the whole damn thing.

Since the Iraq War began in 2003, a lot has been made of the Pentagon’s willingness to allow journalists to “embed” themselves with combat groups, reporting from the frontlines how the war is going. In Embedded, Abnett takes this one step further, taking this theme and transferring it onto a hypothetical future of intergalactic expansion and journalism. It’s not only insightful and intelligent: it’s also a very satisfying and entertaining read.

As can be expected when reading a science fiction novel based in an entirely new setting, it takes a little while to acclimatise yourself with the politics, environment and society of this future. Drawing on a lot of contemporary issues in politics and international relations, however, Abnett is able to make things familiar at the same time as new. I didn’t sink into this as quickly as a Gaunt’s Ghosts or Horus Heresy novel, but this is entirely to be expected, as this lacks the familiar and established settings. That being said, the world Eighty-Six is written in a pretty accessible way, so you won’t exactly be lost.

Falk is a typical, worlds-weary and cynical journalist, who sometimes seems to be going through the motions of his career, while retaining a well-honed sense of what is newsworthy and also when cagey military attaches are trying to give the media the run-around. For the first third of the book, we follow him as he becomes acclimated to Eighty-Six, and through his eyes we are introduced to this world and the forces that push and pull on society. Earth has enjoyed a century of peace through another tenuous Cold War, as the three main powers look to the stars to expand, thereby diffusing much of the mutual hostility and hatred. However, as one power achieves greater success beyond Earth, natural jealousies start to simmer, and threaten to boil over.

When Falk finally becomes embedded in the mind of soldier Nestor Bloom, the novel takes a considerable turn – both in pace and also in style. The pace picks up, as Nestor’s unit is deployed to a settlement located in a troubled region, and we start to get the action that Abnett is so well-known for. The style becomes pretty strange for a few chapters, as we get a blended-perspective, mixing both Bloom’s and Falk’s perspective, as the latter’s mind and thoughts appear to bleed into Bloom’s, making him twitchy and off-his-game. And when Falk’s consciousness takes over from Bloom, things get really interesting (and sometimes quite funny), as he comes to grips with controlling a body that isn’t his, in the middle of an insurgency. His newly acquired – though far from complete – control of Bloom’s body also impacts those around him, as surviving members of the expeditionary force slowly group together and turn their attention towards survival and extraction.

With Embedded, Abnett shows that he’s just as comfortable and adept at writing in his own science-fiction setting as he is writing Gaunt’s Ghosts and Horus Heresy novels. That he is able to draw on contemporary issues of politics, international relations, journalism, conflict and war – inflected with some informed cynicism – makes Embedded all the more impressive, intelligent and satisfying. The commentary on the direction our world could be heading in isn’t subtle, but it’s well written, which makes up for its bluntness. There are shades of Richard Morgan’s Market Forces and Takeshi Kovacs series, and also perhaps a nod to Rogue Trooper (from 2000AD), and hints of many contemporary thrillers that deal with insurgency and war – such as those by Vince Flynn or Kyle Mills (who shares Abnett’s cynical sense of humour) – as well as movies like Black Hawk Down and The Kingdom. I really enjoyed this mix, and it’s not something I’ve come across much before.

Embedded is, at heart, a quickly-paced war novel, in a futuristic setting where the three main Earth powers have looked to the stars for expansion, exploration, resources, and conquest. The characters are realistically drawn, and dialogue is natural, very well-written (complete with both military and journalistic jargon), and with shades of humour that never feels forced.

The second half of the novel is much quicker and more intense than the first, but when it gets going, Embedded is gripping and near-impossible to put down, and you will find yourself compelled to keep reading, well into the night, until you reach the satisfying conclusion.

I really enjoyed this novel. Highly recommended for fans of science fiction and war/military fiction.

[Also, check out my interview with Dan Abnett & Nik Vincent]