An Interview with Kevin J Anderson

Kevin J. Anderson is one of the most prolific and popular science-fiction/fantasy authors working today. He is also one of my favourite authors. Long-time readers of Civilian-Reader will have seen how much I’ve enjoyed the first two volumes in his Terra Incognita fantasy series (the third, The Key to Creation, is out this year). 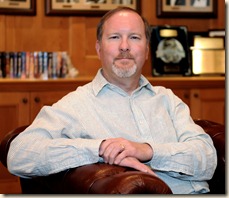 When I was younger, there were always some of his books in the house, and I should really thank my sister for introducing me to his writing (through his contribution to the Star Wars universe, The Jedi Academy Trilogy). While I’ve never managed to get around to his epic Seven Suns series (something I fully intend to rectify), he has a great talent for writing engaging, gripping and fun novels.

Last week I contacted Kevin, to see if he would be willing to answer a few questions about upcoming projects, his new novels, and writing. To my delight, he answered much quicker than expected.

Hellhole, a science-fiction novel you co-authored with Brian Herbert, was recently released in the UK. How would you describe the novel to a new reader, and where did the inspiration for the novel come from? 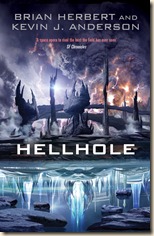 After writing 11 novels together set in the Dune universe, and after I wrote my epic Seven Suns series, Brian and I decided to tackle a universe of our own. In an expanding colonization initiative, people in a corrupt galactic empire head off to new planets, ready to start new lives as pioneers. Some of the new colonies are less pleasant than others, and the one called Hellhole is the last place on anyone’s list – wrecked by an asteroid impact centuries in the past, this is the place to go when there’s nowhere else to go, ruled by a deposed rebel general, it’s a dumping ground for misfits, outlaws, religious fanatics, and people on the run. It’s a rough pioneer story, but also filled with politics and intrigue.

Terra Incognita is a fantasy trilogy about sailing ships and sea monsters, the crusades and exploring the unknown parts of the world. Set in the Age of Discovery, with all the great sailing ships and explorers, it was inspired by the Prester John legend, a mythical Christian king in an unknown land on the far side of the world. The two continents are embroiled in an awful religious war, and both sides want to find the “Prester John” of the story, assuming he will fight with them in the conflict. It really means a lot to me, and hits deep with what I see as an endless cycle of religious hatred in our world by people who claim to know the “real truth.” This is some of the toughest emotional writing I’ve done, and I don’t pull any punches. In the final volume, the crusades reach a bloody culmination in the holy city of Ishalem, the rival explorers finally reach their mythical destination, and they have to confront the fact that reality might not be exactly what they have always been taught. (There, I hope that’s tantalizing enough!) 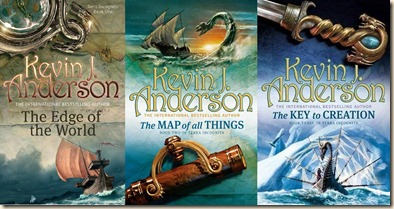 [ Reviews: The Edge of the World / The Map of All Things ]

You wrote some of the earliest novels for the Star Wars Expanded Universe (The Jedi Academy trilogy easily ranks among the best of any Star Wars literature, in my opinion). How did the opportunity to do so come about?

Completely by accident! Actually, I had published about seven original novels of my own, which were well-reviewed, and I worked well with my publisher and editor, so (without my knowledge) they submitted my name to Lucasfilm as a possible author to write Star Wars books. Lucasfilm liked what they read... and I ended up doing a total of 54 projects for them.

What was it like writing for such large, beloved franchises as Star Wars and Dune, which have their own, specific ‘rules’? Would you be interested in returning to either series?

First and foremost, I am a fan – I grew up living and breathing science fiction. I read Dune for the first time when I was 12, and I saw Star Wars when it was first shown in the theaters, when I was in my last year of high school. I loved doing the Star Wars work and it opened many doors for me, but it would be

difficult to do new work there, because there’s been so much published in the Extended Universe since I worked there, and the job of catching up would be nearly impossible.

For Dune, Brian Herbert and I are still writing new stories – in fact, this week I will be delivering The Sisterhood Of Dune, our next volume. We will be alternating a Hellhole novel with a Dune novel for the next several years.

Who did you grow up reading, and what first drew you to speculative fiction?

What originally grabbed me with science fiction was the George Pal film of War of the Worlds (when I was five years old). I was hooked on science fiction movies, then comic books, and when I was eight years old I dove in and read H.G. Wells’s Time Machine and War of the Worlds. As I grew older, I read a lot of Andre Norton, Ray Bradbury, Edgar Rice Burroughs, J.R.R. Tolkien, and of course Frank Herbert.

Looking back on your bibliography, which novel or series are you most proud of? Are there any that you wish you’d done differently?

I think Seven Suns and Terra Incognita are my best works... so far, although I will keep trying to stretch my abilities. My solo book Captain Nemo is possibly my personal favourite – and I’m thrilled that Titan Books is reissuing it this September. As for doing something differently... well, I never turn anything in until I am completely satisfied with it, but I hope my writing abilities have improved over the past twenty years! 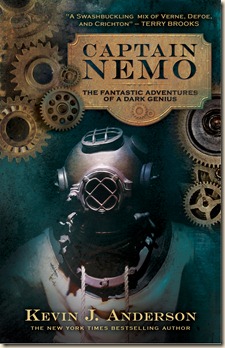 Do you have a favourite genre to write? Is this mirrored in your reading preferences?

Science fiction is my first and foremost love, in reading and in writing, but I love to do different things; I just wrote some humorous horror and had a blast.

What was your first foray into writing? Do you still look back on it fondly?

I wrote my first novel when I was 11 years old. I saved up money and bought my own typewriter and started hammering away. It was a fun story about a mad scientist who invents a serum to bring anything to life, so he animates a bunch of sculptures in a wax museum then goes on a rampage (because that’s what mad scientists do!) Yes, I still view it fondly.

Do you have any specific authorial habits or rituals? How are these affected for collaborative projects?

I like to outline my big books carefully and write very thorough notes (which definitely helps in the collaboration process), but my most specific habit is that I much prefer to write while hiking, dictating into a digital recorder. That way I get to do two things I love, at the same time.

What other projects do you have in the pipeline?

Always plenty! Brian Herbert and I have just finished The Sisterhood Of Dune, and I just delivered my third anthology of humorous horror stories, Blood Lite 3: Aftertaste.  I wrote a spec horror-comedy novel, which I’m editing now; my wife and I are wrapping up our young adult Star Challengers series to promote interest in the space program, and I just sold a new trilogy in the Seven Suns universe, “The Saga of Shadows”, set a couple of decades after the end of the previous series. I’ll be writing that soon, and Brian and I are going to start plotting the second Hellhole novel.

How do you keep busy when not writing?

A fantasy novel called The Winds Of Khalakovo by Brad Beaulieu, all the stories for this year’s Writers of the Future volume, and a new fantasy by Saladin Ahmed that will be published by DAW in the US.

Some free time... but that’s probably not likely. (I suppose I’d be bored anyway.)

Thanks so much to Kevin for taking the time out to answer these questions! If you’d like to know more about the author or his novels, check out his Website, and also follow him on Twitter.

A review of Hellhole should be coming very soon.

Posted by Civilian Reader at 11:34 AM