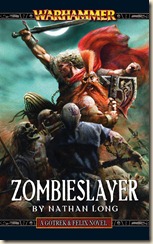 The dead rise, Gotrek & Felix put them back down

Pursued by the dark forces of Necromancer Heinrich Kemmler, Gotrek and Felix arrive at Castle Reikgard, where they must hold out against the zombie hordes.

The brutality of the siege is unremitting as wave after wave of horrific creatures, led by the undead champion Krell, attempt to take the walls. With supplies running low and morale sinking, the defenders begin to hear terrible whispers and endure awful nightmares. Suspicion and paranoia run rampant within the castle walls, and the defence seems impossible.

Somehow Gotrek and Felix must unite the forces of the Empire against Kemmler’s ever-growing legion until help arrives, or will the Slayer find his doom amidst the unrelenting undead…?

Picking up immediately after the events of Shamanslayer, this novel drops the reader right into the thick of it. The battle against the marauding beastman horde is over, but now the dead are starting to rise, and our already-weary heroes must fight once more. ‘Hans the Hermit’ from Shamanslayer is not at all who he seemed – instead of a vagrant old tramp, he is actually Heinrich Kemmler, one of the most powerful and feared necromancers in the world.

Felix, Gotrek and their companions are caught up in the retreat from the battlefield – after mistakenly being accused of killing a nobleman’s son (actually already dead and resurrected as a zombie) – and are then dragooned into helping with the re-fortification of Castle Reikgard as it comes under siege by a ten-thousand-strong army of the undead. While sabotage hurts the garrison’s ability to defend and turn back the tide of undead, the dwarfs set to work rebuilding the walls and other features, Felix twists himself in knots trying to figure out who Kemmler’s mole is inside the castle at the same time as navigating the internal politics and rivalries of the human armies.

Nathan Long has done an admirable job of conveying the tense atmosphere inside the castle; the proud but scared defenders beset by an implacable, relentless enemy, succumbing to paranoia and starvation as their situation worsens and their enemy matches them move for move. As the saboteur does more damage, suspicions spread throughout the human ranks, threatening to tear the garrison apart in a fit of paranoid irrationality. Felix and Kat find themselves disgusted and frustrated with their fellow men, but eager to help diffuse any situation that could lead to worse conditions within the castle walls.

With each novel, the author improves and appears more comfortable with his characters. With great writing, the series continues to entertain, and Zombieslayer – like Shamanslayer before – has the same adventurous feel of Will King’s first handful of Gotrek & Felix novels. Not only that, the novels are longer, which means there’s more fun and action. The series is an excellent example of adventure-filled, character-driven fantasy.

I’m never sure to what extent my familiarity with the characters and setting make this a better and quicker read. While it’s obvious that familiarity with the setting will ease understanding and acceptance of the premise, it still shouldn’t prevent me from making a decent judgement on the novel. After all, not all of the Gotrek & Felix novels have been brilliant, and a couple have been quite slow and disappointing. I wouldn’t suggest diving into the series at this point, because I think a new reader might feel somewhat adrift – particularly regarding the subplot involving Snorri Nosebiter’s memory loss and what this means for Felix’s oath to Gotrek (which forms the foundation of the whole series). Considering the superb price of the omnibus editions, however, for only a couple more pounds a new reader can get their hands on the first three novels, so it’s not as if catching up is an insurmountable goal.

Zombieslayer is an entertaining novel. The gentle humour is not quite as prominent as in previous volumes (certainly not as frequent as King’s original novels), but the atmospheric setting is well-crafted and -conveyed, and the characters well-rounded and realistically rendered. The siege is never boring, and Long manages to keep events interesting and fresh throughout. If you’re a fan of the series, then I highly recommend you keep reading the adventures of Gotrek & Felix, and if you’re a newcomer, then you should really go out and buy the first omnibus.

I’m incredibly fond of the Gotrek & Felix novels and its off-shoots, as I’m sure is plain from this and previous reviews on the site. It has everything one could ask from both a Black Library/Warhammer novel, and also from the fantasy genre as a whole. It benefits from a long-established setting, and anyone familiar with it should sink straight into the novel.

A pleasure to read, from an ever-improving author, Zombieslayer is a worthy addition to one of Black Library’s flagship Warhammer series.

Posted by Civilian Reader at 3:57 PM