Backlash, the fourth in the Star Wars: Fate of the Jedi series, will be published on March 10th in the UK. In case you missed my original review of the book, I’ve posted a truncated and slightly tweaked version, below. Looking back on it, I still remember it as being one of the best ones in this new series so far.

If you’ve read my other Fate of the Jedi reviews, then you know I’m a little on the fence about the wisdom of continuously releasing nine-book stories, as the momentum can often be seriously effected in the middle – even when the publishers and authors promised surprises and major events in the middle volumes of previous large story-arcs, often it’s not enough to satisfy all fans (true, something that is never possible). I do wish they would hone their vision a bit, though – make the story-arks shorter, which would allow for tighter plotting and greater excitement and broader appeal. But maybe that’s just me.

[If you’ve not read any of this series, I should warn you that there might be some minor spoilers contained in the review.] 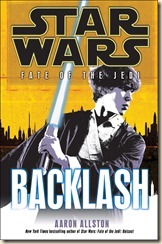 Like every book in the Star Wars series of novels, this one took a few chapters to get in to; not because Allston’s writing is in anyway deficient – far from it, he’s easily one of the best authors attached to this franchise (I bet he could have done a great job re-writing the scripts for Episodes I, II and III, for example…). The problem is the size of the main cast of characters: there are now perhaps too many ‘primary’ perspectives, which if you’re starting a novel you need to (re-)introduce to readers. We have Luke and Ben Skywalker; Han and Leia Solo; Allana/Amelia Solo; Galactic Alliance Chief of State Natasi Daala; Jedi Jaina Solo and Empire Chief of State Jagged Fel; some Imperial conspirators; and the Jedi under siege in their Temple on Coruscant. For the first 50 or so pages, the perspective of the novel shifted almost every page, which made it very stop-start and difficult to sink in to. If you compare this with some of the older Star Wars novels, such as Kevin J. Anderson’s and Timothy Zahn’s, which had smaller casts, it’s noticeable how the quality can be effected by trying to include too many primary characters. Anderson and Zahn’s novels were tighter, in my opinion, and therefore more fluid and easier to sink in to.

When Allston finally let’s the story flow, sticking with single perspectives for entire chapters or more, Backlash is gripping and Allston’s prose drag the reader on through events. Whether it’s the tense events on Dathomir, back with the embattled Jedi order on Coruscant, or Daala’s and Fel’s continued troubles with conspirators, when given a decent amount of space, Allston’s writing and plotting are exceptional and readers will find themselves hooked. There’s plenty of action (for once there’s no dogfighting in space, which was overly-featured in previous novels) and the pace never really lets up; after all, as Jaina Solo says herself in the novel:

The Jedi and Galactic Alliance are only slowly coming to terms with the new, greater threat of the new Tribe of the Sith that at last made first contact with the Skywalkers at the end of Abyss.

Posted by Civilian Reader at 5:15 PM