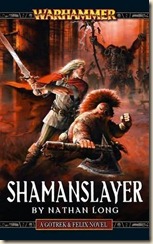 The ever-entertaining adventures of Gotrek and Felix continue into the 11th novel!

When Gotrek and Felix travel north to seek the remaining members of the Order of the Fiery Heart, they find themselves with new companions and allegiances.

Of course they have heard the rumours of beastmen lurking in the Drakwald, but there is far more to the story than they could have imagined.

The malignant forces of Chaos are at work, and Gotrek and Felix find themselves battling not only for their honour, but for the very future of the Empire itself.

Picking up almost immediately after the end of Elfslayer, we find Felix at the doors of his father’s home in Altdorf, seeking closure and answers to what he discovered in his previous adventure. Events, as always, have a tendency to get in the way of the best-laid plans, and he is confronted by a Knight of the Order of the Fiery Heart, who lays claim to the sword he has carried since the earliest short-stories to feature our indomitable heroes. Thanks to the intervention of an enthusiastic squire, however, Felix is granted custody of the sword in return for helping Teobalt, the last remaining, elderly knight of the Order. The other members of his Order rode north to battle the invading forces of Chaos, but no word has been heard of or from them for some time, so Teobalt is insistent that Felix and Gotrek must retrieve the Order’s sacred relics. After a brief, violent stay in a northern town under the thumb of a corrupt former soldier, our heroes head off in pursuit of the band of beastman the Order supposedly was hunting before they disappeared.

Some of the new characters we’re introduced to are welcome additions to the series. Specifically, knightly novitiate Ortwin’s admiration of Felix and Gotrek, based on his reading of My Travels With Gotrek (the great work Felix is turning Gotrek’s tale into), makes Felix uncomfortable, and unable to dissuade Ortwin of the folly of thinking adventuring to be grand and romantic; Felix takes on a sense of responsibility for the squire, which offers up some amusing moments as our heroes’ world-weary cynicism comes face-to-face with Ortwin’s youthful enthusiasms and worldly innocence.

A couple of previously-featured characters return, too. Snorri Nosebiter, the fiercely-loyal yet slightly simple and addled slayer who has accompanied Gotrek and Felix in many past adventures – now suffering the ravages of age on a mind and body that has been put through some of the most brutal punishment imaginable. Snorri’s predicament occupies Gotrek’s mind a fair bit, as he sees his friend struggle and silently suffer; it’s a touching aspect added to Gotrek’s usually stony character. Kat – last seen as a 7 year old orphan in Trollslayer – has grown up to be an adventurer and smiter of Chaos beasts herself, and is another youth in awe of Felix and Gotrek’s achievements. In Shamanslayer, she also plays the role of love-interest, which makes Felix somewhat conflicted; and, as often is the case, saves Felix’s life a couple times.

One thing that is almost immediately apparent with this eleventh novel in the series, is that Nathan Long seems to have located the classic fun and feel that characterised earlier volumes. Shamanslayer was, for me, more reminiscent of William King’s first handful of novels (particularly Trollslayer, Skavenslayer, Daemonslayer and Dragonslayer) than some of the other recent novels: the mixture of swashbuckling-yet-realistic adventure, a good sense of humour, and a well-paced plot all mesh perfectly to create an exciting, engaging and enjoyable read.

Another considerable improvement is the author’s description of the atmosphere and environments experienced on the quest – they are far more evocative than in Elfslayer (a good, if slightly uneven instalment of the series), and I found it easy to imagine almost every scene in great detail. The close, dark menace of the beast-populated Drakwald Forest is brought brilliantly to life on the page, and it’s easy to appreciate the disorienting nature of it as Felix and friends at times run blindly through it at night, pursued by enemies.

The action scenes are well-written and fast-paced, therefore not ruining the quick pace of the plot (it’s a frequent problem when they are over-written); the antagonists (be they human or beast) are satisfyingly portrayed, just evil or bad enough to make us dislike them while avoiding cartoon-like villainy; and our heroes remain grounded and realistic. The particularly ‘special’ aspect of the beastman herd in the novel is a pretty horrific ability (not to mention an inventive one), and one that would truly have dire consequences for the Empire if allowed to travel further into its territory.

Overall, then, this is exemplary and gripping fantasy writing. Irrespective of whether or not you are a fan of the world, or familiar with the setting, Shamanslayer is a great fantasy adventure.

Entertaining, yet also detailed and thoughtful, this is a very highly recommended novel and an excellent addition to the series.

[If you would like to purchase any books in the Gotrek & Felix series, or the new spin-off series featuring some favourite characters, visit Black Library’s web-store, here.]