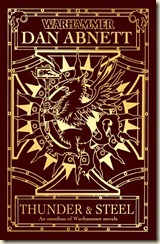 Across the Old World, the powers of Chaos seek to bring corruption and death, poisoning the minds of men and filling them with hatred and fury. Only the bravest dare stand against them – two Empire soldiers, marching into the cold wastes of Kislev to face the barbaric Northern hordes, where one will lose his soul to the Ruinous Powers. The high elf Gilead Lothain, who seeks to strike at the servants of the Dark Gods in a quest for vengeance that can never end. The ranks of the noble White Wolves, who stand to defend the majestic city of Middenheim until the last man, never backing down in the face of their enemies.

Thunder and Steel is an epic collection of Dan Abnett’s Warhammer fantasy, including the novels Riders of the Dead, Gilead’s Blood and Hammers of Ulric, plus short stories “Swords of the Empire” and “Shyi-zar”, and the full graphic novel of The Warhammer.

In Thunder & Steel, Dan Abnett’s Warhammer work is collected into one volume. Some of this work was written in conjunction with others – Gilead’s Blood and Hammers of Ulric were written with Nik Vincent, and the latter was also written with James Wallis. Collected into this new omnibus, these long-hard-to-find novels are great additions to any Warhammer library.

While these novels do not quite reach the level as Abnett’s Warhammer 40,000 fiction, there is a lot on offer, and a lot that fans of Warhammer fiction will love. Abnett’s well-known skill for writing intense, in-the-thick-of-it action is clearly in evidence, made all the more intimate by Warhammer’s predominantly hand-to-hand, more in-your-face combat.

Gilead’s Blood follows the saga of a “doom-laden” elf, Gilead Lothain and his faithful retainer, Fithvael. Becoming hardened and cold following the death of his twin, with whom he shared a particularly strong bond, this is a collection of episodic stories (much like Hammers of Ulric, see below), each about Gilead’s adventures in the Old World, as told by a narrator revealed late in the book. Plenty of action, and it was nice variation to have an elf, rather than a human, as the ‘star’. I actually missed this novel, when it was first published in 2001, so I was glad to get a chance to read it this time around. Gilead’s a darker elf than one might expect (while not, at the same time, being a Dark Elf), driven by his passions, and whose actions are not always those of a noble elf.

Hammers of Ulric is still one of my favourite Warhammer novels – comprised of separate short stories and scenarios, written by Abnett, Vincent and Wallis, but forming a single overall story, we follow the White Wolves as they fulfil their knightly duties, protecting the mountain-top city of Middenheim and also its surroundings. The episodic nature actually worked really well, here, and it didn’t feel fractured neither this most recent reading or the first time, all the way back in 1999. I really liked the characters in this novel, who we get to know quite well. I’d like to read more of them.

Rider of the Dead, in particular, has some great battle scenes. It is the story of two Empire soldiers, Karl and Gerlach, who join a campaign to repel the savage Northern Tribes, and get their first taste of battle. The novel follows them through the campaign. The last major battle sees our protagonists’ destinies thrown into turmoil as Karl is captured by the forces of Chaos and Gerlach is taken in by the Kislevites, and fate conspires to throw them onto opposing sides in the eternal war between humanity and the armies of Chaos. The novel races towards a cataclysmic showdown, and was for a very long time the best Warhammer novel BL had published. At least, the ‘grittiest’ – my favourites remain Will King’s Gotrek & Felix novels. (I think I remember correctly that, when Riders of the Dead first came out, people were quite taken aback – it’s level of detail, and also the ‘grittiness’, reinvented the mould for Warhammer fiction, and paved the way for some truly excellent developments – just read any of the recent Warhammer Heroes novels to see what I mean.)

“There was nothing… any man could have done. The North was a primordial torrent, in the form of flesh. He could have no more stopped it than raise up his hands and halt the giant clouds that sailed, sedate as galleons, across the oblast heaven.”

The Warhammer, a graphic novel tale that is included in the omnibus is built around a solid script with many of Abnett’s trademarks, and while the artwork is good, it’s perhaps not the best place to have included it? I think it might have been better to release this separately, in a larger format. The two short stories are also great slices of Warhammer fiction, and very nice additions to the book.

Abnett’s work has had a considerable impact on the evolution of Black Library fiction, and reading these novels you can see the start of when Black Library really picked up their game – anyone familiar with their recent output can tell the publisher is going from strength-to-strength.

As I said earlier, the fiction in Thunder & Steel isn’t quite as good as Abnett’s Gaunt’s Ghosts or Horus Heresy work, but the book showcases some of Abnett, Vincent and Wallis’s best early work for Black Library, and I really loved the extra content as well. Character development, plot and also dry humour are allowed some space alongside all the excellent action (though not as much as we get in more recent BL releases). Each of the book’s component stories is nonetheless satisfying and entertaining. This is a great omnibus. I think it would also be a good starting-place, if you are new to Warhammer fiction.

(The three novels that make up Thunder & Steel are available separately as eBooks from Black Library’s website.) 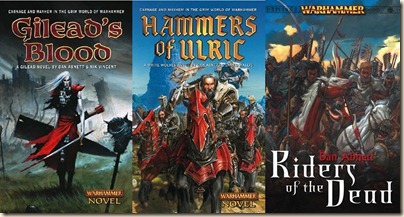 In case you missed it, last month both Dan Abnett and Nik Vincent answered some questions for an interview, which can be read here.

Posted by Civilian Reader at 2:20 AM