“Among Thieves” by Douglas Hulick (Tor) 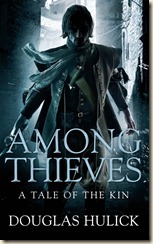 The Tales of the Kin begin

Drothe is a Nose, an informant who finds and takes care of trouble inside the criminal organization he’s a part of. He also smuggles imperial relics on the side.

When his boss sends him to Ten Ways to track down who’s been leaning on his organization’s people, Drothe discovers hints of a much bigger mystery. Someone is trying to stir up trouble between lower-level criminal organizations, including the one Drothe belongs to. And there’s a book rumored to contain imperial glimmer (or magic) that a lot of very dangerous people seem to be looking for - including two crime bosses known as the Gray Princes.

When Drothe discovers the book, he finds himself holding a bit of swag that can bring down emperors, shatter the criminal underworld, and unlock forbidden magic…that's if he can survive long enough to use it.

I’ve been waiting for this novel for what feels like a very long time, ever since the artwork, synopsis, and glowing endorsement from Brent Weeks appeared on the internet. It’s always a fear with highly-anticipated books that they won’t live up to expectations. Such was definitely not the case with Among Thieves: This was a pleasure to read – full of intrigue, colourful and realistic characters, and a fast-paced, action-packed plot.

Right from the start we are thrown deep into the world. Drothe operates in the vast and intricate underworld of Ildrecca, a Byzantine-esque city, where a burgeoning black-economy and society exists beneath the iron-fisted rule of the reincarnating Emperor. The history Hulick’s created for this world is fascinating – it’s fantastical, but it also feels very real – and with the bits and pieces he reveals over the course of the novel, one gets the sense that this world has a lot of potential. The plot rattles along at an impressive clip, which doesn’t give us much time for sight-seeing or getting to know the world in too much depth, but it has enough familiarity that readers should feel quickly at home in it.

Hulick has managed to give all of his characters depth, and none of them are cliché or dull. Even his minor characters are well-constructed and don’t feel like mere props. Drothe in particular is a great protagonist: our hero, certainly, but he is also a creature of his environment – he has his honour, but it’s not as clean as a standard hero’s; he’s a little ragged-around-the-edges; he’s not averse to using dirty tricks or getting stuck in (though he’d prefer to avoid conflict for obvious reasons); he’s handy with a blade, but doesn’t mind using anything that can give him an extra edge (poisoned blades, for example); if a situation calls for it, he will grudgingly betray one-time-allies; and he’ll do whatever it takes to protect his own interests.

Hulick’s prose is incredibly inviting, and I felt almost immediately at home in his world, despite it being wholly new. The author’s use of dry humour is also excellent. There are some short passages of exposition, near the beginning, that some readers might not approve of, but even here Hulick’s writing (and obvious passion for history) shines through and the passages remain interesting and don’t detract from the story – they are properly integrated and the flow of the narrative continues, unbroken. That being said, where I thought the novel was sometimes let down was the lack of explanation of certain things – there were times when I thought just a little prod in the narrative to explain how this or that issue or thing was important to the story might have been beneficial. For example, not much is made of his side-line in smuggling relics – while much can be inferred from what he says and the secrecy that must be maintained, it seemed that there could have been more to this. Some more of Drothe’s history with Degen would have been welcome, also. Perhaps some of this could have been provided if there had been an second perspective? (The entire novel is told from Drothe’s point of view.)

It’s made clear at many points in the novel that Hulick is a lover of books and history, and the quote below certainly should appeal to all bibliophiles the world over:

“I took a deep breath, savoring the smell of ink, paint, paper, and chalk. For me, this was the aroma of knowledge, of history, and I loved it. It didn't matter whether they were copying histories or inventories; as far as I was concerned, there was magic in the air.”

One of the things that will strike you early on is how quickly-paced this novel is. There’s tons of action, which keeps events moving, and you get a sense of just how in over his head Drothe is – his participation in the events taking place is accidental, but soon he finds himself right in the middle of a vast network of competing interests, and he must struggle to fight his way out before one of the many factions after him gets the chance to  “dust” him. From the opening scene (in itself, quite a dark one to start with), to the final pages, there is not much let-up in the action and momentum of the plot. It should perhaps be mentioned that the blurb on the back cover does suggest a quick acquisition of the Book – this isn’t the case, as it happens halfway through the novel, after a good deal of intrigue, snooping, happenstance, and action. This isn’t a bad thing, it’s just something to be aware of. To keep the reader guessing, Hulick throws in some twists around the middle-mark, which adds yet more levels to the situation Drothe has stumbled into. Indeed, there are quite a few twists and surprises along the way, which does make it difficult to discuss the plot too much, lest I spoil it for anyone.

The novel does have the feel of an opening act, which some readers may not like, but I found particularly welcome, as the world is superb, and Hulick offers hints of so much more potential in the setting and scope for future novels (there are at least two more novels featuring Drothe). Exploring the divide between Imperial and Kin societies, for example, lends itself to near-endless opportunity.

As a debut, Among Thieves is great, and while it suffers some teething issues common with debuts, it shows tremendous promise. I can only imagine how good Hulick’s future output will become as he develops his world, characters, and style further. Solid fun and briskly-written fantasy, this is very much recommended to all fans of the genre who want something that isn’t epic, but remains plot-driven and character-centric. I really enjoyed this novel. It kept me up at night, as I had to read “just one more chapter”, which frequently turned into many chapters, and last night turned into “I am going to finish it, regardless of what time it is!” (3am, as it turned out.) If only the novel had been a little longer; as I turned the final page, all I could think was, “I want more…”

Doug Hulick is definitely an author to watch. Highly recommended. 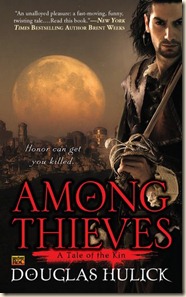 [Come back tomorrow for an Interview with Doug Hulick!]

Email ThisBlogThis!Share to TwitterShare to FacebookShare to Pinterest
Labels: Among Thieves, Douglas Hulick, Fantasy, Review, Tales of the Kin, Tor