“The Unnamed” by Joshua Ferris (Penguin) 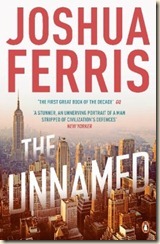 An unsettling picture of modern America

In an America gone awry with strange weather, New York lawyer Tim Farnsworth suffers a peculiar affliction: the inability to stop walking. While his wife, Jane, struggles to keep their family together in the face of the unfathomable, Tim alone must battle to survive pitiless surroundings, encounters with hostile strangers, and the unrelenting demands of his own body. These challenges force Tim to ask life’s most pressing questions, which he answers in a final return on foot across country to reunite with his wife and daughter.

Stripped of all defences, and the sense of hope that lies at the very heart of the American dream, Farnsworth is compelled to confront the terrifying reality of what it is to be a human being.

In this story of a man inflicted with an inexplicable compulsion, Joshua Ferris offers an ambitious exposure of modern life and the human condition. This is a modern-day tragedy, which, while occasionally lacking in emotional resonance, is nonetheless an arresting read.

The story of The Unnamed falls roughly into two parts. In the first, Tim struggles with his condition while attempting to preserve his safe and comfortable life; in the second, he forgoes the protection of his family and embarks on a journey from which he believes there will be no return. I found the first portion of the novel less gripping than I might have hoped. Ferris’s representation of the Farnsworth family seemed a little over-distant, even cold. I did not connect with the characters and their relationships early on, which left me sympathetic to their situation and impressed by Ferris’s language and ingenuity, but unmoved. That being said, the details of this family’s attempt to come to terms with something beyond understanding are well-conceived: the elaborate preparations for Tim’s walks, the system he and Jane develop for how to bring him home, demonstrate a desperate attempt to make manageable and comprehensible something that defies comprehension.

For me, the novel really came into its own once Tim left home. Without protection, defence, or comfort, his character is exposed. Paradoxically, it is not until he leaves Jane that the extent of his love for her becomes apparent. It is in this portion of the novel that the tragedy of his plight is fully apparent, as his story gains the emotional dimension that seemed lacking earlier on. His struggle to outlast his own physical compulsions invites literary comparisons: he is at once a new Lear on the heath and a modern-day Odysseus wandering with no hope of homecoming.

The Unnamed takes place in a world that feels at once familiar and unsafe. The setting is recognizable: the story takes place in what is apparently a modern-day America, and neither its society (and the people in it), nor the technology it runs on, are at all foreign. However, as Tim is forced out of the comforts of the world he has known, first onto the streets of Manhattan and its surrounding area and then into the wilds of North America, it becomes apparent that this world is a hostile one. Tim is occasionally greeted with kindness from strangers; he is just as frequently met with cruelty or violence. As he tries desperately to return to his version of normality – the house in the suburbs, the beautiful wife, and the partnership at a successful law firm – the cracks in what he believes to be stable become ever more apparent. And all the while, snow paralyses cities, and rain and wind rage.

Ferris has created a world replete with uncertainty. The novel’s narrative jumps, largely from one point of destabilisation or crisis to another, with instances of healing and peace more often recalled than directly portrayed. Ferris’s writing is taut and well-balanced, varying from spare dialogue to passages of rich and detailed description. The novel is filled with images and inventions at once whimsical and chilling, among them a murderer who announces himself to his scapegoat’s lawyer, and a mysterious, possibly climatic, event that results in New York City being carpeted in dead bees.

The novel walks a disconcerting line between speculative fiction and magical realism. Were it set fifty years later, it could be easily pinned as the former; fifty years earlier, and it would be the latter. The dramatic weather seems to suggest the onset of climate change, while Tim’s mysterious condition could almost be a curse: it has no discernible psychological or physical cause, and seems to be most fitly explained as a punishment for taking one’s life for granted. The dead bees (possibly my favourite image from the novel) are at once the shocking realisation of current warnings about our environment, and a dramatic occurrence reminiscent of a biblical plague.

In the world of The Unnamed, there is little, if anything, that can be explained. It is an unsettling novel that leaves us grappling with Tim’s plight, and questioning exactly how much the crisis in the world of the novel is meant to reflect on or anticipate one in our own.

Posted by Civilian Reader at 10:54 AM