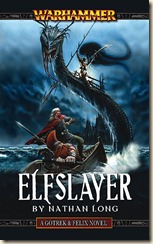 The latest adventure from the Black Library’s oldest duo

Trollslayer Gotrek Gurnisson and his human companion Felix Jaegar reluctantly travel to the port city of Marienburg to fulfil a last request from Felix's dying father, hoping to save the reputation of the Jaegar family name. However, a chance meeting with their old acquaintance Max Schreiber (who was a recurring character earlier in the series, and a rival for another recurring character, Ulrika’s attentions) knocks them well off course, after an initial, disastrous attempt to fulfil their supposedly simple task.

Max, the Imperial wizard has been sent by his college to investigate some disturbing magical phenomena off the northern coast of the Empire. Bringing along with him an impressionable seeress, who immediately becomes infatuated with Felix (who doesn’t want her attentions, and keeps finding himself in situations resulting in a reprimand from Max).

Pretty soon, the heroic duo and their companions find themselves caught up in a deadly situation, with seemingly no escape. As enemies old and new keep cropping up, Felix and Gotrek face their latest, perhaps greatest adventure.

When the novel opens, Gotrek has descended further into an alcoholic slump, and Felix is spinning his heels, waiting for something to happen. It’s amazing how quickly one gets back into the swing of the series, familiarising ourselves again with the characters almost instantly. It’s a bit of a slow start, and it takes a long while for the elves to actually show up, but the novel takes some interesting twists and turns, and Nathan Long’s writing is solid throughout. There’s a little more delving into Gotrek and Felix themselves and how they’ve managed to survive so long, with barely any evidence of time affecting them. The jokes and quips are still amusing, adding a lightness to the novel that makes it all the more enjoyable.

It took me a long time to work my way through the novel, because of a number of unavoidable distractions, so it’s possible that I could have enjoyed it a great deal more had I had the freedom to just sit down and read it.

If you are a fan of the series, or Warhammer as a whole, then you should certainly enjoy this novel. The next in the series, Shamanslayer is already out, too, so you won’t need to wait at all for your next fix.

A solid addition to the series.