“The Sea of Ghosts” by Alan Campbell (Tor) 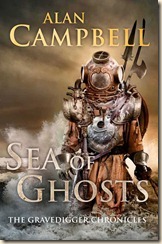 An astonishing new series from the author of The Deepgate Codex

When the last of the Gravediggers, an elite imperial infiltration unit, are disbanded and hunted down by the emperor they once served, munitions expert Colonel Thomas Granger takes refuge in the unlikeliest of places. He becomes a jailer in Ethugra – a prison city of poison-flooded streets and gaols in which a million enemies of the empire are held captive. But when Granger takes possession of two new prisoners, he realises that he can’t escape his past so readily.

Ianthe is a young girl with an extraordinary psychic talent. A gift that makes her unique in a world held to ransom by the powerful Haurstaf – the sisterhood of telepaths who are all that stand between the Empire and the threat of the Unmer, a powerful civilization of entropic sorcerers and dragon-mounted warriors. In this war-torn land, she promises to make Granger an extremely wealthy man, if he can only keep her safe from harm.

This is what Granger is best at. But when other factions learn about Ianthe’s unique ability, even Granger’s skills of warfare are tested to their limits. While Ianthe struggles to control the powers that are growing in ways no-one thought were possible, another threat is surfacing: out there, beyond the bitter seas, an old and familiar enemy is rising – one who, if not stopped, will drown the world and all of humanity with it…

This is the first novel I’ve read by Scottish author Alan Campbell, and it is easily one of the best I’ve read in years. This novel is almost indescribably good.

The Sea of Ghosts is a novel of honour, revenge, loyalty and perseverance, set in a world ravaged by unfathomable science and magic. Falsely accused of treason, the surviving members of the Gravediggers are forced to go underground, or flee the imperial capital altogether. Granger, our hero, has fled to Ethugra with his comrade Creedy. Ethugra is a twisted, darker version of Venice, if you were to replace the palazzos and fine architecture with multiple jails, constantly in need of repair and modification as the toxic and caustic seas continue to rise.

Campbell’s characters are universally realistic and complex. Granger’s sense of honour is frequently tested by his chosen profession (that of jailer), and his life is turned upside down after Ianthe arrives, creating an irreparable rift between him and his former comrade-in-arms. As events progress, we see just how determined Granger is to make up for past mistakes. He also reveals a MacGuyver-esque ingenuity that serves him well as we follow him on his personal journey. Ianthe is a tragic figure, someone who has only experienced a world intent on taking advantage of her gifts, never looking out for her best interests; as she deals with the multiple factions intent on harnessing her powers for their own ends, she comes to develop a very harsh world view, and some of her choices and actions are quite chilling.

Campbell introduces more perspectives as the novel progresses, and we gain a more nuanced picture of the protagonists and nominal antagonists of the novel. Granger’s perspective, of course, predominates, but Ianthe’s comes to feature prominently as well, as we get to know her more, and she attempts to get to grips with her unique powers. Maskelyne is another interesting character: a metaphysicist and treasure hunter with far more than just wealth on his mind, the reader will come to develop a mixed impression of him, as his possibly noble agenda is sullied by the single-minded brutality to which he resorts to achieve it. It is through Maskelyne that we learn the most about the Unmer, and especially their artefacts (he is quite the fervent collector).

The world of the novel is as important as the characters, and as complex and interesting. Life is defined by a person’s ability to avoid the toxic brine, and the unlucky masses who are unable to avoid its touch and mutating effects are forgotten and, under Maskelyne’s harsh rule of Ethugra, often used for brutal sport, entertainment, and experimentation. The harsh life of this world’s people is brilliantly portrayed on the page. Among the dangers presented by the ever-rising sea-levels, citizens and misfits must contend with brutal dictators, the occasional escaped Unmer (a species we learn tantalizingly little about), and also ever-hungry dragons with peculiar addictions.

It’s a bit difficult to locate The Sea of Ghosts in the fantasy genre as a whole. There are a plethora of elements and inspirations drawn from so many sub-genres and non-fantasy genres, and in the second half, Campbell starts bending the fantasy genre to feature some things that are usually reserved for sci-fi (metaphysics, for example). It’s handled expertly, even if it was a bit of a weird addition to the novel, and certainly promises some interesting developments to come in the series. The genre mash-up reminded me of Mark Charan Newton’s Red Sun series (one of my favourite fantasy series). There are also elements of the novel that reminded me of China Mieville’s New Crobuzon novels, and maybe a little bit of Neil Gaiman at his darkest (but not weirdest – the atmosphere was akin to that in American Gods).

The plot is tight and quickly paced, and even though it’s obvious that this is the first part of something larger, it doesn’t suffer from the weaknesses that often characterise first parts of series – the world-building is expertly interwoven into the plot, and the story doesn’t get bogged down into long tracts of exposition. The aforementioned themes Campbell weaves into his novel are classic (betrayal, revenge, family), but the world into which they are located is highly imaginative and original. It is a world so full of weird, wonderful, and sometimes horrifying invention, it’s captivating. The Unmer artefacts in particular are an intriguing element of the world – very little is known about them, how they work and also what some of them do; only a handful of collectors understand even surface-level details about the Unmer creations, and trove-hunters have to tread very carefully when they find an artefact.

I enjoyed this novel really very much. Campbell’s prose is sublime, possessing that indescribable quality that sucks you in, envelopes your imagination and pulls you happily along for the ride; insistently readable and compelling. The novel kept me up until 4am on three occasions, as “one more chapter” turned into three or four. The ending will also leave you gasping for more, as the futures of the characters and also the world are left unclear. I cannot wait for the next book in the series.

Campbell’s knack for atmospherics is almost peerless, and his innate storytelling ability is awe-inspiring. The Sea of Ghosts is superb and essential fantasy reading.