This is just a quick post, because I stumbled across this today on Amazon UK: 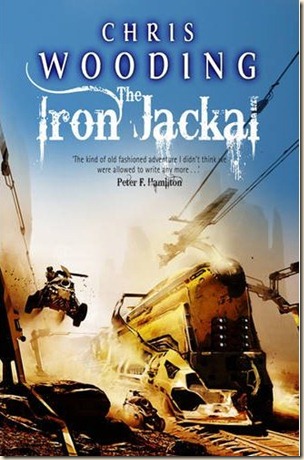 Long-time readers of the site will know that I’ve really enjoyed the previous two novels in the Tales of the Ketty Jay series – Retribution Falls and The Black Lung Captain – so any news of The Iron Jackal is of great interest to me. And, I believe, it should be to you, too.

Vardia is descending into chaos. And that makes it a good time to be a freebooter. The Archduke has evidence that incriminates the Awakeners, a powerful religious sect, and he’s determined to use it to bring them down. If they don’t surrender their Imperators – half-confessor, half-inquisitor, and just possibly half-daemon as well – then he has threatened to ban their religion, and have their Imperators executed on sight. But Awakeners won’t give up without a fight, half the country is on their side, and there’s more than a hint of civil war in the air.

Never one to miss an opportunity, Captain Darien Frey has hit on a lucrative plan: robbing Awakener temples, and selling their relics back to them through the feared pirate, and former fiancée, Trinica Dracken. Things are finally looking good for the Ketty Jay and her crew... until the Shaklemores, bounty hunters to the aristocracy, catch up with them, anyway. They kidnap Crake, one of Frey’s most valued crewmen, and vanish with him. Crake is wanted for murder – he has been for years – but is his kidnapping in the name of justice or is something altogether more sinister going on behind the scenes?

If Captain Frey wants his man back, he and the Ketty Jay are going to have to find out – even if the quest leads them into the heart of the civil war, to the treason and invasion threat beyond.

This sounds like the novel is going to be even more exciting and action-packed than The Black Lung Captain.

I have no idea if this is the final artwork for this third instalment in the Tales of the Ketty Jay series, but I must say I think it’s rather eye-catching. A news piece on the author’s website dated February 17th said the artwork was still being tweaked, but there’s been nothing new since then, and Amazon was the only site I could find that had this image. It does fit in with the aesthetic of the previous novels (sort-of, this is a lot more brightly coloured, but the font, etc., are the same), so I thought I’d share it, just in case. [If it turns out that this is not the final artwork, I’ll post again with the final cover when I find out.]

The Iron Jackal is currently slated for an August 18th release through Gollancz in the UK.

In related Chris Wooding news, it looks like his previous fantasy series, The Braided Path, will be re-issued as an omnibus in April 2011 (this will also have new artwork, according to the aforementioned post, from Wooding’s website, but I couldn’t find it anywhere).