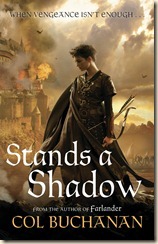 Buchanan gets even better…

Still grieving the death of her son, the Holy Matriarch of Mann has ordered her troops to embark on a mission to the Mercian Free Ports. Riding at the head of her army she plans to finally conquer the city of Bar-Khos, whose walls have kept them at bay for ten long years.

Ash has other plans for her. The old Rōshun warrior is determined that he will have vengeance for the crimes she has committed. But such a course of retribution is in direct opposition to everything he has lived for – this isn’t a Rōshun vendetta – it’s personal.

While Ash battles with his conscience, Ché, the Matriarch’s personal Diplomat and assassin, is questioning his own path. Watching as the Mannian army slaughters their way across the world, he questions the beliefs he’s been taught to enforce.

As the battle for Bar-Khos intensifies, more and more lives are affected: Bahn who leaves all he loves in the city to try to protect it from the ravening Mannian empire, Bull the murderer who senses a chance to make things right, and Curl, the young prostitute who is determined to seek her own retribution on the field of battle.

When the two armies clash, all looks set to be decided. It’s not sheer force that will win this battle, but the tormented determination of one man seeking redemption...

Farlander was easily one of my favourite books of last year, and I’ve been eagerly awaiting the second instalment of Buchanan’s series ever since. With Stands a Shadow, Buchanan has done everything to build and improve on the first novel. This is a great series.

A lot happens in the opening chapters, as we are reacquainted with the world and characters, as well as introduced to a couple of new faces. Ash, the Rōshun at the centre of Farlander is still deep in the Mann empire, still mourning the events that closed out the first novel (something I had not expected, and was quite distressed by, so invested had I become in the characters). Ché is resting up before he receives new orders from the Matriarch. The defenders of Bar-Khos are waiting anxiously for the Mannian response to the death of the Matriarch’s son. The situation is tense, and the world is just days away from greater conflict.

Some readers might think events towards the beginning of the novel were a little too choppy, but I do think it was necessary to reintroduce the main cast and locales, and Buchanan has done this very well, without also giving us bucket-loads of information and exposition.

One of Buchanan’s greatest strengths is his gift for characterisation – even peripheral, single-scene characters are well-defined and realistic. His main cast are unique characters with recognisable voices and styles of their own, and there is a sense of getting to know them as the novel progresses. This makes the whole book a very enjoyable read as, even if a character is only fleeting, they never feel pointless or overtly a narrative device.

Ash and Ché remain great, central characters, and we spend more time with them than any other single character. Both of the characters live under very different circumstances, and have antithetical world-views. At the same time, there is a symmetry in their concerns, as both are dealing with internal struggles based on questioning their roles and place in their respective societies: Ché is beginning to question his profession and his people – their politics, religion and also social mores (although, he is not entirely immune to the appeal of the latter). No doubt a result of his undercover training with the Rōshun (who are the polar opposite of the self-indulgent and vulgar Mannians), it becomes clear that Ché will face some important and life-changing decisions as the novel progresses. Ash has accepted that his chosen mission goes against the teachings of the Rōshun, but feels duty-bound to pursue it nonetheless. In addition, Ash is dealing with his ever-debilitating health and a string of bad luck. This makes him quite a different type of hero from what we’re used to seeing in action-packed fantasy novels. Refreshingly not from the usual stock, he is in his 60s, but still hard as nails and more than capable of holding his own in a fight – but, despite his worsening health, he still exudes an invincibility of character.

Curl doesn’t feature as much in the novel as one might expect – it’s difficult to assume the woman on the cover is anyone but Curl. She quickly fills out as a character as she decides to take charge of her life in an unexpected way, and her actions towards the end of the novel have important repercussions for another key player. Buchanan gives us a brief, well-integrated backstory for Curl, telling us how she got to Bar-Khos, and her fall from grace. An interesting character, for sure, but perhaps one that could have been used more (her presence is still not considerable after we are properly introduced to her). Bahn, a military officer tired of the endless war, acts as an interesting foil to the more gifted and optimistic generals he works under. Bahn is instrumental in getting Bull back into service, and their lives cross paths a number of times in the novel. It is through Bahn’s and Bull’s eyes that we learn more of the Khosian’s military strategizing, and also the lengths to which people will go to protect homes, comrades, and their own lives.

Stands A Shadow has far grander action than Farlander, with the war between the Mannian Empire and those who oppose them escalating in the wake of the previous novel’s events. The battle scenes are intense and brilliantly written – the chaos, confusion and bloodshed expertly realised on the page, Buchanan writes some of the best battles I’ve read in fantasy. The author does not revel in the bloodshed, however, and only writes conflict when it serves the overall plot and story (which, admittedly, is still quite often). There are a couple of instances when the narrative actually skips conflict almost entirely, showing the reader only the preparations and the aftermath. When the action gets going, the novel is nigh-impossible to put down, and there are a couple of sections just after the mid-way mark that kept me reading well into the early hours of the morning because I just had to know what happened next – this includes the last 150 pages, which I read in one long, late sitting.

The war efforts of the two armies gives the reader a somewhat jaded impression of the ability of democracies – or, at the very least the type on display here – to get anything done properly, and a comparatively scary impression of the abilities of more autocratic states. There’s governmental gridlock, there’s the inability of “leaders” to actually lead or look beyond their own parochial needs and agendas. Meanwhile, the Mannians field a considerable army hungry for battle in very short order (admittedly, the many issues with the Mannian way of doing most things become apparent to Ash as he stalks the Matriarch). Lord Protector Creed of Bar-Khos has his war plans and supplies held hostage to the politicians’ total lack of understanding of the situation and also knowledge of how to respond to an invasion.

As mentioned at the start of the review, the first third of the novel seemed to move slower than I remembered being the case with Farlander, but this was no bad thing. It allows the reader to become reacquainted with the setting rather ably, before events and developments force greater momentum on the plot – I read through the second half at probably three times the speed, so insistent were the writing and plot. Buchanan’s writing remains tight and assured (indeed, it’s improved), with realistic dialogue and engaging characters throughout.

Stands A Shadow is a great fantasy novel, even better than the author’s debut, and quite addictive. Taking a close look at characters caught up in a global power struggle, we get a more personal view of the war, playing to the author’s strengths in characterisation. It is a novel that should appeal to all fans of the genre, and a series that is certainly a must-read, showing every indication that it will just get better and better.

On the strength of both Farlander and Stands a Shadow, I can only see Buchanan getting better with each new novel. If you like your fantasy grand in scope but intimate in detail and character-driven, then the Heart of the World series is perfect for you.

Engaging and addictive, Stands a Shadow is one of the best novels I’ve read this year, and therefore very highly recommended.

Also on CR: An interview with Col Buchanan

Posted by Civilian Reader at 11:35 AM