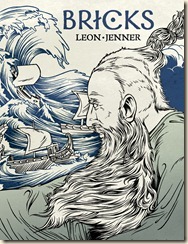 This is the story of a bricklayer. A master of his craft, he keeps its sacred teachings secret. For him a house is the dwelling place of a soul, and a house must be built in the right spirit or the soul inside it will suffer. The building of an arch is a ritual to obtain a right relation with the earth and a connection with the truth.

The bricklayer recalls his previous life as a Druid priest. He talks about the creation of the sacred landscape of these islands; how even a simple stick lying on the ground would tell people the direction they needed to go in; how when people stared at the stars, they were staring at their own mind. The reader sees the world through the eyes of this great, magical being at the time of the Roman invasion, and learns how he tricked Julius Caesar and set in train the series of events that would lead to Caesar's assassination on the Ides of March.

But as the bricklayer continues, he worries he is losing his ancient, sacred powers. The vision begins to fray at the edges as we learn how he has recently taken violent revenge on yobs who have mocked him. Is he really connected to a once living Druid priest, or is he gradually losing himself in his own fantasies?

Despite it’s gorgeous artwork, and clearly high-level production, I just don’t know what to make of this book. Part fantasy, part historical fiction, part commentary on society, it may just be too short to really do what it wanted to do.

One thing I should state from the outset – this is not the sort of book I would normally read. However, after a string of fantasy reads, I thought this might be different enough to act as a palate cleanser. [Given the short length of the book, I shall keep my review equally short, to avoid giving spoilers.]

Jenner writes in a good style, one that is well-paced and interesting. There are a couple of well-placed, whimsical asides and comments, too, which save this from being a completely dry novel. My main issue with Jenner’s style is that I just didn’t really connect with the narrator or the story. As I mentioned above, maybe it was just too short to fully achieve what it meant to achieve? The commentary is clunky and blatant – it lacks the finesse of other authors who sprinkle commentary on contemporary society and politics into their work, and it felt a little simplistic. The prose appears stripped down to its bare minimum, at the expense of delving deeper. The poems are… well, not to my taste. Some will criticise this as being quite ‘hippy’, given the author’s obvious affection for Britain and its history, and his disappointment in the way society has developed over recent decades.

The final chapter sheds all pretence of being fiction and just states explicitly that the “economic way… stifles the flow of life”, and has sapped beauty from the world. This is all well and good, but by now it is also pretty boilerplate commentary. I may have missed the ‘point’ of this book, and I’ll admit to having been intrigued by the idea of learning how this particular druid tricked Julius Caesar to set in motion the events that led to his assassination… but again, not enough is here.

Despite the eye-catching, Hokusai-influenced cover artwork (which actually is quite lovely), and the nicely-put-together book, this just didn’t do it for me. If I had the opportunity to make suggestions to the author and/or publisher, I would have recommended this was made longer, and that more story was added. Maybe I’ve just got used to longer novels (400+ pages), where characters and so forth are developed, worlds fully realised, events described, and commentary better integrated into the story. Given that part of this is based on an audio download that received 250,000 listeners, I can see why the publisher was interested in publishing this as a book. However, I think the transition to print has not been quite as successful as one could hope.

Ultimately, I recommend waiting for this in paperback, unless you’re curious to read something really different. The story itself is only 105 pages (followed by some appendices), which certainly does lend itself to a lazy weekend read, and it’s also quite original (even if the underlying message is rather blunt and lacks finesse).

As the lede says, a strange little book.