Just another quick artwork post (there are some really nice pieces of work being released recently, so I’ve decided to take the opportunity to share them).

T.C. McCarthy’s debut novel, Germline has only just come off the presses (it’s released next month), but Orbit have pre-empted the release by showing us the artwork for the author’s second novel, Exogene (both novels are part of McCarthy’s Subterrene War series).

Here’s the striking artwork and also the blurb for the novel: 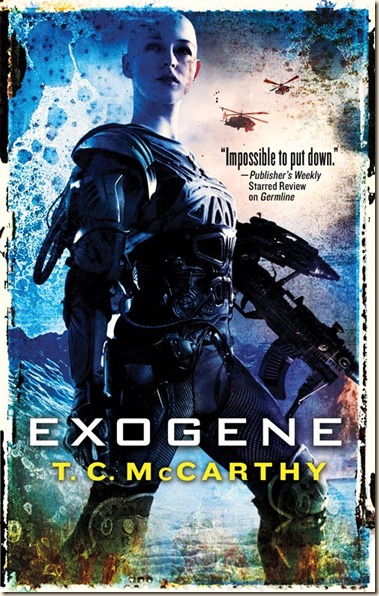 Exogene (n.): factor or agent (as a disease-producing organism) from outside the organism or system. Also: classified Russian program to merge proto-humanoids with powered armour systems (slang).

Catherine is a soldier. Fast, strong, lethal, she is the ultimate in military technology. A monster in the body of an eighteen year old girl. Bred by scientists, grown in vats, indoctrinated by the government, she and her sisters will win this war, no matter the cost.

And the costs are high. Their life span is short; as they age they become unstable and they undergo a process called the spoiling. On their eighteenth birthday they are discharged—lined up and shot like cattle.

But the truth is, Catherine and her sisters may not be strictly human, but they’re not animals. They can twist their genomes and teach them to follow the principles of Faith and Death, but they can’t shut off the voice inside that wants more than war. Catherine may have only known death, but she dreams of life and she will get it at any cost.

I think this sci-fi series sounds pretty interesting and right up my street. Early reviews that I’ve spotted around the internet have thus-far been strong and full of praise, which has only increased my impatience to read it. Germline is one of my most-anticipated novels of the year, so expect it to be reviewed as soon as possible.

Want to know more about McCarthy and his novels? Check out my INTERVIEW with the author, and also visit his blog for more.

[Thanks due to LEC Book Reviews, where I saw the artwork first.]

Posted by Civilian Reader at 6:42 PM