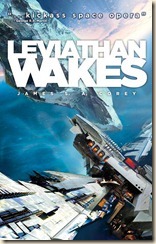 Humanity has colonized the planets – interstellar travel is still beyond our reach, but the solar system has become a dense network of colonies. But there are tensions – the mineral-rich outer planets resent their dependence on Earth and Mars and the political and military clout they wield over the Belt and beyond.

Now, when Captain Jim Holden’s ice miner stumbles across a derelict, abandoned ship, he uncovers a secret that threatens to throw the entire system into war. Attacked by a stealth ship belonging to the Mars fleet, Holden must find a way to uncover the motives behind the attack, stop a war and find the truth behind a vast conspiracy that threatens the entire human race.

A collaborative effort between Daniel Abraham and Ty Franck, Leviathan Wakes is a brilliantly readable, gripping from start to finish, and a superb start to a new series. I was hooked from very early on, and eager for more at the end.

Leviathan Wakes brings together a disparate cast of characters, unwittingly thrown into the centre of a system-wide conspiracy. Belter Cop Miller’s life is complicated by a missing person’s case he receives on the side, searching for the wayward daughter of a wealthy Inner System family. The case brings him into contact with Captain Holden and his crew, who have been suffering one setback after another, following the destruction of their ice mining vessel. Holden’s actions in response to the attack and what they find on the abandoned ship places them squarely in the sights of all the various factions in the Solar System. The miners experience an almost ping-pong existence, as they search for safety and a new place in the changing environment, finding support from a surprising faction in the end. As war breaks out, and events spiral out of control, our heroes all must choose a side. These events and more come crashing together as a wider threat and conspiracy is slowly revealed, and the stakes continue to rise for our unwitting heroes.

The brewing intergalactic conflict (which Holden seems to have unwittingly caused and exacerbated on two separate occasions) makes for a tense backdrop to the novel. Holden’s “righteousness” seems to lead him to make poor or ill-thought-through decisions. Holden and Miller have a strange relationship in this novel, once they finally meet up – each seems to hold the position of moderator of the other at different times. For example, Miller holds Holden back from making any more public mistakes, while Holden struggles to halt Miller’s increasing instability – a result of Miller’s case, which has revealed that he is a little broken on the inside, and also hurt by the realisation that he is considered washed-up by his colleagues.

The other characters in the novel – from Holden’s crew members to peripheral, fleeting guests in our heroes’ lives – are well-rounded and interesting, as well as varied and realistic: the Belter teenagers who are chomping at the bit for some violent action; the older, more reserved Belters; and the Inner-System inhabitants of Belt colonies, who struggle with a lifetime of considering Belters as inferior, only to now find themselves at the bottom of the ladder. Miller’s partner, Havelock in particular is frustrated when tensions on Ceres (the colony Miller hails from) move from simmering to boiling over, and his colleagues lose all faith and trust in him purely because he is not a native. Among Holden’s crew, we get to see a nice variety of characters meshing, in a last-remaining bubble that doesn’t see race as an issue. Holden and Amos are from Earth, while Naomi and Alex are Belters. There’s an interesting scene in their ship’s galley, when Amos – who is basically a belter by nature, temperament and everything else except physiology – struggles to accept how racist Earthers are, which highlights both how unique this crew is and also how close-knit they are, having become effectively a family. It’s almost like the camaraderie and dynamic aboard Serenity in Firefly.

An interesting element of this future is the continued racism of humanity. It appears as though certain levels of racism have been usurped by newer types – there’s really nothing like the human race for finding new ways to categorise people, and then develop prejudices between the new categories. In this future, the racism is based on whether or not you are from the outer colonies or from Earth and Mars (although, there exists just as much animosity between those two planets, too). This is only heightened due to the centuries-long process of adaptation of the Belters to lower gravities, which have made them taller and thinner, and arguably different to the Earth and Mars natives. This tension and conflict may also contain a little commentary on the Periphery-vs-Centre tensions and frustrations of modern day society – where those living near the wealthier regions enjoy better amenities and quality of life, oblivious of the struggles of those who live further away from the centres of power and industry, and live under much more difficult circumstances.

The novel is really addictive and gripping throughout, although the plot did not move at quite the pace I had expected. It’s quite a slow-burn, although the novel is not without action and some pretty intense chapters and scenes. The authors’ prose is very fluid, the characters’ dialogue very natural, and the narrative flow is just very, very good. I was so quickly hooked by the story and characters that the pacing didn’t bother me in the least. Corey doesn’t overload us with exposition or reams of description – in fact, he keeps things pretty light on explanation, allowing events and dialogue to fill in our understanding of this future. The science is believable and not too outlandish, but neither is it particularly ideal – long-distance space-travel is uncomfortable if you want speed, and life is not easy for the majority of people – certainly not the Belters. I also liked that Corey paid close attention to timing in the novel – the considerable amount of time it takes to travel between planets and colonies, and how this can effect a war across the solar system. It made for some interesting calculations on the characters’ part, and also the occasional adjustment for how much time has passed between events. The villains of the piece, when they are finally revealed, are pretty awful, too, totally devoid of humanity with a particularly chilling agenda.

All the elements of this novel come together in a wonderful sci-fi melange that is addictive, entertaining and engaging, and Leviathan Wakes is certainly one of the best sci-fi novels I’ve ever read. I will be an avid follower of the series, for sure, and can’t wait to read the next instalment and see what else the authors have to offer.

Reading Leviathan Wakes reminded me of the first time I read Richard Morgan’s Altered Carbon all those years ago (2002, I think – it was my first non-tie-in science fiction read), that thrill of futuristic discovery and mystery. Only this time, I think, Leviathan Wakes is much more accessible. Really superb sci-fi, this will probably be the novel I recommend to anyone wanting to dip their toe in the genre for the first time.