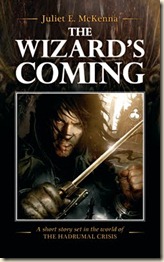 Prelude to The Hadrumal Crisis

“Captain!” Hosh’s shriek startled everyone. Up on the cliff edge, he was hopping from foot to foot, pointing out towards the distant horizon. “The wizard! The wizard’s coming!”

This was the first fiction I’ve ever read by Juliet McKenna, so I had no clue what to expect. I have a mixed opinion of this short story (offered free by Solaris), but I’m certainly intrigued to read more of these characters and this world.

The eBook starts off with a note from the author about this story and where the idea came from, somewhat locating it in the context of her other novels set in this world. McKenna also mentions that she intended the novella to work

“as a taster for those who are curious about my writing but who wonder if they really can step into this world without having read all my earlier books. Hopefully they’ll discover they can.”

This meant someone like me, so I took up the challenge…

And was a little lost to begin with. The first half of the story was rather busy, and it wasn’t entirely clear to me what mattered and what didn’t, as there didn’t seem to be much related to the author’s introduction (maybe it would have served better at the end of the story?). There were lots of names to get to grips with, a scramble as these characters flee from a sighting off the coast, followed by some further troubles and some assassinations, and then we arrive at a local lord’s hall as a corsair spokesperson attempts to shake down the locals. This is when the story started getting interesting.

Overall, McKenna’s writing is very good, and quite atmospheric, while avoiding any pitfall that ensnares many, more florid fantasy authors. The first half, as I mention above, is a little busy and therefore didn’t quite flow as well as it could have – perhaps it’s a result of the short story format – but in the second half, things  really picked up and I was quite taken with the world and writing. This, incidentally, is when the wizard has arrived. He was easily the most interesting character here, despite a lot of unanswered questions and the sparse detail. It was also nice to discover that not everyone knows much about magic, and the locals were almost as in the dark as I was. Minelas, the wizard, had to point out a couple of times the limitations of his abilities to the locals who had hired him to rid them of the corsairs that have been raiding virtually unopposed in recent months.

Minelas is also utterly pragmatic and realistic, a good foil to his employer’s sometimes idealistic and moral concerns – for example, concern that driving the corsairs from this land would just lead them to raid its neighbours:

“My magic and your men can destroy this nest of vermin. That’ll send a message to the other corsairs.”

“Telling them to raid our neighbours instead,” Halferan said unwillingly.

“Your duty is to your own... We can help your neighbours as and when raiding ships come.”

As things turn out, Minelas is far more realistic than even his employers imagined.

This looks to be a particularly dark and interesting world that McKenna has created. The novella would, in my opinion, probably be more rewarding for those who are familiar with the author’s previous novels set in this world. Without any existing knowledge, it felt a tad unfinished, as there wasn’t much chance to establish the world, its magic system and so forth. There are hints of far greater things to come in the final scene, though, which certainly whets the appetite to learn more.

I remember receiving, I think, one of the later books set in this world – perhaps the last volume in McKenna’s previous trilogy – but without reading any of the preceding novels, it was sent to the bottom of the pile (it’s never easy or good, in my experience, to jump into a series so late). Now, I’m wishing I’d made much more effort to read McKenna’s work, as well as seek out the earlier titles – even if I only gave the first book a chance. I’m glad I’ve now rectified this (in part), and will be eagerly awaiting more set in this world. My first trip will be to Amazon to see if her novels are available as Kindle editions, and I will try to squeeze a read in as soon as I can. If the novel that follows on from this story appears first, then I may read that next, but I would certainly be interested to have a more full impression of this world and how it works.

Very promising for the full series that’s on its way, and an interesting introduction to the author’s writing and world. However, it was an introduction that did not offer as full a picture as one might like. If you are familiar with the series, you’ll no doubt love it, but if you’re like me, you might be left wanting a little more. Which is actually a good thing, as there are more novels already available.

The Wizard’s Coming will be followed by Dangerous Waters, which will be published by Solaris in August 2011.

Here’s the artwork (by Clint Langley), and also the synopsis: 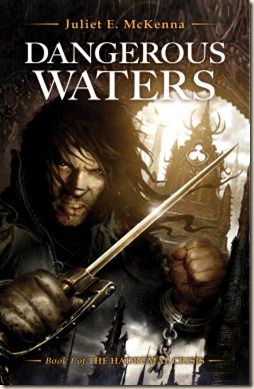 Posted by Civilian Reader at 10:11 PM