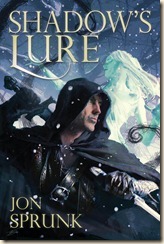 The Unforgiving Northlands… In Othir, he was at the top of the food chain – an assassin beyond compare, a dark shadow in the night. But Caim left that life behind when he helped an empress claim her throne. And now his past has come calling again.

Searching for the truth behind the murder and disappearance of his parents, Caim discovers a land in thrall to the Shadow. Haunted by temptations from the Other Side, he becomes mired in a war he does not want to fight.

But there are some things a son of the Shadow cannot ignore, and some fights from which he can’t run. In this battle, all of Caim’s strength and skill won’t be enough.

For none can resist the Shadow’s Lure.

As with Sprunk’s debut, I find myself in the position of having to review a book which I thoroughly enjoyed and not wanting to sound like a frothing fan-boy. I shall, nonetheless, do my best to properly review the novel.

In this second novel, Sprunk offers readers everything on a grander scale. Caim has left the city at the centre of events in Shadow’s Son, and has embarked on a personal mission. Through his eyes, we are given more information on the world in which he lives and bucket-loads of action and adventure. Shadow’s Lure did not disappoint, and shows welcome growth in an author who was already clearly talented.

First up, and something that is clear from the very first chapters, is that Shadow’s Lure is written on a wider canvas than the first novel – the scale is simply bigger, and it really works. Sprunk’s debut was both refreshingly and frustratingly short on world-building, but in Shadow’s Lure the author has allowed Caim’s personal mission and also the wider events taking place in this world to add more to the reader’s understanding and picture of this world. Caim’s travels take him further afield, to the North, a land very different to that we (and Caim himself) are familiar with, and we see the contours and details of this world filled out. It’s done extremely well. The characters that populate the different regions and cities are colourful and varied, and never boring. The people are tougher, more suspicious of outsiders and Caim struggles repeatedly to prove that he is not a Southern spy sent to destroy these peoples’ way of life. In addition, he battles with the temptations of the Shadow that he can draw on during combat: it imbues him with considerable abilities, but comes with a bloodlust that can be overwhelming. He’s not squeamish about the fact that he’s a professional assassin, and thankfully isn’t prone to long moments of introspection or self-evaluation. He’s far more pragmatic about his skills and abilities, although he does not revel in them. He’s a nicely rounded character, in other words, and is very believable.

Caim’s story is one of adventure, intrigue, and accidental involvement in grand-yet-struggling insurrections. Along his travels, he becomes embroiled in an absolute ton of action, which is when Sprunk’s writing truly shines: battle scenes are fast-paced, messy, and don’t always turn out how the reader expects or wants. In addition, and this is something that really stood out for me, the battles, duels and brawls are not all the same – too often, with some authors, you read one fight scene and you’ve read them all. Sprunk keeps things interesting and fresh throughout, as well as keeping tally of Caim’s and other’s injuries which effect their abilities later in the novel. In other words, this novel is full of all the good stuff that we know and love from the fantasy genre.

Kit, Caim’s peculiar spirit-guide, comes into some trouble, also, as she is wrenched from his side and must fight her way back to the real world to rejoin Caim and help him in his quest. This was an interesting and welcome decision from Sprunk, as it allowed for more of the Shadow and different realms to be explained. It was also, at times, rather creepy.

Newly-crowned Empress Josey still features in the novel, but not as prominently as Caim. Sadly, she is still not as interesting as Caim or his story, either. Whenever we switch to Josey’s perspective, the momentum drops a little, which is disappointing because of the sheer brilliance and entertainment of Caim’s plot thread, and also Kit’s more eerie troubles. Josey is just not as strong a character as our hero, and not as convincing. I don’t think I’d be wrong in guessing that Sprunk enjoyed writing Caim’s story more. That being said, Josey’s life is more interesting now that she’s Empress, and we get to know a little more about the factionalism of court politics and her struggles to get to grips with those courtiers who are more loyal to the deposed regime, and also the increased civic unrest in Othir that comes from toppling a religious regime. In addition to this, there are some dark goings-on about the palace caused by an enigmatic assassin and assistance from an unexpected stranger. Josey remains quite naïve and also just a tad weak, though, which made her a little less convincing in her new role as Empress (she’s a little too Liberal- and idealistic-seeming for these times, perhaps?). As readers draw ever-closer to the end of the novel, however, it becomes more clear that Josey’s story and situation is meant to be quite different to Caim’s, and it actually finishes on an atmospheric hunt for the assassin that had a very good slow-burning fuse.

The overall tone of the novel is quite dark, as the forces Caim can summon as well as those working behind the scenes in both the North and South of the world are sinister and brutal. This novel is not Abercrombie-gritty, but neither is it afraid of getting its literary hands dirty. The pace is superb, and both the premise and characters are engaging, entertaining, and almost all are very well crafted.

Sprunk has written quite a stirring final act, as Caim accepts the realities presented to him, taking up a burden he never wanted. It follows a long stretch of brutal action and warfare, in which Sprunk never lets the pace slow, keeping the story ploughing forwards and pulling the reader on to the very end.

Shadow’s Lure features much-improved writing, plotting and characterisation; and it builds on an already confident and assured style. In other words, it’s an improvement in every way.

This is great fantasy, filled with action and adventure, balanced by a dark sensibility that is addictive and engaging. Very highly recommended. If you haven’t tried Sprunk’s work yet, then I strongly suggest you rectify this as soon as possible.

Shadow’s Lure is published by Pyr Books in the US and Gollancz in the UK. Here’s the UK artwork: 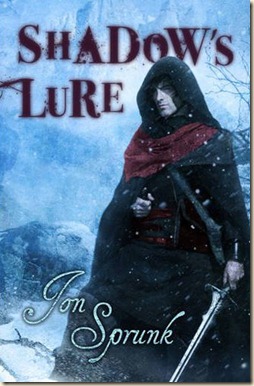