As I will be effectively homeless in a couple of months, shifting from the rather stable, safe life of a postgraduate to effectively a vagrant for a couple months while I search for jobs, I find myself confronted with the unfortunate necessity of having to give away a lot of books.

With the proliferation of eBooks and eReaders, this is no longer the absolute disaster it once was, as I will be able to replace many of these books with eBook editions (which I can then also take on my travels – which is a double win!).

Rather than just give the books away to charity, I thought I would offer them instead as giveaways to readers of Civilian-Reader. I’ll be creating a few bundles, each linked by a theme, and posting a competition maybe once a week (possibly once every two weeks).

So, for this first giveaway, I give you Warhammer 40,000 fiction, published by Black Library: 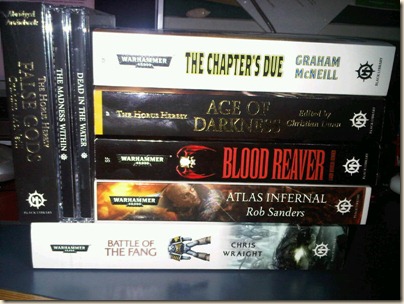 These are the copies that I read, so there may be some minor creasing on the spines or shelf-wear, but the books are otherwise in pristine condition (I’m very protective over books). Here’s what they are:

- Aaron Dembski-Bowden’s Blood Reaver – easily one of the best novels of the year.

- Age of Darkness, the most recent anthology of Horus Heresy fiction, and another stellar release.

- Chris Wraight’s Battle of the Fang – a very satisfying Space Marine Battles novel, which continues the story of the Space Wolves-Thousand Sons feud.

- Rob Sanders’s Atlas Infernal – second novel from this up-and-coming author, delves into the workings of the Inquisition and the forces of Chaos.

- Graham McNeill’s The Chapter’s Due – the latest Uriel Ventris novel from one of Black Library’s most prolific and gifted authors.

- Steve Lyon’s The Madness Within – a Crimson Fists audio drama.

To get your hands on all of these books, all you have to do is send your name and address to civilian.reader[at]hotmail.co.uk by midnight Wednesday 6th July. The lucky winner will be picked at random next Thursday. [Only one entry per person, but if you follow the blog on either Facebook or on Blogger Follow, you will get an extra entry, increasing your chances to win.]

Unfortunately, this giveaway is limited to EUROPE residents only. Apologies to our other readers from further afield.

[For smaller giveaways, I’ll try to keep them open to Europe and the USA/Canada.]

Posted by Civilian Reader at 4:02 PM

Email ThisBlogThis!Share to TwitterShare to FacebookShare to Pinterest
Labels: An Aside, Black Library, Competition, Giveaway