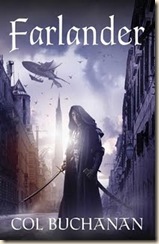 An excellent debut fantasy, from an exciting new voice in the genre

The Heart of the World is a land in strife. For fifty years the Holy Empire of Mann, an empire and religion born from a nihilistic urban cult, has been conquering nation after nation. Their leader, Holy Matriarch Sasheen, ruthlessly maintains control through her Diplomats, priests trained as subtle predators.

The Mercian Free Ports are the only confederacy yet to fall. Their only land link to the southern continent, a long and narrow isthmus, is protected by the city of Bar-Khos. For ten years now, the great southern walls of Bar-Khos have been besieged by the Imperial Fourth Army.

Ash is a member of an elite group of assassins, the Rōshun, who offer protection through the threat of vendetta. Forced by his ailing health to take on an apprentice, he chooses Nico, a young man living in the besieged city of Bar-Khos. At the time, Nico is hungry, desperate, and alone in a city that finds itself teetering on the brink.

When the Holy Matriarch’s son deliberately murders a woman under the protection of the Rōshun; he forces the sect to seek his life in retribution. As Ash and his young apprentice set out to fulfil the Rōshun orders – their journey takes them into the heart of the conflict between the Empire and the Free Ports… into bloodshed and death.

The quality of Buchanan’s writing is nearly peerless. He writes almost as well as long-established authors like Kevin J. Anderson (indeed, Farlander reminded me of Anderson’s The Edge of the World), and certainly matches up to the new breed of top fantasy authors such as Scott Lynch.

Buchanan’s true gift is his ability to give each of his protagonists a unique voice, while retaining a cohesion and flow to the novel. While certain characters’ perspectives need a change of pace (specifically Kirkus, as his world needs a lot more explanation and detail), there’s little negative effect on the flow of the novel. To be fair, Nico’s training at the mountain retreat of the Rōshun is not exactly breathless, but the personal rivalries and internal politics are well-presented and interestingly portrayed (this is true also for the Mannians). The development of the relationship between Nico and Ash is interesting; at times, Ash acts aloof and cold towards his apprentice, while at others he treats him almost like a son (for example, when he tries to teach Nico how to read poetry).

The Holy Order of Mann (the oppressive imperialists in this world), the antagonists of the novel, are brutal and depraved religious fanatics. They worship the flesh, take part in plenty of taboo acts, and there’s a certain psycho-sexual component to their violence. This certainly comes across in the first proper introduction to the sect and Kirkus, as he tours the Empire. Their violent entrance to Skara-Brae (a city that is already compliant with the Order), and again in the Governor’s mansion – which leads to the unfortunate death of the Rōshun’s protectee. For some reason, they remind me of the Persian’s in Frank Miller’s 300. The Holy Order also inform Ash’s worldview, and his negative opinion on the effects of religion, which he lays out for Nico, in Q’os:

“It is our way in this world… to pretend that our beliefs mean everything to us. But wars are seldom fought over beliefs. Wars are fought for land and spoils, for prestige, for foolishness. They are fought because one side wishes dominion over another… The Mannians are no different, despite appearances. Dominion is their deepest creed. At heart, they desire to rule all things.” [p.249]

The followers of Mann, indulgent and vulgar, are the polar opposite to the Rōshun, who are warrior-monks with an almost Buddhist calm about them (despite their role as executors of vendetta), focussed as much on the art of stillness as they are the art of the blade and clean kill, taught compassion as well as death.

This year there have been a surprising number of “hot-tipped” new authors. Mr Buchanan is one of these authors, and while many of them have been pretty good, he might just be the first I’ve considered great: he doesn’t fall for cringe-worthy fantasy clichés and tropes, you feel quickly at home in this new world, and you will grow to care for his characters, which are drawn from a diverse and well-rounded and -realised cast. Not everyone’s motives are clear-cut, and Buchanan sometimes throws in bluffs and double-bluffs to keep us guessing for a while (as in the case of Ché).

To be honest, this is a really difficult review to write. I started to love this novel very quickly, finding myself swept up by Buchanan’s prose and the story, becoming immersed in the tale each and every time I picked up the book (it was only due to other commitments that I didn’t read this in one or two sittings). It’s not the fastest novel (the murder mentioned above happens just under half way through the novel, for example), with events unfolding calmly and without too much haste, but you will certainly find yourself sinking into the narrative as Nico’s new life as an apprentice Rōshun and Kirkus’s life as heir apparent to the Mann Empire, along with all this entails, unfold on the pages before you.

If you are a fan of fantasy, then Farlander is a novel you should go out immediately and buy. Gripping, decent action, and an inspiring new talent, Farlander is the beginning of something special.

Farlander is released in the UK on March 5th, and can be pre-ordered here