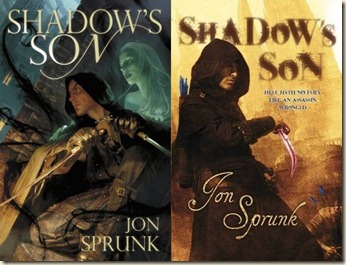 One of this year’s hotly-tipped debut fantasy

Treachery and corruption lurk at the end of every street, in the holy city of Othir. It’s the perfect place for a freelance assassin with no loyalties and even fewer scruples.

Caim makes – or, perhaps more accurately, takes – his living on the edge of a blade. Murder is a risky business, but so far he reckons he’s on the right side of it. Or he was... because when a short-notice contract job goes south, Caim finds himself thrust into the middle of a sinister plot in which he seems to be one of the primary marks.

Pitted against crooked lawmen, rival killers and the darkest kinds of sorcery, it’s going to take more than luck if he’s to get through this alive. He may lack scruples, but he’s still got his knives and instincts to rely on; not to mention a well-developed sense of revenge to fall back on.

But when his path leads him from the hazardous back streets of Othir and into the highest halls of power, will instincts and weapons alone be enough? If Caim is really going to unravel the plot which has snared him, to unmask a conspiracy at the heart of the empire, he will have to finally claim his birthright as the Shadow’s Son...

I’ve been waiting a long time for this. Naturally, this made me rather cautious when approaching the novel. Thankfully, I really enjoyed it. Unfortunately, this presented me with the usual problems of reviewing a book I really like: how not to sound like a dribbling fan-boy?

There’s no need to go into the story in any great detail (the synopsis, after all, is above), so I’ll just dive straight into my observations: One of the most original and interesting elements in Shadow’s Son, is the inclusion of Kit – Caim’s personal ghost. It’s not entirely clear to Caim what or who she is, but she’s always been with him, helping him (more so since he became an assassin), and providing companionship – and occasionally acting like the less-idealistic half of his conscience. She flits in and out of Caim’s company, never entirely dependable but when it truly matters, she appears to lend her support – in any way possible – the our embattled hero.

Caim is a classic, taciturn, lone-wolf protagonist (perfect for this genre), though with more layers than might be expected from a lesser-talented author. Some might complain that he’s a cliché, but if he is, then it’s in a good way. His interactions with those around him are realistic, and especially interesting with Kit, who comes across as emotional and highly sensitive, but devoted to Caim. Josey bothered me a little – her entire manner frequently annoyed me, as she came across as having an affected aristocratic air with a rather literary waif-ness about her (even some of her dialogue read like it was ripped out of a ‘Victorian Maiden’s Handbook’). I was disappointed that she wasn’t made a stronger character, and that almost as much of the book was written from her perspective as from Caim’s, but she served her purpose well. Her reaction and subsequent comportment following a certain event about two-thirds of the way through the book was not quite as layered or nuanced as I would have liked; she seemed to consider it a trifle annoying… (I’m not going to spoil it for you – read the book!)

The world Sprunk has created is also well-crafted: classic, sprawling cities with a simmering class-struggle underneath the surface, surrounded by untamed wilderness. As the novel unfolds, the author does a good job of revealing more detail of the locales, the population, and the politics of his world – as well as laying some breadcrumb-like hints about supernatural forces of his world (which I hope will be fleshed out in subsequent novels). The overall feel is rather dark and dangerous, with a great magic system surrounding light and dark, but without being so delineated in terms of which is ‘good’ and ‘bad’; Caim’s powers, in particular – at once useful, frightening, unpredictable, and largely a mystery to him – provide interesting and intriguing danger to his life and profession.

All that being said, I think I would have liked a bit more – Sprunk’s descriptions and exposition are very sparse, which won’t offer much to fantasy readers who love world-building and grand inventions.

The events of the novel all take place in a short time – a couple of days, it seems – which makes some developments a little over-quick (Caim’s affections for Josey, for example), but also limited how much Sprunk could get done in the novel. The story is brisk and the dialogue doesn’t suffer from cliché, but I do think the novel could have been longer – I don’t feel like I’ve got to know Caim as well as I would have liked, given this is the beginning of at least a trilogy (Shadow’s Lure and Shadow’s Master are on their way). It doesn’t feel rushed or incomplete, just… I’m not sure, actually. The length and pace of the novel lend themselves well to a great, fun read, but at the expense of some extra character development and needed exposition: I didn’t really get a proper feel for the Caim-Ral rivalry, or really why Caim’s considered the most deadly and feared assassin in Othir. I appreciate that the author didn’t over-write (a major failing for some fantasy authors), but in this instance I wonder if he might be guilty of under-writing?

This being said, while the decision to keep the novel short (less than 300 pages) could have been a devastating decision, I also think the novel benefitted from the author’s brevity in one important way: by not descending into considerable tracts of exposition and world-building, Sprunk was able to write a novel that places the onus on the reader to round out one’s impression of the world. Shadow’s Son, therefore, is written much like a thriller, and instead of spelling everything out for the reader, allows them to form a lot of the picture themselves – no bad thing.

Ultimately these minor issues didn’t detract from my enjoyment of the novel – the pace is great, the story fun and engaging, and the characters are interesting. This is a solid fantasy debut that grabs you from page one and refuses to let you go. I am eagerly awaiting the second instalment.

To sum up, I shall not mince words: I really liked this novel, and had fun reading it; and I think most readers will, too.

Shadow’s Son is released in the US through Pyr/Prometheus (who very kindly sent me the book to review) and is published in the UK by Gollancz.