A Quick Comment on the Gemmell Award Shortlists, and One of the Nominees. Sort of…

This post is a bit of a break from the norm for me. I’m also not really sure what it’s meant to do. It’s a bit waffley, for which I apologise only slightly, and in not entirely a heartfelt manner. Fiction awards mean very little to me, being neither author, editor, publisher, nor agent. (At least, not yet…) This means I have never (to my recollection) written a post of any worth/note about shortlists or winners. 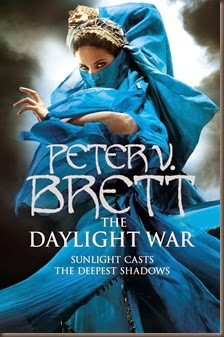 Award lists tend to pass me by without comment or thought. Invariably, this is because there aren’t any books featured that I’ve read – or, if there is, it is one that didn’t leave much of an impression one way or another. This year has been a bit different, however. For example, Kameron Hurley’s God’s War has been cropping up on a few shortlists, and it’s a book I rather enjoyed. So that made a nice change.

The shortlists for the Gemmell Awards were announced today at Eastercon. In a real break from the norm, the shortlist for the Legend Award (best fantasy) features not only five authors I have read, but also a book I feel particularly strongly about. So I thought I’d write a quick blog post about it. The book in question is Peter V. Brett’s The Daylight War, the third in his Demon Cycle series.

[Before I continue, let me just state that my focus on this book is not an indictment of the other authors nominated for the award. I just feel particularly strongly about this one. The other Legend nominees – Mark Lawrence, Scott Lynch, Adrian Tchaikovsky, and Brandon Sanderson – are great authors, too, whose works I have enjoyed very much. I just haven’t read their nominated novels.]

I’ve been experiencing a phase of fantasy disenchantment, lately. In fact, looking back over the past year or so, I’ve read far less (epic) fantasy than I would have expected. I have picked up and discarded more fantasy novels than I usually do, too. I just can’t get into anything, nor can I rustle up the enthusiasm to sit through hefty tomes. 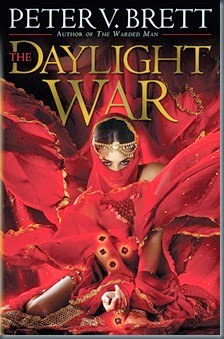 There is one clear exception to that, though, and that’s Brett’s series. Every time I think about reading a fantasy novel, I find myself wistfully wishing that the next novel in the Demon Cycle was already available. This is because there are very few authors who do it better. That’s not to say other fantasists writing today aren’t good, or are lacking in talent – far from it. But, really, I think the only epic fantasy series I would happily drop everything to read the next book in, is the Demon Cycle. Everything about the novels just works for me – the story, prose, characters… everything. I don’t think, across the three novels published so far, I’ve come across anything that gave me pause. I read the first, The Painted Man, in three sittings – the final sitting a 300-page marathon, which I finished at 4am. I read the second and third novels back-to-back (something I rarely do), eschewing everything else – true, I was unemployed at the time, and had little else to do; but nevertheless, all I wanted to do was read the books.

I haven’t experienced that level of Reading Insistence since I read Scott Lynch’s The Lies of Locke Lamora – the book that got me back into reading fantasy in the first place (as I think I’ve mentioned ad infinitum on the blog). In the case of Lynch’s series, I went straight out and bought Red Seas Under Red Skies when I was only two-thirds of the way through the first book – I even didn’t mind that it was the (frankly ghastly) shiny red-covered edition. Since then, and given the understandable delay before the third book came out, I have been almost afraid to go back and re-read the series to catch up.

Oh actually, that’s not entirely true – I was also incredibly impatient about getting hold of Brent Weeks’s Night Angel Trilogy. I must have pestered the Orbit publicist to the point of irritation, requesting the final two books… I was also really late to Abercrombie’s First Law trilogy, and I do consider Before They Are Hanged to be one of my favourite novels.

Regardless, the point I’m trying to make is that very few epic fantasy novels have really grabbed hold of my imagination and attention. And, I think, none more so than Brett’s Demon Cycle.

So, to bring this ramble back around to the topic at hand, I really hope The Daylight War wins the Legend Award.

Peter V. Brett’s The Daylight War is published in the UK by Voyager, and in the US by Del Rey. The first two volumes in the series – The Painted Man (UK)/The Warded Man (US) and The Desert Spear are published by the same publishers. Two novellas have also been collected into a single volume: The Great Bazaar and Brayan’s Gold. If you haven’t read them yet, and have any interest in fantasy, then I could not recommend them enough. You won’t regret reading them, I’m sure.

My reviews of the books: The Painted Man, The Desert Spear, The Daylight War and The Great Bazaar and Brayan’s Gold.

Regarding the Other Shortlists…

For the Morning Star category (best debut), I really enjoyed Brian McClellan’s Promise of Blood – it is also the only novel on the shortlist I’ve read.

In the Ravenheart category (best artwork), I actually like them all, and quite a lot. But I don’t understand why any of the covers for Elizabeth Bear’s Eternal Sky fantasy trilogy didn’t make it onto the final list… (I haven’t read any of the novels, but I want to, and those covers are frankly stunning.)