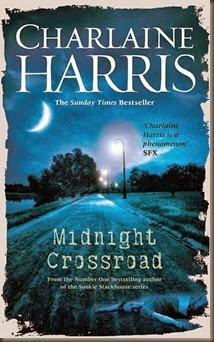 A great start to a new series

Welcome to Midnight, Texas, a town with many boarded-up windows and few full-time inhabitants, located at the crossing of Witch Light Road and Davy Road. It's a pretty standard dried-up western town.

There’s a pawnshop (someone lives in the basement and is seen only at night). There’s a diner (people who are just passing through tend not to linger). And there’s new resident Manfred Bernardo, who thinks he’s found the perfect place to work in private (and who has secrets of his own).

Stop at the one traffic light in town, and everything looks normal. Stay awhile, and learn the truth…

This is the first novel of Harris’s that I’ve read, and I must say I rather enjoyed it. A gently-paced mystery, with a supernatural slant, and populated by endearing, varied and well-constructed characters.

The novel started pretty slowly, for me. For the first 50 pages or so, it felt like Harris was intent on painting as complete and full a picture of Midnight, Texas. Everything was described, at length, and I worried that this was a sign of padding. Thankfully, the story then kicked in, and what followed was an engaging small-town mystery.

A disappearance and death from years ago is dragged into the present, stirring up earlier suspicions and far-reaching animosities. It also brings Midnight to the attention of a number of unsavoury elements, all of which are pursuing their own agendas. A new discovery leads Manfred and a select few of his fellow Mightnighters to investigate. In some ways, Midnight Crossroad feels like an established series, as some of the characters’ actions need to be taken with a pinch of salt – they are far more accepting of certain things than one might expect (the vigilantism, for example, not to mention some of the odder characteristics of certain Midnighters). 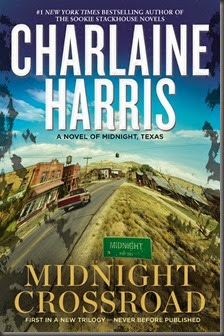 Each of the town’s inhabitants has their own secrets, and it is considered very bad form to pry. That each and every one of them has secrets, though, is an accepted fact. This has led to the creation a surprisingly close-knit community, despite none of the characters truly knowing the others. One of the things I really liked about the novel is the fact that Harris doesn’t reveal everything. In fact, many of the characters remain somewhat mysterious – while readers will no doubt draw their own conclusions, Harris is rarely explicit about their natures. I’m looking forward to each of the characters developing over the course of the series. There’s a lot of potential for expansion, I think.

This wasn’t what I was expecting. Although, to be fair, I wasn’t really sure what to expect to begin with. The supernatural elements are pretty down-played, but they are definitely there – be it through Fiji’s witchcraft, Manfred’s clairvoyance, and… well, a couple of other things that to discuss would be spoilers.

Harris is in no rush to tell the story, but it won’t take you long to read this – not only is the book very focused (after the first 50 pages), but you’ll likely not want to put it down. It offers a welcome change in pace to the usual thrillers I read, and the added, understated supernatural elements were expertly woven into the story while also not drowning out the plot.

An excellent first experience with Harris’s work, I’ve become a new convert, and have ordered the first couple of Sookie novels to try. If you are already a fan of Harris’s fiction, then you won’t be disappointed by Midnight Crossroad. If, like me, you are new to her work, then this is as good a place to start as any other.

Definitely recommended. I really enjoyed this.

Midnight Crossroad is published by Gollancz in the UK and Ace Books in the US – both in May 2014.