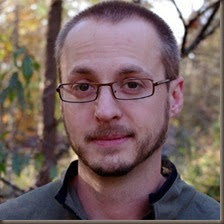 Let’s start with an introduction: Who is Jay Posey?

I’m pretty much a professional typist. Sometimes I like to tell people I work with my hands, which I guess is technically true. I’m author of the Legends of the Duskwalker series from Angry Robot Books, and I’m also a Senior Narrative Designer at Ubisoft/Red Storm Entertainment. I’ve spent almost a decade contributing to Tom Clancy’s award-winning Ghost Recon franchise as a writer and game designer.

Your next novel, Morningside Fall, is due to be published by Angry Robot Books in April 2014. It is the sequel to Three. How would you introduce the series to a new reader, and what can fans of the first book expect here?

The Legends of the Duskwalker series is a mid-future post-apocalyptic sci-fi with cyberpunk elements and heavy Western influence. The first book, Three, tells the story of a lone gunslinger who reluctantly agrees to escort a woman and her young son across an urban wasteland to a distant oasis in hopes of finding the boy’s father.

Morningside Fall picks up about a year or so after the events of Three, and continues the story of two of the first book’s main characters. Fans of the first book will get to see more of what the world looks like from inside one of the few remaining great cities, several new characters, lots of action and suspense, a few big surprises, and more about who and what the Awakened are. 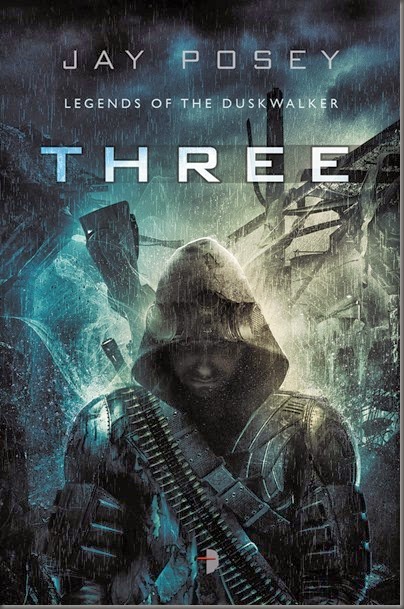 I’d had the basic idea of the story for Three for a while and had just never found quite the right setting for it. There were lots of elements I thought were cool and might be interesting to explore, but every time I started investigating one path, I kind of started to miss the other things I’d chosen to leave out. At some point I realized “Hey, I can do what I want if I just build a world where all these things can coexist.” Three, for me, was a small story in a big world. For that novel I was primarily interested in developing the relationship between the three main characters, and exploring ideas on heroism, sacrifice, and fatherhood. But the world I created let me play around with a lot of different ideas about technology and humanity.

I think my inspiration typically comes from a combination of my natural curiosity and my tendency to think a lot about human nature and why we do the things we do. I just like learning about things, so I read about a lot of different subjects, and then I can’t help but wonder what things mean for people in general. I ask a lot of what if questions, and that usually leads me into interesting places. Sometimes scary places. 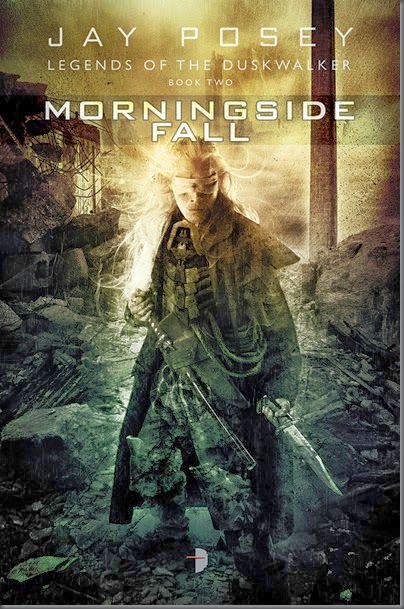 Like a lot of writers, I grew up in a family of readers, and given my interest in science and my tendency to daydream a lot, I was just sort of naturally drawn into the world of science-fiction and fantasy. Piers Anthony and Margaret Weis and Tracy Hickman were some of my first forays into genre fiction. I never really thought about it as being “genre” fiction, of course. Back then, I just called them books.

When I’m not writing, I love being a writer. Sometimes when I’m in the process of it, I feel sad and broken and I wonder what I’m doing with my life. But for the most part, it’s really cool to have reached a point where I can share my daydreams with other people in a way that they finding exciting, or moving, or entertaining.

I’m also blessed to be working with Angry Robot Books; they’re a publisher that embraces author individuality, and it’s refreshing to work with people who want to help you succeed and achieve your own vision, rather than trying to dictate what your vision should be.

What's it like, being an author? Is it what you expected? Do you have any specific working, writing, researching practices?

Well, I was assured that becoming a published author meant Instant Fame and Riches, so you can imagine my surprise when Three came out and there was no yacht waiting for me.

Other than that, I kind of go back and forth between being amazed that I reached this particular milestone (getting published) and trying to remember why I thought it was going to be such a big deal. I maybe thought that once I was a Published Author, I would suddenly find it so much easier to write books, but in fact it’s still very hard work, and I still have to wrestle with The Fear on a regular basis (as any creator does). Also, having become a part of that community, I have lots of friends who are published authors, so it doesn’t make me feel quite as special as I had thought it would.

But that being said, every once in a while I remember to step back and look at where I am now in my career, and I’m completely blown away by the fact that I wrote something that is out there on bookshelves in book stores and libraries, and people I’ve never met are reading it and sending me all sorts of very kind and generous emails about how much they love the work and how moved they’ve been by it.

As far as working, writing, and researching, it really depends on the project. I tend to do most of my writing at night, which is mostly a result of having a full-time job and a family. I don’t generally start writing until after I’ve put my kids to bed (after reading to them of course!), so that can make for long days. It’s also why I’m not as prolific as I probably could be, if I were a little more diligent. Research is sort of a full-time thing for me; I’m just interested in lots of different topics, so I tend to follow news and developments in a lot of different areas, and a lot of that ends up informing my writing.

I’ve loved writing since I was very young, but it wasn’t until I was in my mid-20s that I thought I might actually want to try to write at a professional level. I got my start as a screenwriter, which translated well into writing for video games, and then the novels grew out of a desire to create something that was truly my own rather than being creatively driven by someone else’s vision.

It’s funny because I occasionally find myself missing those very early days in elementary and middle school when I wrote with reckless abandon and had zero concept of character arcs or punchy dialogue or pacing. I’m sure those stories would be tedious and derivative to read, but back then writing felt a lot more like play than work so I certainly look back on that fondly.

I think there’s a lot of great stuff going on in the genre today; a lot of different kinds of stories with a lot of different voices, and it’s an exciting thing to be a part of. I honestly don’t know how or where my work fits in, but I hope I’m doing my part to continue to advance and elevate the genre.

I’ve got the third and final book in the Duskwalker series going on, and then a few other concepts patiently waiting in line for me to get to them. A short story of mine will be showing up in an anthology called War Stories from Apex Publications, and I’ve got a military sci-fi project that I’m working up. I’d like to tackle a more Young Adult idea I’ve had for a while, but I’m not sure when I’ll have time to get to it.

I tend to read a few books at a time, depending on my mood, so in my current pile are: The Warded Man by Peter V. Brett, The Darwin Elevator by Jason M. Hough, Empire of the Summer Moon by S. C. Gwynne, Makers by Chris Anderson, and The Consequences of Ideas by R. C. Sproul. 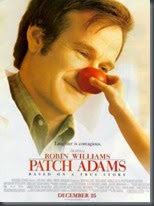 I was an extra in the movie Patch Adams, starring Robin Williams, back in the late 90s. I played a generic medical school student and I’m actually fairly easy to spot if you know who you’re looking for. Of course I had a lot more hair back then.

I’m really looking forward to attending Phoenix Comicon this year and getting to hang out with fans and other creators. I’m also going to be especially happy when I wrap up work on the final Duskwalker book.

Thanks for letting me stop by!