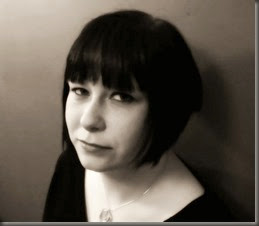 Let’s start with an introduction: Who is Jen Williams?

I’m a writer from south-east London. I wear odd socks and live with my partner and our cat. I have a Lego fixation and I own too many notebooks. I don’t get as much sleep as I would like, but then I like to sleep a lot. I think those are the important things covered.

Your debut novel, The Copper Promise, is out now through Headline. How would you introduce the novel to a new reader?

I like to describe it as epic sword and sorcery, so you still get a fat book that could conceivably be used as a blunt weapon, but the story moves at a tremendous pace. Two sell-swords of dubious morals are employed by a mysterious lord to explore the haunted Citadel of Creos, only to find that not only does their employer have a destructive agenda of his own, but that the Citadel is forbidden for very good reasons. A terrible force is unleashed on the world, and our heroes have to deal with it, even though it looks like they won’t actually get paid.

At the time, I had a few short stories out in the world, and I thought it would be interesting to release a series of novellas. I was also just coming out the other side of a serious Dragon Age: Origins obsession (a fantasy RPG videogame from Bioware) and my love of traditional fantasy had been reignited. I’d written books in various subgenres before, such as Urban Fantasy and Post-Apocalyptic Fantasy, or just Weird Secondary World stuff, but I’d never written something that was dragons, caverns, dungeons and taverns. I decided it would be fun to embrace all those lovely trappings of traditional fantasy, whilst writing them with a modern edge – there were a number of tropes I wanted to twist and play with, such as the Loveable Rogue, the Honorable Knight, and the Minions of the Dark Lord. I started writing the first novella (The Copper Promise: Ghosts of the Citadel) and fell in love with the world and the characters so much the quick novella project quickly became a big fat book. 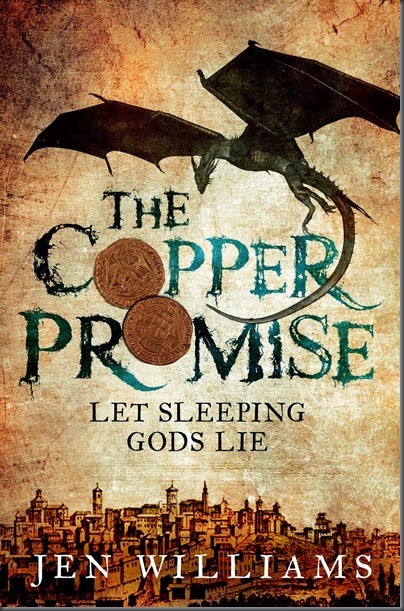 My very first exposure to the fantasy genre was probably stealing my brother’s Fighting Fantasy books so I could look at the scary pictures. A few years later I remember picking up The Fellowship of the Ring from the library shelf simply because it was so huge, and I figured reading such a thing would make me look really clever (I think I was about ten years old at the time). It was the first book I fell in love with, as well as the book that made me love reading. From that moment on I read almost exclusively in genre, hopping madly from Stephen King to Terry Pratchett to Neil Gaiman.

I love it. I’ve written a number of books and stories, with many probably doomed to remain forever hidden on a memory stick, but I don’t believe I ever really thought I would get here: to have an agent, a publishing contract, to see my book on the shelves of actual bookshops. It seemed like too wild a dream, the sort of thing that happens to other people, and there’s part of me that still doesn’t quite believe it. There’s also a sense of validation too: when I was growing up everyone told me that writing would be too difficult a career path, and so you spend much of your time worrying that you’ve made a mistake. What if I’m deluded? What if I should be doing something else entirely with my life? When someone comes to you and says, “Oh, I really loved that character. And I laughed so much at this bit. Also, why aren’t these two having sex yet?” you can breath a big sigh of relief because to that person at least, you took the right path.

The novel was originally serialised. How did this impact your approach to writing the story? Do you have any specific working, writing, researching practices?

The book was originally split into four novellas. The tricky part of such a structure was making sure that each section had its own complete story to tell, as well as advancing the wider, overall story of the book. It was also important that the book not seem disjointed or like a series of short stories, so themes and character development had to be consistent too. The fun part was being able to have a number of slightly evil cliffhangers, and getting away with cutting out a lot of what I think of as “transition stuff”: moving the characters to where they need to be, or showing the passage of time. From a practical point of view, this meant editing each novella as if it were its own book, and then putting the whole lot together into one document and editing it again with a view to how it worked as a complete manuscript.

I’ve had an interest in stories and wanting to write them for as long as I can remember. Two of the first presents I asked for at Christmas were a desk and a typewriter, and I cheerfully plonked out stories about dragons and pirates all day long. My first “proper” attempt at writing was a somewhat sprawling, heavily Pratchett-influenced book about a rogue witch and her scheming witch-mother. I started writing it one day after a particularly bad shift at work, and over the course of a couple of years it eventually became book-sized, and I even finished it. That book was significant for me because up until then I hadn’t believed that I could write an entire book, and although it’s full of enormous rookie mistakes and blundering cock-ups, I still have a lot of affection for it.

I think fantasy is in a healthy place at the moment, with a greater emphasis on a kind of realism, not just in the depiction of violence and the consequences of violence, but also in the depiction of characters. This feels like a good change, a move away from the lighter approach of farm boys who reveal themselves to be long lost princes, towards a genre that is taking itself a little more seriously. That is to say, we value what we do and we’re approaching it with the seriousness it deserves.

Which probably sounds like an odd thing to say given that The Copper Promise, as a piece of sword and sorcery with an emphasis on monsters and magic, is a slight step away from the Grimdark trend. What I hope is that the book takes the bits and pieces we loved from old school, pulp fantasy – the wild magic and the dungeons and the spectacle – and applies a modern approach, adding a degree of realism to the characters. I was very keen, for example, to have a female character who was not reliant on a male character to give her purpose as a love interest or a catalyst, and a gay character whose story is central to the entire plot, and so on. Generally I think fantasy is moving towards being more inclusive, and that’s definitely a good thing.

I’m in the midst of editing the follow-up to The Copper Promise, which is a slightly darker book but with the same themes of magic and monsters and general mayhem-making. Writing a sequel to a debut novel is an interesting and slightly alarming experience, because while I was finishing the first draft of book two, The Copper Promise was receiving its first reviews; it’s very hard not to get fixated on that, not to mention the added weight of deadlines and getting paid for the work. Behind the anxiety though I’ve had a great time hanging out with these characters again, and I’m already looking forward to getting into the third book.

As I’m knee deep in the editing swamp I’m finding it difficult to concentrate on a single book – once your brain is stuck in hyper-critical mode it’s very hard to turn it off – but I’ve just started Brandon Sanderson’s The Way of Kings, which has some of the most spectacular magic I’ve ever read, and Ash by Mary Gentle, which is an extraordinarily vivid experience. I’m not quite sure why I’ve decided to read two such enormous books at the same time, but when I need a break from all the epic I’m dipping in and out of Twisted Histories, a short story anthology edited by Scott Harrison, in which I also happen to have a short story, The Tides of Avalon. 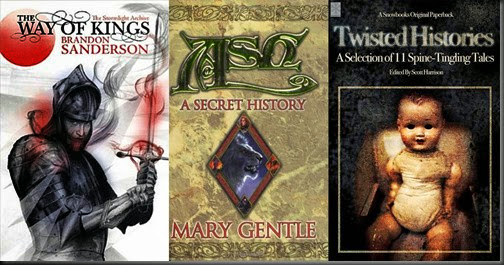 Despite writing a book that cheerfully embraces many of the tropes, I’ve never actually played Dungeons and Dragons myself. I was always far too shy as a kid to play a game that involved, well, talking to other people, and although as an adult I’m a fan of RPG video games I still have yet to sit down with the D20 and a dungeon master. Shameful, really.

Lots of book related stuff! Sending book two back to my editor and starting work on book three towards the end of the year, as well as continuing to fiddle with my notes on the fantasy series I’ll be writing once this current trilogy is finished. I’m very much looking forward to going to my first Fantasycon this year, and returning to Nineworlds in August, where I may even be convinced to attempt some sort of cosplay. Stranger things have happened.