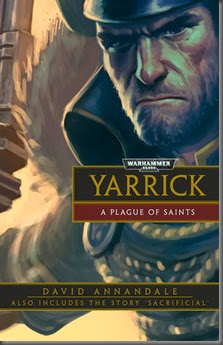 A quick look at an early mission

Heresy in a hive city has brought Commissar Sebastian Yarrick and the 252nd Armageddon Steel Legion to the barren world of Molossus. With the inquisition at his back and a ragged force of rebels before him, Yarrick must discover the cause of the uprising and bring it to an end. Venturing into the hive’s lower levels, Yarrick and the soldiers of the Astra Militarum discover a deadly horror in the shadows.

This release also includes the bonus short story ‘Sacrificial’, in which Yarrick and the Steel Legion face corrupted cultists.

This is a really good short story. Whereas Annandale’s first Yarrick story, the novella Chains of Golgotha, told us of the mission during which the Commissar met his arch nemesis, A Plague of Saints takes us further back. Here, Yarrick is a relatively short-in-the-tooth Commissar, not yet risen to the heights of heroism and respect that long-time WH40k fans will be familiar with. All in all, it’s a great story, and helps flesh out one of the Imperium’s most interesting (human) characters.

Yarrick has been dispatched to a world seemingly in revolt. He’s attached to the Armageddon Steel Legion Guard regiment. An inquisitorial team meets them on arrival, and things almost immediately appear sketchy. What are the inquisitor and his henchmen getting up to? What is causing the lower-level inhabitants of the Hive to revolt?

A Plague of Saints has all the hallmarks that I’ve come to expect from Annandale’s fiction. It is expertly crafted, and populated by interesting and well-rounded characters. The author’s prose is fluid and evocative, without being over-done. And he’s an expert at atmosphere and locating the reader in the story without info-dumping or over-describing. Later in the story, the author manages to paint a picture of tense menace, furious combat, and just a shade of horror. [No spoilers, here!] This is probably one of the best short stories I’ve read from BL in a while. Annandale just keeps getting better.

The micro-story included in this eBook, Sacrificial, was a short, sharp display of how ruthless Yarrick can be in executing his prerogative. A good addition.

Annandale’s done a great job bringing this character to life. I am very eager to get my hands on the full-length novel, Imperial Creed. Absolutely recommended for all fans of WH40k and military science fiction.

Posted by Civilian Reader at 1:40 PM