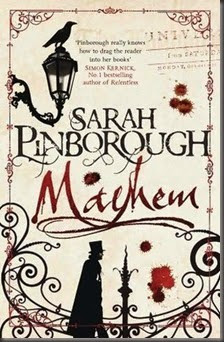 A new killer is stalking the streets of London’s East End. Though newspapers have dubbed him ‘the Torso Killer’, this murderer’s work is overshadowed by the hysteria surrounding Jack the Ripper’s Whitechapel crimes.

This is the first of Pinborough’s novels that I’ve read, and I rather enjoyed it. It has all of the elements that I look for in fiction, in one tightly-written package: crime, investigation, mystery, a dash of the supernatural and horror. It’s an excellent mix, well-executed. And it’s the first in a series.

I guess I should start with what I liked most about Mayhem, as it is something I feel very strongly about when it comes to historical fiction of any kind. Specifically, the ‘world-building’. In Mayhem, we are never under any illusions that this is not Victorian London. There were no anachronisms that stood out, and it always felt very of-the-time. “Don’t other authors do this?” you might ask. Well, of course they do. But the way Pinborough does it is superb – she doesn’t bury the reader in period detail. She does not constantly remind us of the time period by presenting endless amounts of (frankly dull) detail about every little thing – significant or otherwise. We do not get long passages describing each characters clothes, or the designs and building materials of every building. Details are plentiful, but Pinborough weaves them into the story in such a way that the flow of the narrative is never upset by boring, needless info-dumps. This is a lesson that most fantasy authors should take to heart, too.

This novel is, therefore, quite lean. I blitzed through it rather quickly, and for the main thought it was absolutely superb. It’s tightly-plotted, written in fluid and natural prose, and populated by interesting and colourful characters. I particularly liked Dr. Bond and his denial over his opium addiction. The supernatural element is sufficiently dark and creepy, and nicely done. 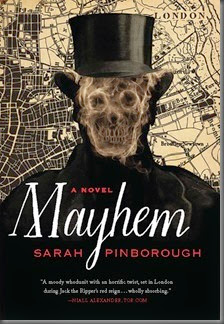 At the same time, however, a wrinkle presented itself. By making the novel so lean and quickly-paced, there were moments when the narrative jerked forward a little bit – or, at least, that’s how it felt at the time. By making sure that the levels of details and Proving It’s Historical Fiction were at a minimum, I felt that we sometimes missed out. It would have been nice, for example, to get to know a little more about certain aspects of the novel, and certain characters’ backstories. This would, of course, have threatened the flow, which would have been a loss, for sure. Given that this is only the first in a projected series (book two, Murder, is published in the UK on April 30th), my worries are less pronounced, as I’m sure we’ll get to know the key characters over the course of subsequent novels.

In short, this is a satisfying historical novel, one I would recommend to fans of both historical fiction, crime fiction, and also urban fantasy fans. It is not perfect, and the ending felt a little jerky, but I really enjoyed reading it. Which is really what everyone wants from a crime thriller.

I can’t wait to get stuck in to Murder, which is very nearly at the top of my TBR mountain.

Mayhem is out now in paperback in the UK, published by Jo Fletcher Books. Murder is published on April 30th 2014 in the UK. Mayhem was published in the US in January 2014. I’m not yet sure of the official publication date for the second novel in the US.

Email ThisBlogThis!Share to TwitterShare to FacebookShare to Pinterest
Labels: Review